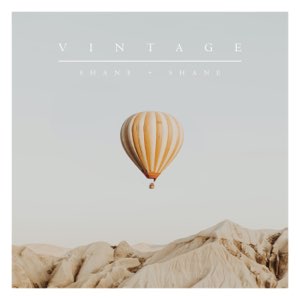 Shane & Shane are pretty much an enigma at this point- you never really know what is coming up next. After releasing volumes upon volumes of The Worship Initiative in the form of cover worship songs over the years (of which you can view our reviews of these albums here), this duo once signed to Inpop Records, are such a duo that I heavily respect and admire, a duo that has become such a band that has delivered quality worship songs- covers, originals and in-between. Shane Barnard and Shane Everett have created a brand for themselves that I have come to be reminded that songs, especially worship songs, supposed to be, and should, transcend the artist that was originally singing it, every time. And Shane & Shane, through their Worship Initiative movement and ministry, have done exactly that- remind us all that these artists are just vessels for these songs, be it songs from today, yesterday or even yesteryear, to take life and shape in a way that can be accessible to people who may not have had access to it, for whatever reason, in the past. The Worship Initiative and everything that has sprung to life from 2014 onward has been a big impact for me in my own life, and I’m sure people can say in their lives too. 21 Volumes of The Worship Initiative later, Shane & Shane are embarking on something new- an album titled Vintage, that just released on July 10th, 2020.

I reviewed ‘Sometimes By Step’ and ‘Draw Me Close’ last week (it can be viewed here), and back then, I didn’t really have any indication, if any, about what songs would be on the nostalgia-filled album. Nevertheless, this surprise release from the Shane duo (surprise in the term of how I didn’t really expect anything else from them other than their Worship Initiative material- for the foreseeable future) is what was needed for myself to be reminded of the power of music and the ability of songs both of old and of new to impact a life. Regardless, what I said about ‘Sometimes By Step’ and ‘Draw Me Close’ is still relevant and true about the whole album Vintage too- that the vintage songs these two men have grown up with over the years and are now given a ‘Shane & Shane’ treatment, songs that have an impact on Christian music or just music as a whole in the past; are songs that remind us that newer isn’t always better, and that often the songs of old that are sadly placed on the metaphorical ‘shelf’ are just as poignant and emotive as the music of today. Both ‘Draw Me Close’ and ‘Sometimes By Step’, alongside other 1990s tracks here on Vintage– ‘Breathe’, ‘Awesome God’, ‘I Could Sing Of Your Forever’, ‘As the Deer’, ‘Lord I Lift Your Name on High’ and ‘Ancient of Days’, to name a few; have all been instrumental in facilitating a heart of worship during the 1990s. It is a reminder of the timelessness of songs like these melodies. I can remember a lot of these songs growing up, they’ve become a bit part of what I did during that time, who I was, and who I still am today. Songs that have shaped who I am right now came from the 1990s, and so it’s good to see one of the most well-known worship cover bands tackle songs from Rich Mullins, Kelly Carpenter, Marie Bennett and Delirious?, and place their own spin on it all.

For listening to these melodies- ‘Draw Me Close’, ‘Ancient of Days’, ‘Sometimes By Step’; I am reminded that music is so much more than the time period it was written in. Yes, songs were written around that time, often primarily for the people during that time, in mind; nevertheless, the thing about music is that it can travel across periods of time and space and impact a people group or a generation far removed from whence the song/album came. Shane & Shane’s new album Vintage showcases an era of music where Christian melodies, especially worship ones, became influential, and formed the backbone of where we are today in terms of worship music in the modern era. With Vintage being in a similar vein to The Katinas’ Timeless or Avalon’s Another Time Another Place, Shane & Shane give us a timely revelation, that songs that have challenged and impacted us all back then, are still as relevant as ever, now. This is a must-have for anyone who loves 1990s music, or who enjoy songs of yesteryear and sees the merit in how these songs have impacted humanity and music over the years. Well done Shane Barnard and Shane Everett for this 10-track nostalgia album. Who knows, maybe a nostalgia-CCM-pop album next, tackling artists like Steven Curtis Chapman, Michael W. Smith, Amy Grant and the like, next? I’d be excited for that!

3 songs to listen to: Draw Me Close, Ancient of Days, Breathe