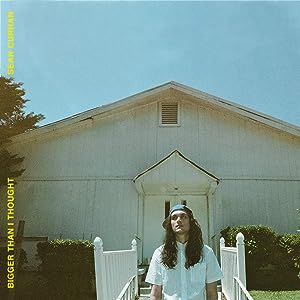 Do you remember way back in the day when Sean Curran was the lead singer of alternative/CCM rock band Bellarive? It seems like forever ago that Bellarive even existed, but they did, and gave us 2 solid worshipful albums, before the band left with no press release about what was happening, not until Sean showed up himself in Passion Conferences and I guess now the rest is history. With no formal statement regarding Bellarive’s disbandedment, nor even an official press release of Sean himself joining Passion full time in a band capacity; Sean Curran nonetheless is known primarily for his songwriting, giving us great melodies, be it part of Bellarive or even part of Passion, from songs like ‘Lazurus’, ‘Real Thing’, ‘Worthy Of Your Name’, and ‘Taste of Eternity’, to others like ‘Heaven’, ‘Almighty God’, ‘Calling on Fire’, ‘Bring Us Back’, ‘Sing’ and ‘Your Great Love’; to name a few. Now here we are in 2019, and Sean continues his involvement with Passion and their annual conferences. But that doesn’t mean that that is all he does. Sean has recently unveiled to us his debut EP on Capitol CMG, titled Bigger Than I Thought. An artist that is very much poetically inclined and lyrically sound as any other artist (similar vocally and thematically to that of Leeland or All Sons and Daughters); Sean’s music is a must have if you love worship music, with a little musical freedom and a heartfelt message of entering into a place of worship without any worry or expectation. Comprising of Sean’s new single ‘Live Again’, alongside a live version of ‘Step Into the Light’ from their annual 2019 conference; these 6 songs have been some of the most emotional I’ve heard in relation to worship music since a flurry by either All Sons and Daughters and The City Harmonic.

Released as the first single from the EP, ‘Live Again’ was first unveiled in May 2019, and straight away, it reminds me of a Bellarive-style worship song. Which isn’t a bad thing, it just reminds me that bands come and go, and that often a band that sticks together for a long time (a la Casting Crowns or MercyMe) need to be applauded. Nevertheless, Sean himself is still making music, which is a positive. And out of this music that he has been pouring himself into (through the guise of Passion Music) comes ‘Live Again’, a song about calling upon the power of Jesus’ name. As we fully believe into the fact that the God we serve is the God of the impossible, that He knows us, and still longs for His plans to come into fruition, even though we may try real hard to run from whatever He’s calling us to undertake; ‘Live Again’ comes off our tongues as we heartfully pray that in Jesus’s name, ‘…the blind will see, the sick will stand, sing hallelujah with confidence, let healing come, let mercy in, sing hallelujah and live again…’ ‘Step Into the Light’, originally released earlier this year as a standalone single, apart from Passion’s Follow You Anywhere, Sean encourages us all as Christians (and maybe even as non-believers) to step into the light where every secret and every burden can be made visible; because of the notion that God’s love and the love we receive from family and friends (unconditional) means we don’t have to hide the ugly and not-worthy parts of ourselves. Both ‘Live Again’ and ‘Step into the Light’ are standout songs on the EP and both remind us all that someone like Sean, a great worship leader, is rising up a generation of worshippers that are joyous and happy when they worship. Sean is enthusiastic, and while I may still mourn the death of Bellarive for some time; Sean’s new songs are a breath of fresh air into a worship music scene that can seemingly drag with music from certain similar artists, again and again and again (I’m looking and you, Hillsong and Chris Tomlin!).

Thoughout the rest of the album, we are reminded of the worship music that can and should be in churches around the world, come years’ end. ‘Can’t Live Without You’, a guitar led, and a standard-worship-fare melody that showcases Sean channeling his inner ‘Leeland’; is a great first track, and a reminder that in very circumstance we’re in, we can’t live without the love of Christ in us and moving through us, encouraging us with ever decision we make. The only reason we live is because of Christ, and thus, a song like this one, is one fitting to declare, but only when we fully understand the gravity of what Christ did for us to be even allowed to run back to the Father in awe and apology. ‘All Praise’ is a song that has a Jesus Culture meets Bethel Music vibe, and maybe that’s ok, a song that I’m sure will be destined to be sung among churches on a worldwide scale as the year continues to progress, as Sean himself declares from the outset that every praise we want to give or even utter, should only be to God alone, knowing full well the lengths that He went to for us to be reconciled with Him- for freedom doesn’t come cheap, and once we know this, then all the praise will indeed flow freely.

The EP then finishes with ‘The Great Migration’ and ‘Bigger Than I Thought’, arguably the two most underrated songs on the EP- mainly because of the rousing nature and the enthusiastic passion that Sean displays in the other four songs on the EP. Nevertheless, ‘The Great Migration’ is used as a clever metaphor, using the themes of a great migration, something that animals do on a regular basis as the seasons change and they want to move locations around the world as a way to undergo and undertake their regular routines thoughout the year; to imply that we as Christians migrate one-way from who we once were to who Christ wants us to be in Him. ‘Bigger Than I Thought’, originally from Passion’s live album Follow You Anywhere, was a highlight on the Passion album, and also a highlight here. Sean concludes that God is bigger than anything we can ever conceive of Him to be. Therefore, He can handle all our cares, doubts, fears and bargaining, all the while knowing that whatever we feel and our disgruntlments can be handled by the Lord with much grace and comforting, as we know that He is in control in the moments where we especially can’t see!

Bigger Than I Thought EP is by far one of my favourite EP’s of the year thus far, and one of my favourite ‘up and coming’ (I say this in inverted commas because though Sean is not new in that he was in Bellarive before, he is a new artist in terms of him singing solo and in a genre of worship!) artists of the year. One of the many ‘new’ faces of Passion, inclusive of Melodie Malone, Kristian Stanfill and Brett Younker, we see a new era of Passion as the old guard of Chris Tomlin, Christy Nockels, Crowder and even Matt Redman move on in all sense of the word, to bring us music from different avenues…and that’s ok. The ever-changing landscape of Passion, and in effect, the changing landscape of worship music and worship artists as a whole; is very exciting- Sean’s new solo music is evidence of this. A must-have if you enjoy modern worship music along the lines of Passion and all its worship leaders; Sean’s new EP is just the start of a hopefully long career of music that can hopefully shake up the notion of what worship music should look like and sound like to a new generation. Well done Sean for giving us Bigger Than I Thought EP, can’t wait for a full-length album, whenever that may arise!

3 songs to listen to: Live Again, Step Into the Light, Bigger Than I Thought