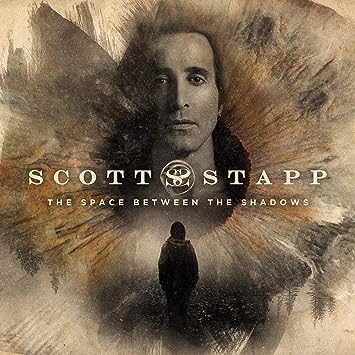 Scott Stapp– The Space Between The Shadows (Amazon mp3/iTunes)

To be honest, I haven’t been the greatest Creed fan ever. In fact, I only know one song of theirs- “With Arms Wide Open”. However I do have to say that these guys were super popular and influential at the time of the late 90’s, yet for some reason, I have found while doing my research, that Creed is one of the most hated bands ever alongside Nickelback. I found a pretty good question and answer page about the reasons why they’re hated- so I won’t delve into these reasons and I’ll instead link the article here, so that you could read if you’re curious. But from what I have gathered, Creed was mostly hated because even though they weren’t classified as a Christian rock band, almost all of their songs sounded as if they were directed to Jesus or were about the Christian faith in some round about way. And being that most of their songs were about Jesus, it seemed perhaps hypocritical and blasphemous as lead singer Scott Stapp turned up to many rehearsals and concerts drunk- the way he acted towards the band’s latter stages of their career was probably embarrassing for them and the fans.

Maybe it was similar to how John James (former lead singer of the Newsboys) was acting before he left the band; but regardless, from the band breaking up until now, Creed hasn’t been that popular nor respected. Is this band-bashing warranted? Perhaps, or maybe not. Regardless, here we are in 2019, the success of Creed probably a distant memory for some of us. But…Scott Stapp, for better or worse, is back, reminding us that he’s still got more things to say, this time as a solo artist. If you’re a fan of Creed or just good rock music with a positive or inspirational message, then I’m sure you’ll love Scott’s latest solo offering The Space Between The Shadows. But if you’re not a fan of Creed due to their past…well then maybe listen to this album in a few years’ time once you’re more indifferent to the band. Either way, Scott’s album needs to be listened to, even at least only once. Guaranteed there will be a song that speaks to you!

“World I Used To Know” is a head banging hard rock anthem that beautifully starts the album in true modern rock fashion, as Scott’s raspy vocals brings to the fore raw emotion and brutal honesty. Some listeners may believe that this sounds too much like Creed; but even if it does, why do we need to be stuck in the past and crucify someone for something that happened years ago, when what we need to do is forgive? Regardless of our own preconceptions of Scott, the way he starts off “World I Used To Know” is quite impressive, as he eloquently details that he wants to get back to a world that he knows from before. “Name”, the quasi-title track, is another personal standout, as Scott delves into his fatherless past, and then affirms the fact that he will be forever present in his own son’s life. Emotional and probably the most personal song on the album, “Name” reminds us all that even if our earthly fathers aren’t present for the important moments in our lives, doesn’t mean that we have to repeat the cycle that they did, nor does it mean that there is no father figure we can turn to- we can turn to Jesus and He can be our comfort and our shelter. Lead single “Purpose For The Pain” amps up the tempo, drums and the searing guitars, as Scott fervently sings out that ‘…there’s gotta be more ’cause this life is insane, gotta turn this around and find the purpose for pain…’, trying to make sense of the chaos in this world by hopefully finding some greater meaning and plan; while “Heaven In Me”, an acoustic guitar prominent ballad, alludes to the fact that even when everything around us is crumbling, even when our foundation is irrevocably broken, Jesus still remains and there’s still ‘…a little Heaven in me…’.

“Survivor” could easily be sung to the devil or even to the haters and the doubters, as Scott reiterates across driving guitars that he is a survivor and no one can bring him down- and I reckon that Zach Williams who has a song of the same name, would be proud!; while the more subdued and reflective “Wake Up Call” features Scott at probably the most vulnerable and emotional, as he pleads with us that ‘…this is a wake-up call before there’s no one left to catch your fall, but you can change it all if you want to…’. I’m not sure who the song was directed to, however I am sure we can all claim the message as our own, as we all need our own wake up calls so that we can carry on in life with no regrets and live it to the full. “Face Of The Sun”, probably the hardest song on the album musically, subtly alludes to a spiritual battle occurring right now between the powers of darkness and principalities, as we are also encouraged to rise up above those who hurt us, and treat our enemies with respect like Jesus did, with Scott delivering powerful lyrics similar to U2’s “Pride (In The Name Of Love)”l yet I find that it is “Red Clouds” that is the pinnacle of the album- this 5 minute slow-burn rocker features Scott prayerfully asking ‘red clouds’ aka The Holy Spirit to come and fill his heart and make this world a better place to live in.

“Gone Too Soon” is definitely the most radio friendly song of the bunch, but don’t let that throw you, as there’s some pretty heavy lyrics here- with Scott powerfully paying tribute to the lives of Chris Cornell and Chester Bennington who both passed away last year, and were both influential in terms of modern rock music. “Ready To Love” follows, and has Scott vocally doing his best Mac Powell impression, and has Scott emphatically declaring that he’s ready for the next stage in his life, and ready to finally put the past behind him, walking into what God has called him to do next. The final two anthems are “Mary’s Crying” and “Last Hallelujah”. While the former track a no-holds-barred warning to us, and Scott calling us all out on our actions or inactions in every situation we’re in, letting us know that Mary the mother of Jesus is crying because of everything happening here on Earth; while the album ender is a culmination of Scott’s spiritual journey to date- the chance to say thanks to God for everything, just in case it’s his last day on earth. With that, The Space Between The Shadows ends- and though Scott Stapp and his career with Creed is quite controversial, there’s no denying that these songs still contain the passion and heart he’s had since day dot.

You may not be a big Creed fan. I certainly am not (yet!), but that doesn’t mean I don’t know good music when I hear it. And Scott Stapp’s project is in fact a good album. No matter which way you look at it, Scott Stapp can stand on his own two feet alongside rock artists like Skillet, Linkin Park, RED, Disciple, Underoath and Anberlin. And that’s no mean feat. as for whether you should listen to Scott’s new album- well, all depends on your outlook on life and your faith- given that Scott’s a firm believer in Christ and the message of hope bleeds through his music. But I’d say yes- you may be surprised to find your summer/winter anthem of hope and comfort. Well done, Scott; may you have many more albums releasing in the future, and may you shine for Jesus in each effort as well!

3 songs to listen to: Wake Up Call, Red Clouds, Ready To Love