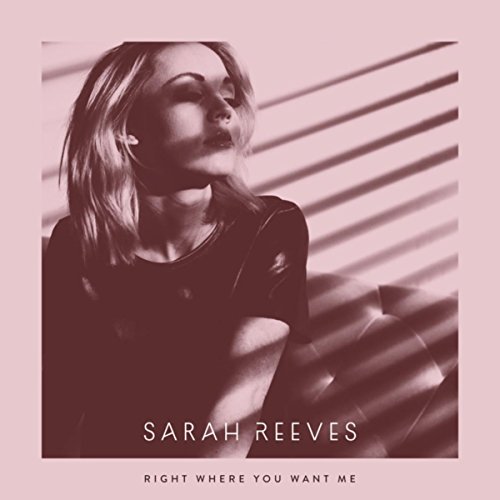 Sarah Reeves– Right Where You Want Me (iTunes/Amazon mp3)

Sarah Reeves has been within and around the music industry for quite some time. Since her Sparrow records debut way back in 2009 with her chart-topping song ‘Sweet Sweet Sound’, followed up by an EP in 2010 (God of the Impossible) and a full-length indie album in 2011 (Broken Things); sad to say, that after her 2011 album that featured her popular song ‘Mighty Wave’, we didn’t hear from her for quite some time. Until 2017. Sarah, quite possibly one of Christian music’s most underrated worship artists, went underground with radio silence up until earlier on in 2017 when she released her comeback song ‘Nowhere’. Signing on to Word Label Group, this is a new season of growth and song-writing for Sarah as she embarks on the journey to release another studio album very soon (her new album is slated to release sometime in 2018!). And now to tie us over, we have had the pleasure to hear a number of songs that are almost certain to be on the album (or will they)- ‘Nowhere’ and ‘Details’ that released last year, and her new song ‘Right Where You Want Me’, that just released in early January 2018. And yet while Sarah has in effect been silent from radio for the better part of this decade, she still is active on her youtube page, releasing over the years famous worship covers, reminding us all that it doesn’t matter on who sings the songs, but rather, the passion and enthusiasm behind it all. Sarah has the passion and enthusiasm, shown very much in her cover videos as well as her original songs of late. ‘Right Where You Want Me’ is included in this assessment.

And so what does this song display, when it all comes down to it? As Sarah divulges, about not only this song, but what the vibe of the whole forthcoming album will be about, we hear her say that ‘…the past two years I have been on a journey of writing, creating and developing a sound…a sound that has been stirring in me for a long time. For so long the ‘worship leader’ and the ‘artist’ in me battled one another. I was scared, of what people might think if my worship looked and sounded different. After surrendering that fear, I tapped into a freedom of creativity that I’ve never experienced before. I let go of what I knew and just started writing from my heart. Out came melodies, sounds and lyrics that inspired me and made me come alive. I guess this journey has been finding myself in a way…’ ‘Right Where You Want Me’ is as EDM as ‘Details’, and while looking back on it, I gave ‘Details’ a negative review (that you can read here), upon reflection, the song itself has grown on me. I myself am hesitant at listening to any worship that has an EDM feel (because I myself aren’t fully reconciled about what worship music is and what it should sound like). Nevertheless, Sarah’s music last year challenged my own assumptions and assertions about worship music in general, and if I were to give a review again of ‘Details’, it’ll be much more positive.

Still, here we are, hearing this new song, ‘Right Where You Want Me’. A song where worship, pop and EDM collide, this is a song to listen to in the car or at home…or maybe incorporate into Sunday morning worship services, because…why not? We all as society have a set structure about what worship music should be that we don’t all the Lord to move, especially in the ways can could seem foreign to us on the surface. Sarah’s song is unique and bold, anthemic and heartfelt, emotive and poignant, even progressive and challenging, as there ought to be more artists like her that can challenge worship music and reinvent and revolutionise what we think it ought to sound like compared to what God says it should be. Sarah is fast joining artists like UNITED, Crowder, All Sons and Daughters, Tim Hughes, Matt Maher and Phil Wickham, all who continue to stretch our minds to be more open to receive new ways of how worship music is represented in the marketplace where we are. ‘Right Where You Want Me’ is one of these songs that will be influential in the worship music genre as the months continue; but may not necessarily be as popular now…and that’s ok. And with the first verse starting with the hard-hitting truth that ‘…if I’m a target for the enemy, then it means I’m where I’m supposed to be, there’s a war that’s raging over me, but I know the One who holds the victory…’, how can you not love it, a track that has been challenging in my own life of late, as I’m reminded that where I am right now is where I’m supposed to be. That God has placed me where I am for a reason, even if it not known to me, and thus, I have to be faithful and trust that whatever is in store for myself in the future is far greater and beyond anything that I can even comprehend or imagine at this moment!

There you have it… ‘Right Where You Want Me’! And even though this new track from Sarah is quite possibly the most different song she’s ever written and recorded in her career thus far; it is good to see Sarah experimenting with a song out of her comfort zone. And with songs like “Nowhere”, “Right Where You Want Me” and “Details” as a pre-cursor as to what the new album from Sarah would sound like, then her forthcoming album is one to be excited for. A certain purchase if you enjoy worship music, Sarah Reeves is an artist that, still relatively up and coming even after quite some time, will hopefully receive the recognition she deserves after ‘Right Where You Want Me’ and her new album. Well done Sarah for this song as well as her other two released last year, can’t wait to the full length album whenever it releases!