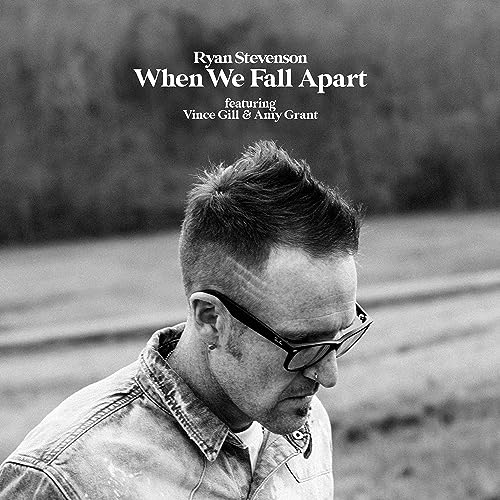 One of the mainstays on Gotee Records, alongside Cochren & Co., Aaron Cole, Courtnie Ramirez, Richlin, Jon Reddick and Terrian; Ryan Stevenson has been creating music for the people, and songs to inspire us all for a while now. Yet, if I am to be very frank and honest; prior to his powerful and emotive radio single, “Eye of the Storm” that peaked as high as #1 on Billboard Christian Songs Charts in 2016, I’m not even sure that many people even heard of Ryan and his music. I mean, even though Ryan has been within the music business for a few years, releasing an EP Yesterday Today Forever on BEC Recordings and Holding Nothing Back, his new 2nd EP, on Gotee Records in 2013, it was his debut full length album Fresh Start, that featured “Eye of the Storm”, that really placed this new singer/songwriter on the map of anyone who loves CCM (like myself). While much of CCM’s most popular, started their career in music at relatively young ages, Ryan previously held a job for a while as a paramedic prior to switching to music full-time. That’s what I reckon makes Ryan and his music so appealing, heartfelt and relatable- the fact that he undertook a regular average joe job before doing music, we can understand that when he sings about the daily struggles in life, he can actually relate. We think, ‘gee, this guy is not just an idealistic musician who has no idea what the common man deals with each day, he is like us, he did have a career in a ‘normal’ job prior to this, so he knows what we’re going through’. Not that I think like that when I hear music from any artist- think whether the song is even relatable to me given the background of the artist singing it, but Ryan’s position is a unique one.

Since his debut album on Gotee Records in 2015, Ryan has imparted to us emotive and encouraging songs, all reminding us of the necessity of Christ in our lives. No Matter What released in 2018, that featured the empowering and emotive title track (that featured Bart Millard, lead singer of MercyMe), alongside other standout songs like ‘The Gospel’ and ‘Lift You Up’. In 2020, Ryan again unveiled to us a powerful and emotive album titled Wildest Dreams, that featured singles like ‘Amadeo’, ‘When We Fall Apart’ and ‘Mercy In the Dirt’ (you can read my review of the album here). Now fast-forward to 2021, and we see yet another release from Ryan- on the back of Wildest Dreams, Ryan has unveiled to us a new version of ‘When We Fall Apart’ (arguably one of my favourite songs of Ryan’s since ‘Eye of the Storm’), this time featuring husband-and-wife, Vince Gill and Amy Grant. One of the modst anticipated collaborations in CCM ever since…well, since Tori Kelly and Lecrae’s collaboration on ‘I’ll Find You’; Ryan’s collab with both Vince and Amy is a moment of poignancy and heartfelt emotion as this song continues to become one of my favourite songs over the 2020/21 time period!

‘…All of us have lost somebody … either a family member, an acquaintance, a co-worker and I just think it’s brilliant to sing this song while we’re all collectively experiencing so much loss. And at the same time experiencing such a deep appreciation for the gift of each other. I love how this song is a conversation now and a timely one…’ [Amy Grant] ‘…the last words my mother spoke to me are the words to this song. Even in the face of imminent death, she was pouring out wisdom and words of healing and encouragement to me that it’s OK to cry, it’s OK to grieve, it’s OK to fall apart. We are all going to experience loss at some point to some degree. This song has been my way of working through and navigating one of the most painful storms of my life…’ [Ryan Stevenson] Ryan’s new song, from Wildest Dreams, can be read as part of the review of the album here. ‘When We Fall Apart’, the new recording, is nothing different lyrically compared to the original, but what I will say about the song is this- the track is real, honest, poetic and at times unsettling as the song itself calls for the theme to be brought to the fore, that sometimes the only things that will bring us healing are the things that will ultimately make us fall apart. Sounding very dichotomous though, I am nevertheless reminded that in many circumstances, I am faced with the reality that it is in our weakness and brokenness that we can realise the things we’ve been holding onto for so long, be it through our shame, worry, discontent, uncertainty and assumptions about people and life and God, will only be brought to the light when everything else fades and all we’re left to cling to is either the truth of the Word of God and what it says about circumstances, or the things we’ve grabbed to for so long during times of despair and uncertainty, and that may not always be tied to what Jesus says. As I’ve also discussed in the review of Ryan’s full-length album, of his own personal inspiration behind the song; we’re nevertheless reminded how such a track can encourage us all to be a vulnerable human being, ho isn’t behind masks and facades, but rather, answers the call of Christ to be real to our fellow man, so that others can see that realness that we often speak of.

Ryan Stevenson: Released this new track, which will be part of his upcoming EP titled Weathering the Storm that will be unveiled in May 2021 sometime. Is hosting a podcast also titled ‘Weathering the Storm’, released via the K-Love AccessMore network. Has released a new book titled Eye of the Storm: Experiencing God When You Can’t See Him recently. But above all else, Ryan’s music is generally a welcomed surprise, and this song is no different. A song that’s going to continue to be one of my favourites, not just from him, but one of my favourite CCM tracks from the last couple of years, Ryan’s work on such a vulnerable song as this, ought to be commended and respected for what it’s worth. Well done Ryan for such a powerful and life-changing song, something that reminds us all of just how talented Ryan is and how all encompassing his music means- infectious, joyous, happy, and confronting all at the same time.