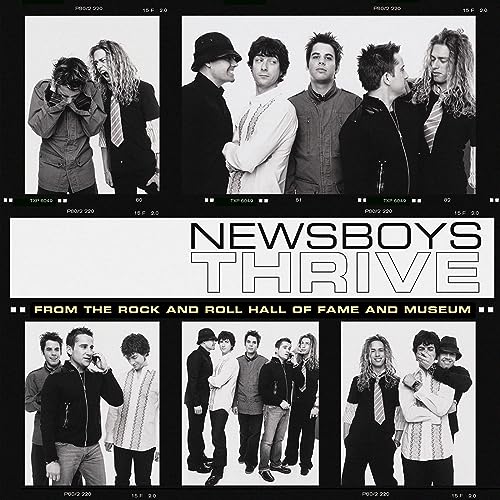 Newsboys are a band with no introduction needed. In fact, let my blog do all the introducing when I wrote about the Newsboys in 2019, as part of my Top 100 Influential artists list…and now that we have all established that the Newsboys are in fact one of the most impactful and influential CCM bands in modern music history, we see in 2021 another release in the arsenal of this 6-piece united band, comprising of both Peter Furler and Phil Joel in addition to Michael Tait, Jeff Frankenstein, Jody Davis and Duncan Phillips. This time the release is…Thrive: Live From the Rock & Roll Hall of Fame.

Yeah, you heard me right. With all the restrictions because of COVID-19 across the world, and many bands postponing release of new, original material, we see various bands and artists travel deep within the archives, and release previously unreleased material, songs and albums that may not have seen the light of day, if it wasn’t for COVID-19. And Newsboys and the release of this live project is no different. This is a very iconic moment in Newsboys history- the DVD format of this recently unveiled CD- released way back in 2002 as a concert to celebrate their 2002 album Thrive, the DVD highlighted Newsboys songs throughout the 1990s and early 2000s (inclusive of songs like ‘Shine’, ‘Breakfast’, ‘Take Me To Your Leader’ and ‘Entertaining Angels’), and also featured songs from their new album (in 2002) Thrive– songs like ‘Thrive’, ‘Lord (I Don’t Know)’, ‘Million Pieces’, ‘It is You’ and ‘Rescue’. Now after 19 years, Thrive: Live From the Rock and Roll Hall of Fame is now in audio format for our listening pleasure, as the audio from the DVD is stripped and placed here on this digital release, that released to us all at the end of April 2021. Now we may not have heard much of Newsboys 1.0 (we may have only grown up with hearing Michael Tait as the lead singer of Newsboys), or we could still appreciate and prefer Peter Furler’s lead singing as opposed to Michael’s. Whatever the case, Thrive: Live From the Rock & Roll Hall of Fame, alongside One Night in Pennsylvania, has been some of my favourite DVD concerts by any CCM artist I’ve seen in quite some time, maybe even rivalling Steven Curtis Chapman’s live DVD he did way back in 2003. Regardless of whether we’ve seen the Thrive: Live From the Rock & Roll Hall of Fame or not, this album nonetheless is a great treasure for any Newsboys enthusiast, or for any fan of CCM, period. Nostalgia can be a wonderful thing, especially during COVID-19, as we are reminded that sometimes, our songs of youth and what we grew up listening to, can be just as emotive and powerful as songs of today. That songs of familiarity can give us comfort, for such a time as this. And this ‘new’ album by Newsboys is nothing different. And so, as I finish of this ‘review’, I must say this- that songs of ‘old’ don’t have to be discarded just because something new comes along. I can still appreciate music of old, while still welcoming new songs as they release. This ‘album’ is evidence of how such an album of an iconic past, can be released new for a new generation…and maybe, just maybe, other artists can follow suit. Maybe Steven Curtis Chapman’s LIVE 2003 DVD can be released as an audio, digital album next? Now off to watch Thrive: Live From the Rock & Roll Hall of Fame now, and be reminded that Peter’s vocals, by far, was in fact one of the reasons why CCM in the 1990s and the 2000s was that good!