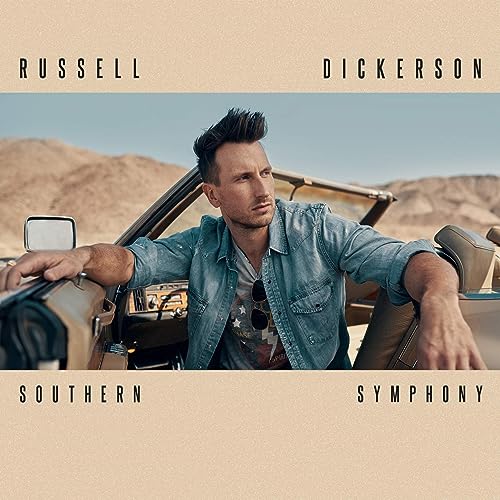 Oh man…this whole album is a compilation of my life, from the title track “Southern Symphony,” which goes back to my childhood and how I was raised. I was born and raised in Tennessee, so the song talks about my Southern upbringing and has those (lyric) phrases that I was raised with, like “washing up before supper,” and “don’t talk back to your mother and get your butt worn out.” So that goes back to my childhood, and then all the way now to my current single “Home Sweet,” which talks about when my wife was pregnant and we were having a baby in our new house and moving in. So it covers the expanse of my entire life, and it’s a lot more mature than my first album.

My first album (Yours) was super fun and more poppy. The Southern Symphony album is more mature, the songwriting is deeper…the emotional depth is there. So I could not be more proud of those 10 songs on the new album.

In this time of uncertainty, with COVID-19 still hanging around, I firmly believe we need encouragement, uplifting, positivity and just good music to listen to. Not just to take away from the noise and to make us distracted from our reality and our issues and circumstances; but rather for us all to feel grateful and appreciative, just about life in general. Yes, I’m sure life right now is hard… but at least we have a roof over our heads, a bed to sleep in, food to eat, our family and friends around us, clean water and electricity. We take for granted a lot of these things that we shouldn’t; and sometimes an album comes along and reminds us of this fact. Country singer Russell Dickerson’s latest album Southern Symphony is that album- as we are met with an honest, vulnerable, heartfelt and earnest look at relationships, navigating through the ups and downs of life, and just generally persevering through adversity. I first heard of Russell and his music when he was featured on Chris Tomlin’s latest album Chris Tomlin and Friends last year for two songs (“Sing” and “Together”); and ever since then I’ve been moved and impacted by his sincerity and his determination to sing about the realness of life. Sure, his stuff is poppy and probably too ‘mainstream’ and polished to be even considered country in the first place, but Russell’s album is one to listen to and one to get us dancing and appreciating the bright side of life. It’s an album that at times is lyrically simple, and an album at on the surface we would not connect with. But there’s also something about this that is unexplainable. Call it God, the Holy Spirit, Jesus… but Russell’s album hits your heart and tugs at your emotions. There’s no two ways around it- and it really is that simple.

Opening track “Never Gets Old” is an country-fied rocker that imparts to us that ‘…some things never get old, kind of like whiskey, wine and gold, every single night having you to hold, yeah, some things never get old…’, essentially thanking God for the ‘mundane’ parts of life, and declaring that these aspects of life will never be boring, uninteresting and tedious. It’s a bold declaration, however welcome, as we remember that life need to be lived with passion and joy and a smile- if done right. If something still makes you move, makes you smile, laugh and feel something inside- that’s a good thing. And yes, we should thank God that some things do never get old. But let’s take it one step further and pray that everything never gets old!

[Home Sweet’s] one of my favorite songs that I’ve written. That song came about, when me and Casey Brown were on a run. We actually came up with the idea for “Home Sweet” the same day that we wrote “Love You Like I Used To.” That was a great day for songwriting. We were on a run, and Casey was like, “Hey, what do you think about the title “Home Sweet Us” or something like that?” And I was like, “Dude, what about Home Sweet you and me,” and get the internal rhyme there. And we were like, “Dude, yeah!” (laughs). So Casey already had a track built, and he had the chorus going. And he was playing that in the back lounge of my bus. Charles wasn’t even there yet.

Casey started playing that, and I started singing what is the chorus now, (he sings)  “Home sweet, you and me, ain’t got much but we got all we need.” And literally within 15 minutes we had the whole chorus. We were vibing on that, and then I texted Charles (Kelley): “Dude, you gotta get in here…we are on something crazy.” And so he did. I think he was sound-checking, and then he came and hopped on my bus.

Me and my wife Kailey have a bed back there on the bus. And I’m 6’-4” and Charles is 6’-6”, so we’re both on this bed scrunched up with our knees up (laughs). And with Casey Brown, we’ve got three people in this little back lounge. And man, within an hour-and-a-half, we finished that song. Once we did, we knew it was going to be special.

Current single “Home Sweet”, as expertly told by Russell in the above interview, is obviously personal, nostalgic and sentimental, as Russell reiterates in this song that he’s appreciative for this life he’s living, and that he’s grateful for ‘…home sweet, you and me, ain’t got much but we got all we need, wherever the wind blows, wherever this life goes, baby, all I know, ain’t nothing like, nothing like, home sweet…’; while radio friendly pop/country anthem “All Yours, All Night” speaks about the love Russell has for his wife, recounting vividly about physically appreciating his wife. One could say that this song is too sexual, however I reckon that this track is recorded and sung in a tasteful way, that makes us remember the fact that God’s love for each of us is infinitely more than the love we all have for our significant others. “Love you Like I Used To”, the album’s first single, is a play on words, as the first verse relays that ‘…girl I’ve always loved you, oh, but something’s changed, blame it on time, the road or the ride, but it ain’t the same…’, yet the chorus flips the message on its head from negative to positive, and speaks about a deeper love that has grown over the years; while “Forever For a Little While” has Russell again appreciating his wife, and recounts a best day with her- maybe while they were dating or on a date day in their marriage- and declares that that day felt like ‘forever for a little while’, which doesn’t mean that Russell longs for the good old days, but is thankful for those positive experiences with his wife.

“Honey”, an edgy rock song with country undertones, is probably one of the lowest points on the album, as Russell relays the same message of “All Day, All Night”, in a much more poppier and lyrically repetitive way… but maybe we can forgive him because the intent and heart is pure, as we are reminded that Russell is so secure in his relationship with his wife? The laid back and acoustic title track more than makes up for this mishap though, as Russell goes deep into his past and sings about his hometown and why he feels connected to the ‘southern symphony’, also relaying to us that his wife reminds him of home, and that’s definitely a good thing to still be connected to your roots and your family; however Russell’s duet with Florida Georgia Line (“It’s About Time”) feels super unnecessary, even though it’s musically pretty catchy. It’s not on the level of “Honey”… but it is cringeworthy- perhaps it would work better on FGL’s album?

“Come To Jesus” (no, not a Chris Rice cover!) is a lyrically clever pop tune whereby Russell contrasts just how opposite his wife his to him in personality, style and every other aspect, and then relaying that she keeps him grounded and he makes life more adventurous and exciting for her- they both fit together, and that ‘…I’m a walk on the wild side, oh, but she’s my, she’s my come to Jesus…’. Southern Symphony ends with probably one of the most personal songs on the album- “Waiting For You” describes the fact that Russell never knew love before he met his wife, and that now she means the most to him in the world- he has in fact been waiting for her his whole life. It’s a song that can sound cheesy for single people, myself included; as we anticipate the day we do meet our ‘soulmate’ the one God has prepared for us… but this song reminds us all also that we need to be treating all people as if they were our spouse- with kindness, love, empathy, understanding, loyalty, adoration, and devotion. And that way when the ‘right’ one comes along, and we just know… that’s when we can truly live free and be happy, because we know how to act and to behave, don’t we?

Man honestly…it’s been one of the best years for me. I know it’s been hard for a lot of people, and this past year was the first time we were supposed to profit from touring, and that all got canceled. But even without that, it’s been the best year to be at home. We moved into our house at the end of 2019, so we’d been in our house for two or three months when things shut down. So to be at home while my wife was pregnant, and to be at home with her and with our son, and wake up with him every morning and hang out, it’s been incredible. And so yeah, I wouldn’t trade 2020 for anything. We’ve had the time to really soak in life.

I think it’s just my individuality. Everybody has that. Not everybody uses that as their weapon. I think a lot of people get caught up in what’s cool and what’s popular. It wasn’t until I started writing songs that sound like Russell Dickerson, and Russell Dickerson only, that it started working for me.

Some people may not like Russell Dickerson and his overly sappy music that he calls country. Some people think it’s too pop, and some people think its too Hallmark-y. I for one though, reckon that though Russell isn’t that much of a country singer (because he is like a Hunter Hayes or a Thomas Rhett as he walks the fine line of pop and country!); Southern Symphony is what I reckon what the doctor ordered as we navigate these uncertain times. As we remember that Russell’s love for his wife is so strong that he sung an entire album about it- let us also remember that God’s love for us is infinite, and that He will provide us with someone who we love with our whole hearts too, if He hasn’t already. So well done Russell- I can’t wait to hear what’s next for you.. and I also can’t wait to see how 2021 pans out. Knowing God and his promises over Russell’s life… it’s going to be a pretty enjoyable year!

3 songs to listen to: Forever For a Little While, Come to Jesus, Never Get Old