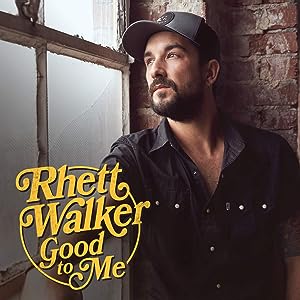 Releasing their debut Provident Label Group album Come to the River way back in 2012, and following it up in 2014 with Here To the Ones (both albums spawning hits like ‘When Mercy Found Me’, ‘All I Need’, ‘Come to the River and ‘Broken Man’, to name a few), Rhett Walker Band received success over the years, from receiving Grammy nominations and Opry performances, to delivering albums that made me reconsider what it means to create music that dovetails in between country and Christian music (and execute the music that it’ll fit in both musical ‘genres’, and fit well!). They were riding success like a wave, so in 2016, when they quietly disbanded via a Facebook post, it was a little sudden and a little shocking for me personally. Nevertheless, in February 2016, the band decided to quit the touring life, and to close a chapter on a career that was impacting, albeit too, too short. I didn’t really expect Rhett Walker to release anything else, ever…until in 2017, we saw Rhett deliver one of the most heartfelt and poignant releases of that year- ‘I Surrender’. It was a sign of things to come, because in 2018, Rhett unveiled to us a self-titled EP, as he felt rejuvenated in his call to music, navigating touring life again, this time with a clear sense of direction and hope. To come back from disbandment is a feat in and of itself, for any band/solo artist, and for Rhett to pour out his heart in the form of 6 songs was nothing short of encouraging. Now here we are in 2020, and this time Rhett gives to us a collection of 10 songs under the bundle and package of Good to Me– released digitally at the end of March; and a certain listen if you are fans of other southern country/CCM artists like needtobreathe, Third Day, Daughtry or Carrie Underwood.

Released in 2019, ‘Believer’ is the first track on Good to Me, and one of my favourite songs by Rhett Walker for quite some time. With a keyboard introduction, Rhett declares from the first note, that he ‘…walk[s] a bit different now, now that my heart’s been found, nothing really feels the same, I hold my head a bit higher, I lift my voice a bit louder, yeah, something inside has changed…’, a reminder that once we are a new creation in Christ as we commit to Him on a daily basis, we are given a new heart, and that nothing will feel the same once we realise and walk into the fullness of God’s love, understanding who He is and who we are, in light of that- ‘…I am a child of the Father, an orphan, no longer, no doubt about who I am, I’m in the hands of the Healer, the arms of the Savior, His grace makes me who I am…’. It is when we remember this and understand that this is who we are, regardless of how we feel on any given day, we can be free to live our lives, without any worry that our God will love us less or more, compared to what we do or don’t. We are believers in Christ, and how we live our lives ought to reflect that truth.

Originally released in April 2018, ‘Say Hello’ was the follow-up single after ‘I Surrender’ released in 2017, and the music styles can never be that different. While ‘I Surrender’ was a much more reflective ballad, entailing the message of how even at the end of our rope, even if and when things go south, we can still turn back and surrender to the Lord, watching Him use whatever we are going through to refine us to children of God and in essence, more well-rounded better people; ‘Say Hello’ is indeed a toe-tapping feet stomping southern rocker, as Rhett invites us to ‘…say goodbye to the worn and weary, say hello to the brand new you, hear that gospel song playing on and on, sticking to your soul like glue, say goodbye to the sin that held you, feel that love wash it all away, You can let it go and say hello, to the power of Jesus’ name…’ The song, in a nutshell, is a gospel song, and gives us a rundown on what we need to do for the power of Jesus’ love to come into our lives…nothing. Rhett delivers thought-out lyrical moments where we are challenged, and ‘Say Hello’ is no different. In the midst of the southern-rock backdrop lies a song that is carefully mined for all the lyrical goodness that it is worth, that all we in fact need to do is to lay down all our troubles at the feet of Jesus, and acknowledge Him as the Lord of our life…but even if we don’t do that, God will love us regardless, and will use whatever we experience and whatever is in our path to bring us back to Him, even if it means to shatter our preconceptions of what may be considered an ‘acceptable’ piece of offering and worship to the Lord on a daily basis!

There are 4 remaning songs on Good to Me that have been previously on his 2018 EP- ‘Like Your Father Does’, ‘Peace in the Family’, ‘Murderer’ and ‘Heavenly Home’- all giving to us unique musical backdrops across a myriad of lyrical themes relevant to the society of today. ‘Like Your Father Does’ released as a pre-release track in June 2018, close to Fathers Day (at least, Fathers’ Day in America) and speaks about the loving relationship between Rhett and his children, as he reminds them that ‘…ain’t nobody gonna love you like your father does…’ The song also becomes a double meaning, as while the melody can be taken as Rhett singing to his children in an earthly sense, the song itself is also a reminder that God Himself sings this over us, that no one loves us like our Heavenly Father, that the love our parents have for us, and that we have for our own children (or potential children down the road), is only a fraction of what God shows to us. ‘Peace in the Family’ is a revolutionary-style song, akin to songs gone before like ‘Paint the Town Red’ (Delirious?) or ‘Bonfire’ (Building 429), as we’re reminded that such an anthem as this ought to fuel us into action as we try to affect the culture of the world we live in, changing it slowly from hate to love, from fighting to peace, and from hostility to forgiveness; while ‘Heavenly Home’, standing at 3:02, showcases an acoustic style country-folk/gospel tinged melody that allows us to sing with a surrendering heart, asking the Lord to break down our own facades and to lead us to our heavenly home which is in Christ Jesus, yes in heaven after our life is done, but also, right now with Him, this side of eternity. ‘Murderer’ is the last remaining song from Rhett Walker Band EP that is present here on this full-length 10 track album, bringing us into a song that is presented in ‘Thief’-like fashion (a famous song by Third Day back in the day)- from the POV of the thief on the cross. A telling moment where Rhett unveils everything that I’m sure the person could’ve felt about himself, hanging next to Jesus, we are called to remember that if God can forgive and welcome into His kingdom, a sinner like the thief, then people like us need not worry about our own shortcomings and sins.

‘You Met Me There’ stands at a bit above 3 minutes and is track #2 on Good to Me– Rhett invites us to understand that the God of all creation meets us wherever we are in our lives, that we don’t have to do anything to move from where we are at, to where we believe God wants us to be for Him to meet with us; while ‘Good to Me’ is a declaration of praise and thankfulness that regardless of our own circumstances, God has always been good to us, in spite of what we may believe our circumstances to show and entail, at certain moments in our lives. Standing at 3:17, Rhett powerfully asserts that ‘…I will look the storm in the eye, I won’t fear for You’re on my side, my first hope, my last word, now and forever, let it rain, let it pour, I wll sing, all You’ve ever been is good to me…’, something we all need to take to heart during such a time as this. ‘Say So’, as short as it is (3:00), makes up for it with powerful delcarations as Rhett presses us from the get-go that if we’re redeemed, delivered, saved, forgiven and loved, we ought to say so- declare it from the rooftops and show it with the love that we give to people around us; while the album rounds out with ‘Mercy’, a piano driven track all about this notion and theme of mercy, and how we are in so desperate need of mercy each and every day, sometimes now more than ever.

As Rhett cries out to the Lord for his unending mercy to shower over people, we cry alongside him, longing for mercy to shower down, during this difficult time in global history as we navigate the pandemic sweeping the globe. A powerful song to be included on Good to Me, Rhett’s new album is one to enjoy and ultimately savour…but only properly if you haven’t heard of, or really listened to, his self-titled EP way back in 2018. 5 out of the 6 songs on the EP are repeated here, plus the recent hit ‘Believer’- making Good to Me only having 4 new songs. Nevertheless, Rhett’s album can still be enjoyed even if you have heard all the ‘pre-release’ songs prior- his powerful hooks and southern drawl are definite advantages for anyone looking for a little CCM/rock/country to listen to and want something different from whatever’s on the radio right now. Released on the same day as other releases from Rend Collective (Choose to Worship) and David Dunn (Perspectives); Rhett’s new album could’ve done with a couple of extra songs (howabout ‘I Surrender’ or even ‘Love Done’ from his self-titled EP), but for what it’s worth, what is given to us quality-wise is as good, if not better, than albums released previously (Here’s to the Ones and Come to the River). Well done Rhett for such a powerful album, looking forward to whatever the Lord has in store, in the upcoming weeks and months ahead!

3 songs to listen to: Believer, Good to Me, Say Hello