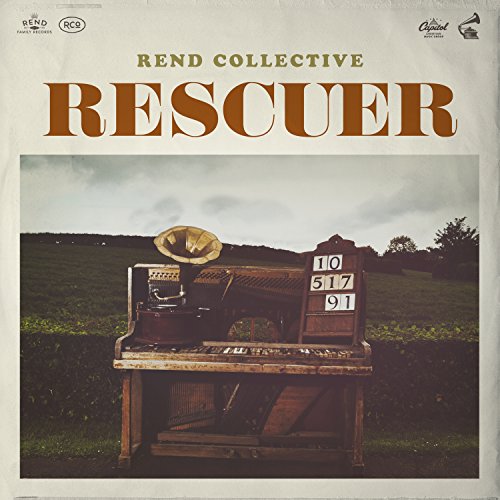 “…When we hear the word ‘revival’ it often conjures up crowded masses, sweaty arenas and men shouting things from a podium. But we can’t help but feel that while those congregational revivals certainly serve a purpose, the core of revival always starts in the quiet places of the heart. It’s a moment when everything else in life loses itself in the face of who Jesus is and what his love means for the world. We need that kind of revival every single day– to be reminded of just how good he really is…” Ever since their ambitious music video “Movements” and subsequent album Organic Family Hymnal in 2010, Northern Irish band Rend Collective Experiment (now known as Rend Collective), have given us a different perspective of worship, and breathed great new life into the British industry with their creative and quite out-of-the-box folk/acoustic albums, including slower tracks like “Second Chance”, “Alabaster”, “You Bled” together with celebratory and upbeat moments of adoration and praise such as “Praise Like Fireworks”, “Build Your Kingdom Here” and “Movements”. In 2015, the band, consisting of Gareth, Chris, Ali, Patrick and Steve, signed to Capitol CMG, in conjunction with the own label group Rend Family Records, and their latest album As Family We Go has become one of the most popular albums of their entire discography. Their inspiring hits and singles such as “You Will Never Run”, “The Joy Of The Lord”, “Every Giant Will Fall” and “One And Only” have touched and encouraged the lives of many, and it is no different in the latest single “Rescuer (Good News)”, an upbeat celebratory, joyous danceable mid-tempo guitar led melody that is sure to be a global hit in the coming months!

Released just this past week, “Rescuer (Good News)” is very welcome given the state of the world politically, as the band impart to us the knowledge that ‘…He is beauty for the blind man, riches for the poor, He is friendship for the one the world ignores, He is pasture for the weary, rest for those who strive, for the Good Lord is the way, the truth and life…’; and will no doubt have us all fervently declaring these heartfelt words in the coming days, months and even years! Driven by hand claps, stirring keys and vibrant guitars and banjos, I cannot get enough of this worship anthem, and Chris’ distinct and powerful vocals, as we remember that we can ‘…come and be chainless, come and be fearless, come to the foot of Calvary, there is redemption, for every affliction, here at the foot of Calvary…’. There seriously isn’t enough I can say about this song, but because of my own word constraints I have placed on a 1-song review, why don’t you watch the music video below, and listen to the song? Powerful, isn’t it?

“…Despite the enemy’s worst intentions, Jesus always reclaims the darkness as a canvas for his brightness. There is good news for every tribe and nation. And the true church will always be there to announce it in the darkness…” As I have listened to “Rescuer (Good News)” probably around 10 times already, each time bringing a smile to my face; it’s clear that Rend Collective bring so much lyrical and musical creativity, injecting fun, joy and life into worship. Rend Collective’s presence in a CCM industry that could be stale in worship within a few years; is definitely more than welcome in my opinion, as the band from Northern Ireland continue to impress and encourage me to worship with abandon! A standout song in 2017, this track is a must-listen for anyone wanting to worship God, but craves musical variety in an industry generally filled with sameness! Well done Chris, Gareth, Ali, and Patrick for reminding us that we can celebrate our Lord Jesus Christ every day, and soak in His loving embrace, walking in the promises He has for us!

3 songs to listen to: Rescuer, until we realise that we can also enjoy the demos/acoustic videos Rend Collective have uploaded in “Weep With Me” and “No Outsiders”, as the band ready to release their new album in 2018!