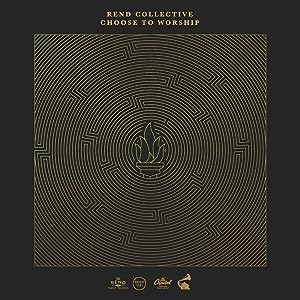 Now 2 albums into their career on Capitol CMG, and a chart-topping hit in ‘Counting Every Blessing’ from their 2018 album Good News, this Northern Irish band continue to stretch musical boundaries to be on the same musical ingenuity plane as other artists and bands- like Delirious?, Leeland, All Sons and Daughters, The City Harmonic and Crowder, to name a few. These 5 band members out of Bangor, Northern Ireland, have always been honest and earnest with their songs. And while they are currently on Capitol CMG, it was their former years at Integrity Music that solidified them as one of today’s most heartfelt worship groups, able to bring to us songs full of heart and hope, pain and suffering, yet equal moments of reverence and awe, encapsulated nicely in an Integrity Music album called ‘Mixtape’, a project that was, though redundant in every way because of Spotify, a nevertheless must-have for anyone who hasn’t heard much of Rend Collective before and want to start on a project that encapsulates the best of Rend Collective’s earlier years! Fast forward to 2020, and just released at the end of March 2020 (and on the heels of Good News-what I reckon is one of my favourite albums by the band ever); is CHOOSE TO WORSHIP, a brand-new studio album consisting of previously released singles and promotional songs ‘Your Name is Power’, ‘Revival Anthem’ and ‘Sing it From the Shackles’. An album that continues on from where Good News left off- how do we worship the Lord knowing full well of the good news that He has given to us, for all circumstances; Rend Collective continue to create a space of worship where creativity and ingenious song-writing is both celebrated with worshipful moments where songs are given space that people can respond as they meditate and soak in the emotive and challenging, and often uncomfortable lyrics; as we are hopefully called to action through these songs of praise and declaration.

Released in the middle of 2019, ‘Your Name is Power’ is the first single from the album, a song full of life, hope, enthusiasm, comfort and vitality, as we see the band divulging to us the meaning behind the song in an Instagram post from last year- ‘…we may not know exactly what you’re going through right now, what you’re celebrating, what you’re mourning, what has been keeping you up at night, or what feels like too much. But we know who the answer is to all your heart’s questions. In this season Jesus might be your Provider, your Strength or your Comforter. For us this year, his name has not only been Power, but also the one who sees our hearts when no one else does…’ It is as comfort to know that Jesus is close, never judging, and always wanting and longing for us to give whatever is on our hearts to Him, be it something we may think is shameful, or even something we believe in that moment, that He can’t handle for whatever reason. Because He can- handle our burdens. His name alone is powerful, and the beauty, I’m sure, that He can make out of our suffering and uncertainty, is more than reason enough to keep trusting during the difficult times. A song that can give us the slightest of hopes in the darkest of circumstances, Rend Collective also offer to us the acoustic version of ‘You Name is Power’, a version that’s still as vibrant and emotive, even though the music aspect of the song is next to nothing- just the vocals, a bit of keyboard and light acoustic guitar. The band continue to bring us heartfelt songs- this time ‘Revival Anthem’, another track released prior to this album unveiling. Given to us also last year in October; ‘Revival Anthem’ is a track of hope and expectation, one of longing and wanting revival to happen in the streets of where we’re at, amongst the people we come into contact with, and within and around the situations and circumstances that no one would ever think were to be possible. It is a joy to know that everywhere around the world there is a yearning and longing for a revival to come and flood the nations, maybe even more so than ever before. For revival, by definition, means to awaken something within yourself that was dormant, and understand the gravity and ramifications of what the God of the universe has done for us to be reconciled with Him forever and ever, and that it wasn’t because of who we are as people that He undertook such drastic actions, but it is who He is as God- caring and loving, wanting creation to come to Him in fellowship and knowing that it does require a price that we as mere humans cannot pay- and thus, Jesus paid it for us. Once we understand that, I mean, really, truly understand that- then revival will come and stir up a generation on fire for Jesus that we have never seen before.

‘Sing it From the Shackles’ offers to us a moment where we can sing a song from the depths of our despair and sorrow, as the song itself alludes to the time in the New Testament where Paul and Silas where indeed literally shackled and held down physically in prison- a notion and metaphor for our own lives where we often find ourselves in situations where we feel the pressures of life come to us just like literal shackles. As the band continues to delve deep into what they believe they want the song to convey, we see that ‘…as they [Paul and Silas] sang the prison doors flung open and their shackles fell off. We believe this story isn’t just an allegory or specific to them– we ALL have access to the same power of God. We all have the ability to sing in our darkest moments. We hope this song gives you an anthem for the dark nights of the soul, and encourages you to sing His praise from the shackles…’ The title track ‘I Choose to Worship’, is a reflection of our own mindset, as we need to decide whether God is worthy of worship, even in the moments of the fire, storm and flood. If he is worthy of such praise regardless, we have a choice everyday to make to consciously praise him in spite of our own trying circumstances, an understanding where the realise that our very own experiences don’t really change the way we ought to see God- as good and just as He is, giving freely of His grace to people; God wants us to choose Him over and over- regardless of what is happening all around us.

‘Day of Victory’ is a rousing anthem a la ‘Praise Like Fireworks’; a resounding energy-building track full of life and enthusiasm, as the band recount the moment in time when we have a reason to praise, to believe that we are redeemed and restored, having hope and declaring praise- from the crucifixion and resurrection onward as our lives start to reflect the biblical truth- that we’re not outsiders anymore; while ‘My Advocate’ reminds us all that God fights for us, conquering and declaring truth in the sea of lies- we don’t have to do anything to make us worthy of God’s love- only us believing that God is our advocate and defender, even if we believe we have nothing to defend in our lives. ‘Still’, prominently delivered through light electronic music and a reflective atmosphere, gives rise to the theme that we are Christians, on a daily basis, need to exercise stillness as we reflect on our relationship with Christ, casting all our cares upon Him in the process; and ‘Unconditional’, though it doesn’t really get off the ground musically (just a few light acoustics, an electronic keyboard undertone, and a few rousing string instruments towards the end of the track), still nevertheless delivers lyrically- God’s love is unconditional towards us- no matter what circumstances come our way. ‘Behold He Comes’ brings the tempo and musical tempo back to the days of 2015’s ‘You Will Never Run’, and speaks of us being in awe of the Lamb of God, and understanding that a day is coming in the future where everything else will be made right before man and God, and ‘Defiant’, a victory cry in Christ Jesus, gives us a catalyst to declare God’s love and goodness as we stand firm and defiant in our struggles, trusting that our Father will alleviate them, as we go along this journey of highs and lows, knowing full well that He’ll never let us go, no matter what we may think. The album then ends with the two songs ‘Wholehearted’ and ‘Rend the Heavens’, the former being a rousing joyous melody akin to a children’s song as this song asks for us to dance like little children as a longing of being wholeheartedly God’s comes to the fore; while the latter, ‘Rend the Heavens’, is a powerful call for God to bring the heavens down to earth in a way so people’s attention focuses on the eternal, understanding that often what is needed for people’s attention is their lives to be shaken to the core…if that’s what it takes.

Rend Collective have always been a source of worship music over the years, and hopefully, as we all listen, we can admire the band for their tenacity and their longevity in a music, dare I say, business; where artists come and go at the drop of a hat. CHOOSE TO WORSHIP is an album where we realise that worshipping, especially now during a time where we may not feel like it because of all the uncertainty and difficulty at this time- is a daily choice for us to undertake, even when we may not feel like it- especially so. The band have unveiled 13 songs of redemption and joyous praise, as this album, released on the same day as albums from Rhett Walker, David Dunn and Brooke Robertson; quickly becomes one of my favourites of 2020 thus far. Well done Rend Collective for such a powerful and poignant collection of songs, one that will be on my Spotify playlists for months to come.

5 songs to listen to: SING IT FROM THE SHACKLES, DAY OF VICTORY, REND THE HEAVENS, YOUR NAME IS POWER, I CHOOSE TO WORSHIP