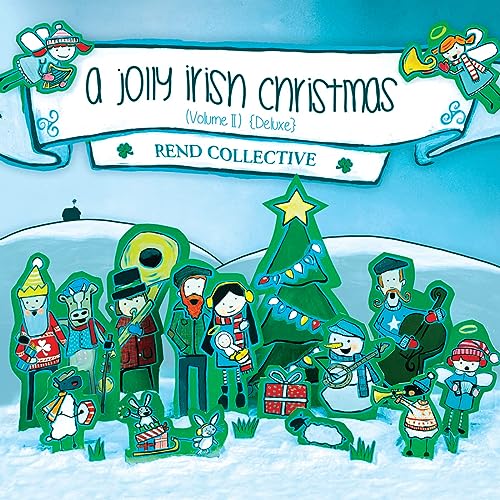 If you’ve ever frequented our website within the last few years, you would be familiar with the band Rend Collective, a Northern-Irish group that have taken radio and the CCM market by storm with the rousing and poignant anthems within the last five years, especially. Formally called ‘Rend Collective Experiment’, this band from Northern Ireland is perhaps one of the biggest groups to come out of the area ever since the British worship band (and one of the founding fathers of CCM and worship) Delirious?, and now to come from relative unknown around ten years ago, to now in 2020 becoming a go-to band to listen to if you want to hear emotive and challenging worship music, is nothing less than miraculous. Originally signed to Integrity Music before making the jump in 2015 to the more radio-friendly Capitol CMG, from the album As Family We Go onward; Rend Collective have managed to fuse together two things and do both of them well- present to us great worship music, while also pushing boundaries and creating good acoustic/folk/alternative music worthy enough of having repeat value, with their craft on a higher plane than sadly most of the modern worship music available at our fingertips at the moment. Not to discount the valid passion present in much of today’s CCM/worship community, it’s just that when a band/artist comes along that presents to us something different (and it’s a different that is great), we all ought to sit up and take notice. And Rend Collective is one such band.

Now a few years after their Capitol CMG debut, and around a year after their highly publicised and poignant album I CHOOSE TO WORSHIP, we continue to see the band stretch musical boundaries to be on the same musical ingenuity plane as other artists and bands- like Delirious?, Leeland, All Sons and Daughters, The City Harmonic and Crowder, to name a few. These 5 band members out of Bangor, Northern Ireland, have always been honest and earnest with their songs. And while they are currently on Capitol CMG, it was their former years at Integrity Music that solidified them as one of today’s most heartfelt worship groups, able to bring to us songs full of heart and hope, pain and suffering, yet equal moments of reverence and awe, encapsulated nicely in an Integrity Music album called ‘Mixtape’, a project that was, though redundant in every way because of Spotify, a nevertheless must-have for anyone who hadn’t heard much of Rend Collective before and wanted to start on a project that encapsulates the best of Rend Collective’s earlier years! Fast forward to the end of 2021, and the band have unveiled their deluxe edition version of A Jolly Irish Christmas (Vol. 2), a Christmas collection of songs that had its debut on iTunes around a year ago; but is being released again with newer renditions of songs, and an extended track listing. Delivering their Christmas songs with a Northern Irish undertone and flair, we see Chris Llewellyn and co. create Biblically-centred Christmas all re-done with an added chorus here and there, a la Chris Tomlin’s ‘Amazing Grace (My Chains Are Gone)’, also presenting to us 3 new tracks (‘Today is the Saviour’s Day’, ‘Emmanuel You’re One of Us’, ‘Indiscriminate Acts of Kindness’) to showcase one of the most jovial and jubilant Christmas albums I’ve heard this year so far. An artist that is most definitely underrated (in both CCM and mainstream), Rend Collective’s 2nd Christmas album is a definite for anyone who has appreciated and enjoyed their previous material before, or anyone who loves modern worship similar to artists like Chris Tomlin, We Are Messengers, Delirious? or even newcomers We the Kingdom.

‘…Rend Collective, Ireland’s hardest-working worship band, is back for their fourth album in two calendar years. I must say, I’ve been pleasantly surprised with Rend’s latest efforts. They’ve shown a subtle maturity, all the while brimming with their trademark joy. Their second full-length Christmas album (a rare feat), titled A Jolly Irish Christmas Vol. 2 follows suit, and isn’t all that hard to sum up. It’s a mashup of classic and original Christmas tunes done in the bands signature Irish-worship style. By now, we know what to expect from Rend, and for me, that down-to-earthness is their charm. A word about the mashups mentioned above; many advent classics are here joined to a fresh chorus, delivering lyrical relevance and audial dynamics – a la Chris Tomlin’s “Amazing Grace (My Chains Are Gone).” Though by the end of the record this formula gets predictable, it’s near impossible to disagree with this direction as it allows the band to revel in their exuberant Irish-ness, while keeping the purists from raising a stink. No song exemplifies this more than “We Three Kings (We’re Not Lost),” which begins quite traditionally before bursting into a full-on Irish-worship jig, applying the story of the magi to our day, “In the dark/we’re not lost/when it’s hard/don’t lose heart/we’re never truly lost.”
Without question, the two all-original offerings are the highlights. “Today Is The Saviour’s Day” won me over with its rowdy tavern feel, reminiscent of Billy Joel’s “Piano Man,” and a message that calls for family peace around the holidays, letting “the bygones be bygones and healing begin, today is the Saviour’s day.” While the low-key “Emmanuel You’re One Of Us” hits home, obviously referencing the trial of the current calendar year in which we find ourselves, Rend states “It’s so hard to forget about all that went on/some friends lost their jobs and some family too/some people said it was all down to You.” Seldom covered songs “Christmas In Killarney” and “Christmas Is All Around” are tailor-made for the Collective to tackle, and even if they’re done in a somewhat predictable way, the unabashed Christmas spirit is simply infectious. For musicians, Christmas music offers a unique challenge. As history’s clear frontrunner for ‘musical holiday,’ where do you draw the line between traditional and modern, and how much tweaking is too much? With Jolly…, Rend Collective has managed to walk softly between their Irish heritage, joy fuelled worship, and traditional holiday hymns. If you’re looking for a meat-and-potatoes Christmas album with an Irish flair and some new twists on yuletide favourites, snag this one…’

This above quote is taken verbatim from the JesusFreakHideout.com review of the 2020 album, and since I firmly agree with pretty much everything that JFH said, I figured it was appropriate for me to verbatim-quote this review…besides, this album is technically one year old (except for the originally written ‘Indiscriminate Acts of Kindness’, the beloved under-the-radar Christmas hymn ‘Once in Royal David City’, and the acoustic versions of ‘Christmas in Killarney’ and ‘Today is the Saviour’s Day’, alongside the funny and quirky ‘I Want a Hippopotamus for Christmas’), so I figured, that if anyone were to have been reading this review right now, then they probably would’ve read reviews of it a year ago too. Let me just say, that this album is just as good now as before. Mind you, I didn’t really listen much to Rend Collective’s Christmas album when it did release last year, but that’s neither here nor there. What I do know is this- that Northern Ireland’s underrated band that has taken CCM and worship music by storm, has created a Christmas album for us to be proud about whenever we do listen to it. The bonus 5 tracks that add onto the 12 tracks present on the band’s 2020 regular release, sincerely add to this extended album quite a bit- ‘Indiscriminate Acts of Kindness’ speaks about how we as people and followers of Christ ought to take the lead and extend acts of kindness towards people who may need it or those who even think that they don’t, especially during this Christmas season, while ‘Once In Royal David’s City’ brings to the fore, the banjo as Chris and co. capture the joy and heart of this carol that I myself haven’t really heard in years- I think the last time I heard this song was when I was in primary school…that’s how ‘overlooked’ this song has been over the years. ‘Christmas in Killarney’ was originally an Irish-American jig that has been cleverly redone by Rend Collective, crafted so that to the untrained ear, it seem like a Rend Collective original, while the band’s actual original Christmas song, ‘Today Is The Saviour’s Day’, speaks about the fire inside each of us, even though the world around us is metaphorically cold and icy because of all the developments the world has succumbed to over the last two years or so. A song that reminds us to always keep our passion for life, and our enthusiasm for Christ, alive during a time that is uncertain and difficult; the deluxe album ends with ‘I Want a Hippopotamus for Christmas’, a funny, jovial, nonsensical song about wanting grandiose things for Christmas that may be out of our price range, for whatever reason, but still wanting them because…well, it’s ok to dream and want things, especially in this climate, right? ‘I Want a Hippopotamus for Christmas’ is funny, and reminds us of our own wants during Christmastime, and maybe, we all ought to reflect on what we long for Christmas to be, for ourselves and for others, and see if what we want is actually doable or if its just lofty wishful thinking.

Rend Collective have always been a source of worship music over the years, and hopefully, as we all listen, we can admire the band for their tenacity and their longevity in a music, dare I say, business; where artists come and go at the drop of a hat. A Jolly Irish Christmas (Vol. 2) [Deluxe] is one such release where the band have excelled well with their deluxe-only tracks- dare I say that their acoustic songs are full, with much more excitement, anticipation, and hope than their original counterparts? This album is a must for now, and that worship and acknowledging the importance of Christmas, especially now during a time where we may not feel like it because of all the uncertainty and difficulty of COVID-19, is a daily choice for us to undertake, even when we may not feel like it- especially so. With the band being one of my favourites at the moment within the genres of ‘worship’; this new Christmas album from this Capitol CMG artist is not only a highlight amongst Christmas albums this year, but over the last few years as well. Well done Rend Collective for such a powerful and poignant set of Christmas melodies; one that will be on my Spotify playlists for months to come.

4 songs to listen to: Today is the Saviour’s Day, Emmanuel You’re One Of Us, Christmas is All Around, Indiscriminate Acts of Kindness

RIYL: Delirious?, Chris Tomlin, We the Kingdom, We are Messengers