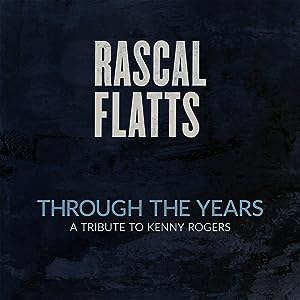 Rascal Flatts is one of the most successful country groups in all of modern music history. With hit songs like ‘Bless the Broken Road’, ‘Life is a Highway’, ‘Praying for Daylight’, ‘Why’, ‘Unstoppable’, ‘The Day Before You’, ‘My Wish’, ‘Changed’ and ‘I Won’t Let Go’, to name a few; Gary LeVox, Jon Don Rooney and Jay DeMarcus have presented to us a highly publicised and prolific career in music thus far, and even though there was an announcement this year of their disbanding, this trio has made a lasting mark on not only country music but on music in general, that I reckon few other bands have. They are influential enough that I even wrote a blog about them last year, and upon hearing these songs throughout the last year or so, I can safely say that my aversion to country music all this time, is slowly fading away. Now in 2020, a few months after their announcement of moving separate ways, we see another recording releasing from them, this time a cover song as a tribute to the recent passed-on country star Kenny Rogers, ‘Through the Years’.

While the song itself was a commemoration and honouring of the late-great Kenny Rogers’, the song itself has meant a lot more to the band than I’m sure even we realise. The song itself wasn’t a high-charting song by Kenny, by any means. Rather, this song is full of a lot of sentiment and poignancy, as Rascal Flatts deliver a soulful performance, as this song about honouring someone through the years of their craft, can be as applicable to the honouring of Kenny Rogers, as well as one that honours Rascal Flatts too. Jay, Gary and Don have crafted a career that I’m sure artists dream of- and this country/spiritual band have impacted a lot of artists than we may even realise- Hunter Hayes and Dan + Shay, to name two that have been influenced by Rascal Flatts and their music. The song itself- about love and commitment through the years- either talking about someone’s spouse, or friends or family, people in their life that they know they can’t live without. The song is also honouring to the fans of Rascal Flatts too, thanking them for their years of fandom and service as the albums released year upon year upon year. ‘Through the Years’ challenges us all to find a love that is lasting as the years roll on, and understand that in this time of isolation and self-quarantine, our relationships with others need to take more of a front-seat than just about anything else- for it is when we are in community that our mental health can be stronger at this time. ‘Through The Years’ is a perfect song for this era where we are in right now, as we contemplate and reflect upon the people in our lives that we are thankful for. Though I have never heard of Kenny’s version of ‘Through the Years’, I still can say that this rendition will make Kenny and the rest of country music proud, as such a song is fitting, for such a time as this. Well done Jay, Don and Gary for such a poignant track, here’s hoping people will continue to be impacted by the legacy of the band when they hear this music, as the months and years continue to progress ahead.