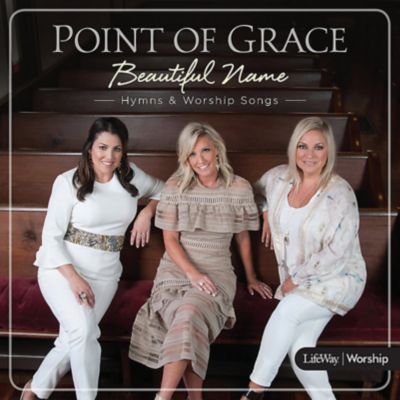 Point of Grace is no stranger to success. A household name in CCM music, the all-female vocal group formed in the mid 1990’s and have since delivered powerful and heartfelt melodies and wowed us more times than we can imagine. Their stirring radio singles and poignant, reflective ballads have touched the lives of many, with songs such as “How You Live”, “Steady On”, “Gather At The River”, “Keep The Candle Burning”, “Blue Skies”, “You Will Never Walk Alone”, “Day By Day” and “I Choose You” each earning a place in our hearts as we hear such honesty and utter devotion to Jesus Christ. Though Leigh Cappillino, Denise Jones and Shelley Breen last released new material in A Thousand Little Things way back in 2012, as well as a covers album Directions Home three years later, plus their 5th Christmas project last year, you may be forgiven to think that the three vocalists are only releasing ‘special event’ projects now. And while that may be true in this current season, and especially true since Point Of Grace’s latest project Beautiful Name: Hymns And Worship Songs contains their versions of well known hymns and popular modern worship songs, there is an original melody present on this track list to whet our appetites for when Point of Grace do record a full length album of all-original material, which I’d guess would be later on this year or early next year. Though Beautiful Name: Hymns And Worship Songs is a release to tie us over until the group decide to release all new original material, that doesn’t mean that this hymns/worship album is inferior; in fact I’d go as far to say that it’s a unique project and one of my favourite worship albums of 2018 thus far. So let’s sit back, and sing along with the ladies of POG, as we celebrate Jesus and worship Him, especially as we reflect upon Easter just passed.

A glance down the track list and we see quite a few hymns re-done, and from numerous listens, let me tell you that Leigh, Denise and Shelley have recorded these anthems to perfection. Lesser known hymn “All Hail The Power Of Jesus Name” is the album opener and is a great way to start proceedings, with this inspiring acoustic guitar led worshipful melody essentially praising God and giving credit to the power of His name, while an even lesser known hymn “He Leadeth Me” follows, which contains heaps of old English, tongue twisters and a 90’s ballad atmosphere. Yet further down the tracklist we see familiar melodies such as versions of “Holy, Holy, Holy” (which is turned to a country/southern gospel/laid back worship melody led by pulsating drums, twangy electric guitars and an engaging banjo riff) and “Praise To The Lord The Almighty” (previously recorded by Passion in 2004, and this time a mid-tempo inspiring worship melody that doesn’t even feel like a hymn at all!), where the ladies of POG wow us with their honest, emotional, personal and heartfelt interpretations, making these songs their own.

Both “Blessed Assurance” and “In Christ Alone” are a couple of my favourite hymns ever, as lyrically the former speaks about how we can be assured in Christ and in our faith because of the promises Jesus has made for us, and the latter, a modern hymn written in 2000 by Stuart Townend, Keith and Kristyn Getty, delves into the notion that our hope is found only in Christ and Christ alone, and is a song covered by many artists, inclusive of Natalie Grant, Newsboys, Avalon, Passion, Newsong, MercyMe, Phillips Craig & Dean and Owl City. These two songs are hymns that I would only pick, if I were to pick only two hymns to adequately sum up the message of the gospel and the good news. So I guess that it’s fitting and appropriate that Point Of Grace cover these hymns as 9th and 10th on the album, and record with minimal instruments- so as to not detract from the powerful and timeless message of Jesus’ love for us and what the cross and resurrection means for us as Christians. A well-recorded version of both songs, “Blessed Assurance” and “In Christ Alone” are probably set to be sung more and more in the coming years, and though it might have been scary to record these two and live up to the hype, Point Of Grace can be proud of their efforts.

Point Of Grace also cover “What A Beautiful Name” and “Cornerstone” also, both from Hillsong Worship, and we are glimpsed to see a couple of songs of this generation, which will still be sung in the many years to come, recorded in such a beautiful, professional, honest, personal, emotive, haunting and mysterious way, as the message of the original anthems are still maintained, yet these versions sound still like Point Of Grace as well. With the former being a smash hit single from Hillsong Worship from late 2016, and recently having won a Grammy this year for the best contemporary Christian song, and the latter melody being a smash hit from the same band in 2012; Point Of Grace have carefully chosen these two melodies, as two songs that could possibly be elevated to hymn status in the coming years.

Or maybe these songs are classified under the ‘worship songs’ part of the ‘hymns and worship songs’ subtitle of the title of the album… either way we are blessed, and we are also blessed to hear the trio’s piano only rendition of Twila Paris’ smash hit “How Beautiful”. I haven’t had the pleasure of hearing the original melody (quite frankly Twila’s music isn’t my cup of tea!) however Point of Grace’s rendition is more than worthy to be included on this album, as we dwell upon how great and beautiful Jesus is, and why that means He deserves all the worship and praise. The final song present, is the originally penned and recorded “The Power Of Love”, and is such a joy to listen to, as we are blessed to hear Denise, Shelley and Leigh record a winner, a piano led ballad with a 90’s atmosphere, that has the power to be a hymn in the future also. A song that proves that Point Of Grace’s best days’ aren’t behind them, this powerhouse anthemic and epic ballad showcases the vocals of each of the three members, as we remember that the power of love, the power of Jesus, is evident in everything on this Earth, in creation, in the small things and the big things, if we just keep our eyes open to the wonder and beauty of all around us. Well done guys for a stirring melody that hopefully marks the start if a new chapter for you, as you settle into what God has planned for your life next.

With an amazing repertoire of songs already recorded, Point Of Grace have recorded an exemplary album in Beautiful Name: Hymns And Worship Songs– an album to be savoured, and listened to again and again as we dwell upon Jesus and His unconditional love for each one of us. Shelley, Leigh and Denise have sung their hearts out, and made their versions of famous hymns and worship covers their own. Having me very excited for the next full length all original album (in 2018 or 2019 maybe?), you will not be disappointed when you listen to this project, even though it only contains 1 original song. Well done ladies, for a sublime effort, and I hope many people are blessed by your efforts!

3 songs to listen to:  The Power Of Love, Cornerstone, Blessed Assurance