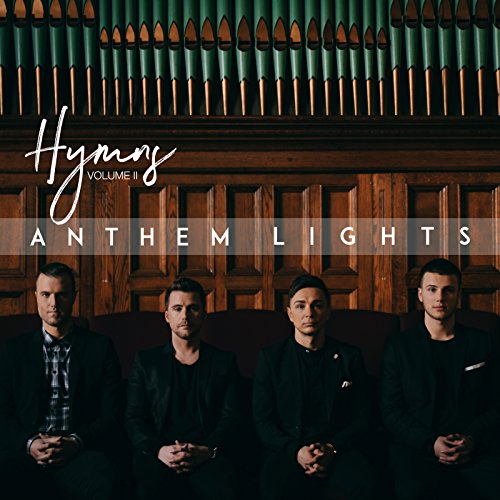 If I was to say the name ‘Anthem Lights’, probably one of the first things that come into your head are the various covers or medleys these guys do, of mainstream songs, or even the individual member’s side solo careers as well. However, behind the slick vocals and stellar harmonisation from Spencer Kane, Joey Stamper, Chad Graham and Caleb Grimm, are four men who are passionate for Jesus, and it shows in their original material. Painted Skies, Escape, You Have My Heart and their self titled debut shows us that their ministry in the mainstream is not done, as well as their ministry for their Christian brothers and sisters.

Just take a look at the band’s discography. Anthem Lights unveiled their self-titled debut album in 2011, an acoustic EP in 2012, 2 more studio albums in 2014, plenty of cover EP’s and albums, as well as plenty of member changes, culminating in their most recent album Painted Skies in 2017. In-between though, Anthem Lights proudly presented to us…wait for it! Yep, a 10 song hymns album, titled Hymns (how original!), comprising of 5 medleys (what they do best!) and plenty of inspiring harmonisation and catchy hymn renditions to immerse us in the worshipful spirit. So, what do you do when you release a successful hymns album, standing at 27 and a half minutes, which is far too short? Well, you release Hymns Volume II of course! This time for a duration of a mere minute longer! Yep, Hymns II which dropped a few weeks ago is also under 30 minutes in duration. Though impacting and challenging, this release will impact those who listen, although it is still a mixed bag

One listen to Hymns II reminds us all how these guys are still on fire for Jesus, and we can indeed be encouraged by the band to worship the Lord Almighty. As I mentioned in the previous review that hymns are timeless and have been recorded plenty of times throughout the years, artists’ renditions of traditional hymns can be hit and miss sometimes- with a hymn either staying close to the original, or completely altered beyond recognition. The outcome being powerful, gripping, haunting and compelling, or distracting and less than memorable, and we can see both outcomes on Anthem Light’s new project.

Unfortunately, the tracks I would say to avoid are the medley tracks. Yep, 4 out of the 10 tracks are nonetheless heartfelt and emotive, but because of the different tempos of these songs, and the fact that each medley is around 3 minutes, and each medley has 3 or 4 ‘songs’, there really isn’t any room for error, which sadly there is here. The medleys are sung to perfection and each ‘song’ in the medley is near-flawless. But it is the ‘transition’ between song A to song B to song C within each medley (then sometimes back to song A!) that irks me. I know it’s not intentional, but maybe choosing songs based on subject matter isn’t the way to go, and instead choose songs based on similar tempo?

“The Invitational Medley”, “The Blood Medley”, “The Cross Medley” and “The Crown Medley” are all the offerings here that included multiple songs per medley, with “The Blood Medley” working the most and having the greatest number of seamless transitions, while the other three medleys have stronger ‘song snippets’ but do not work that well when sung together as a whole. Particularly in “The Cross Medley”- both “Jesus Paid It All” and “The Old Rugged Cross” are timeless hymns; I reckon a medley doesn’t really do these classics justice, don’t you? On the bright side though, the piano and acoustic guitars that lead these medleys are played to perfection, and each of the four vocalists work extremely well in harmony together.

Out of the six remaining melodies that are single song offerings, I’d say that there isn’t really a bad song of the bunch, and that is what saves this album from total embarrassment. The acapella 2 minute opener “Holy, Holy, Holy” is very short, and is sung in a quick tempo, but the four vocalists otherwise sing in beautiful harmony, as they ardently reiterate that Jesus is ‘…Lord God Almighty! All thy works shall praise thy name in earth and sky and sea; holy holy, holy, merciful and mighty, God in three persons, blessed Trinity…’, while lesser known hymn “All Creatures Of Our God And King”, led by the captivating piano, is a welcome surprise, as we worship alongside the band, and proclaim Jesus to be King above every living creature and everything else on the planet. “Great Is Thy Faithfulness” and “My Jesus I Love Thee” are both present here also, and sung to perfection, as these tracks aren’t ‘beefed up’ or given a bit more of a modern interpretation, or given more instruments to make it sound more current- but rather it’s just the vocalists and the piano, giving them a greater opportunity to shine vocally and the listener time to listen to the message of these songs. Yet it is “How Great Thou Art” and “10 000 Reasons” that impact me the most on Hymns II, with the former being my most favourite hymn of all time (a track just led by the keys, and the most reflective and contemplative on the album!); and the latter being one of my favourite Matt Redman songs ever (alongside “Blessed Be Your Name”!). Though this track isn’t a hymn per se, I reckon it will be a modern hymn, as Anthem Lights do this song justice and then some, with Spencer, Joey, Chad and Caleb capturing the essence of this worship anthem perfectly, that we can worship Jesus’ name because of 10 000 reasons and more!

Anthem Lights’ Hymns II is a solid entry into what is a varied, colourful and interesting career thus far. Despite the album’s shortcomings (the disconnectedness of quite a few medleys), the positives here more than outweighs the negatives, namely with Anthem Lights able to reawaken in us the notion of worshipping Jesus through the simple yet effective hymns (see “10 000 Reasons” and “How Great Thou Art” especially!). With their faith keeping them grounded, I am certain that this band will be within the CCM/pop industry for many, many years to come. Well done Anthem Lights for such a captivating, cheerful and worshipful album, that I’m sure will provide us with moments of reflection, especially since Easter just ended this year! What will the band conjure up next? Another covers album or another Christmas album? Or a surprise studio album this year? Bring it on, whatever it is!