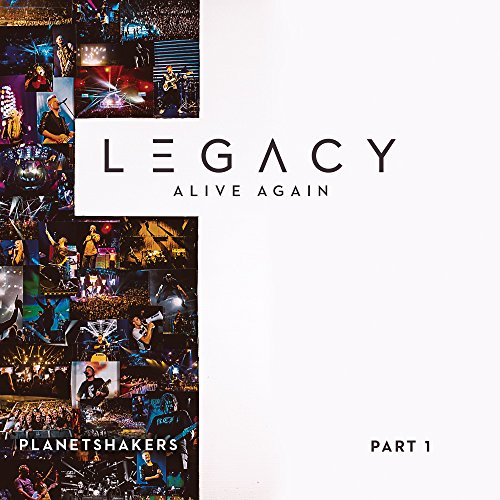 With so much hype over the years about Hillsong, and how this little youth group once upon a time back in the day is now a global phenomenon spanning over the world under the umbrellas of Hillsong Worship, UNITED and Young & Free, one can forget that around a similar time of Hillsong’s dominance during the 2000s, another Australian worship movement was starting to grow- Melbourne based group Planetshakers. One of the most popular, creative, unique, passionate and inventive worship movement geared towards young people (aside from the ever reliable Passion Worship movement that release annual albums based off of their conferences in January of a certain particular year), Planetshakers have such a repertoire of studio and live albums over the years. And although I haven’t really been as immersed in their discography over the years as I reckon I could’ve been, there have been songs throughout the years that have stood out for me, namely tracks from Rain Down and All That I Want back in the day, as well as more recent songs like “Nothing Is Impossible” and “I Know Who You Are”. As a whole; Planetshakers have released some great albums, and some albums of less than stellar cohesion. While this Victorian worship movement hasn’t really been as popular as their Sydney counterparts (Hillsong and all its varieties), the band does have its place in worship music, even though I reckon, from an objective standpoint, it feels like the worship genre itself seems a little too saturated. Nevertheless, Planetshakers and their influence spread far and wide, which brings me to this question- with a new EP titled Legacy Pt. 1: Alive Again released just a week ago, do Planetshakers really need to release a new project, considering the success of Overflow only in September 2016? Granted, Planetshakers do release albums every year, and at least one song stands out for me on each Planetshakers project, even if the song is for bad/good reasons. So what about this new offering? Does the band deliver another hit in a similar vein to “I Know Who You Are”?

With 4 tracks and two videos encompassing this new EP, Planetshakers have given us something great, unique, powerful and encouraging…only if you want something new to sing at your church. Don’t get me wrong- these songs aren’t terrible. They’re good in their own right. I can easily listen to these songs on a summer day and become energised and jazzed up for Jesus. The production of the music is next to perfect as lead singer Joth Hunt and the band give us new songs to sing both with a congregation and individually. Stylistically this new EP is a little bit of a turnaround compared to albums and EP’s past- 50% (2 songs) of the EP are upbeat- compared to the vast majority of the albums previously being ballads/anthems. That’s no biggie- in fact I enjoy Planetshakers and their upbeat music much more than their slower songs.

Nevertheless, these 4 songs are enjoyable and their lyrics relatable and easy to sing and remember…until the next worship album from the next worship group releases. While I know the band has very good intentions with the EP, sad to say- when I finish the 4 tracks, I can’t really remember the lyrics of any of them. Now that is saying something. When a song like “Because of Your Love” (Chris Quilala), “You Redeem” (Aaron Shust), “The Cause of Christ” (Kari Jobe), even songs from yesteryear like “Above All” (Paul Baloche), “Here I Am To Worship” (Tim Hughes) and “Blessed Be Your Name” (Matt Redman), I can remember every single lyric line and word.

Maybe it’s because Planetshakers use a lot of repetition, maybe the songs just drag on, or maybe they themselves decided to change and not follow their ‘radio format’ that made “I Know Who You Are” popular, whatever the case, this EP, while good intentioned and musically unique, seems to fall flat, with regards to whether or not I will go out of my way to listen to this EP again…which I probably won’t. Needless to say; someone will be blessed by this album, but it probably won’t be me. Then again, maybe I was just turned off by the videos of “Alive Again” and “Drawing Closer”- it seemed to me more like a concert rather than a worship service. With flashing lights and more emphasis into choreography more than anything, I started to wonder…did the band, in these videos, seemed to be really worshipping, or were they dancing and moving like that to serve their own egos? I know, a harsh thought, but you do wonder, with a lot of bands, particularly worship ones, popping out of the woodwork. Still, this EP will bless someone, and maybe I will change my rating of the EP in a little while, when God realigns my heart with regards to this issue of worship songs being more cliché than what they should be if they want to express worship as well as an artistic endeavour. Planetshakers has revolutionised the worship music industry alongside Hillsong, here’s hoping this EP is just one small mishap in the grand scheme of a well-earned career full of radio hits and encouraging melodies!

Overall an EP that has continued my reinvigorated interest for Planetshakers a bit more, even though this EP itself didn’t really find its feet; Legacy Pt 1: Alive Again has created momentum as I anticipate further ‘part’s to release later on during 2017. Still not as impacting or rousing as albums from Passion, Jesus Culture, and Hillsong, Planetshakers holistically have done Australia proud with their latest live EP (4 songs and 2 videos)- full of inspiring messages and uplifting lyrics about Jesus! While lyrically cliché at times, their energy on stage in the videos makes up for the overused and somewhat corny lyrics. Nevertheless, this EP is perfect for anyone who loves the worship music genre. However, if you want something that is worshipful, but stretches the boundaries when it comes to artistic ingenuity and quality, then this EP may not necessarily be for you- check out The Garden (Kari Jobe), Red Sea Road (Ellie Holcomb) or Poets and Saints (All Sons and Daughters) instead!