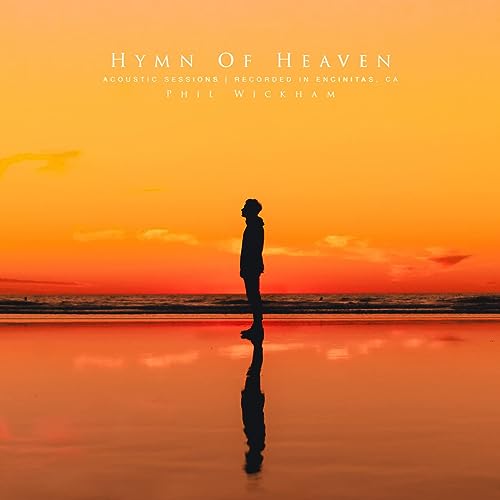 Phil Wickham has always been one of my favourite worship artists, over the past decade or so. Since 2003 when he unveiled his debut album Give You the World, Phil has given to us powerful singles after powerful singles- ‘Grace’, ‘Divine Romance’, ‘After Your Heart’, ‘Safe’, ‘I’ll Always Love You’, ‘At Your Name’, ‘This is Amazing Grace’, ‘Glory’, ‘Living Hope’, ‘My All In All’, ‘Your Love Awakens Me’ and ‘Till I Found You’, to name a few. In a general sense, Phil has always had a knack at giving to us, great albums, period. From albums like his most recent, 2021’s Hymn of Heaven, to the album that got me into the fandom, Response, as well as his chart-topping The Ascension and 2018’s Living Hope, Phil’s powerful and distinct voice cuts through all the cookie-cutter CCM that seems to seep through; and brings it home to be a reminder that great music artists still exist within the realms of CCM. But for me, as a cut above the rest, has always been Phil’s singalong volumes. As we look back at his career just for a second, we ave the acoustic albums Singalong 1 (acoustic versions of songs from albums Phil Wickham and Cannons), Singalong 2 (acoustic versions of songs from albums Heaven and Earth and Response) and Singalong 3 (acoustic versions of songs from album The Ascension), alongside Children of God: Acoustic Sessions and his follow-up acoustic album, Singalong 4 (acoustic versions of songs from his album Living Hope). In each of these volumes, it’s just Phil, the acoustic guitar and these songs, making the experience much more intimate and compelling. For as long as I remember, hearing these renditions on all the Singalong albums, as well as the 2016 acoustic Children of God album, makes me enjoy the original songs all the more. This further proves the fact of Phil’s ability to take a song and strip it down to just acoustics, creating a space for the Lord to move and speak, thus making much of his songs and his discography more impactful and encouraging because of these acoustic renditions.

Quite possibly one of my favourite worship artists of all time, alongside others like Meredith Andrews, Paul Baloche, Christy Nockels, Tim Hughes and Chris Tomlin; Phil Wickham has continued to impress with every album that releases, and as the years go by, we see a sound that has been refined and matured as Phil delivers songs that are as poignant as they are seemingly out-of-the-box musically and hence, in some ways, underappreciated in the scope and realm of worship music as a whole. While artists like Chris Tomlin, Hillsong (all its facets), Jesus Culture and Bethel Music are the most popular at the moment; it is nice for Phil to come along and inject some kind of life and vitality into the worship music genre. Not that the worship music genre is a bit of a drag, yet sometimes, it needs someone to come to present to us a new kind of how worship music can be portrayed…and Phil Wickham has done just that throughout his career. In 2021, Phil came along and released Hymn of Heaven, an album that bore the hits ‘House of the Lord’, ‘Battle Belongs’, ‘It’s Always Been You’ and more recently ‘1000 Names’ (that was recently recorded again by Sean Curran (one of the writers of said song). Now a full year later from one of the most cohesive and powerful studio album releases from Phil, we see another Children of God treatment- like how in 2016 when Phil recreated an acoustic version of his 2016 album verbatim, so too has he done so, with Hymn of Heaven– his new album that dropped last week is none other than Hymn of Heaven: The Acoustic Sessions.

I’ve written a review about Hymn of Heaven on the website before, and it can be seen here, thus I don’t necessarily need to rehash anything for this ‘review’. But what I will say is this- that everything I wrote about the studio album last year, I stand 100% behind this album as well. Hymn of Heaven, in both studio and acoustic form, is a great album, period. My favourite album that released last year. And an album that has tremendous replay value, that’s for sure. Over the last 18 years (his first studio album Give Me The World was an independent one made in 2003), Phil continues to present poignant songs of praise and perseverance as this new set of songs- the songs on Hymn of Heaven (and by extrapolation, Hymn of Heaven: The Acoustic Sessions) are some of the most emotive and energetic I’ve ever heard Phil perform in his whole career. ‘Battle Belongs’ is a powerful anthem, while the acoustic version of ‘Reason I Sing’ accentuates and highlights Phil’s powerful lyrics in the track, making it one of the standouts on this acoustic record. I’ve had a newfound love for ‘1000 Names’ (because of Sean Curran’s version) and this acoustic rendition has reminded me why I’ve so much adored Phil’s version to begin with; while songs like ‘It’s Always Been You’, ‘God of Revival’, ‘Where I’m Standing Now’ and ‘His Name is Jesus’ all translate and transition quite nicely to an acoustic setting where the heartfelt meaning of said songs become so much more impactful for the listener, myself included.

And with that, I’m gonna listen to Phil’s new album (both acoustic and studio versions) again and again, because this album is for anyone who loves music in general, who loves worship that isn’t the ‘run-of-the-mill’ like Chris Tomlin (sorry, Chris), but rather, something unique, fresh, emotive, powerful and heartfelt, all of which is shown very much throughout Hymn of Heaven and much of Phil’s songs of the past. Well done Phil for both Hymn of Heaven and Hymn of Heaven: The Acoustic Sessions; projects that stand tall amongst many of the worship album releases of 2021/2022 so far. This is a perfect album for anyone who has enjoyed much of Phil’s music catalogue previously, or those who love and appreciate worship-style music with more of a creative edge. Can’t wait for people to be encouraged and impacted by such an album (acoustic or studio) in the upcoming weeks and months ahead!