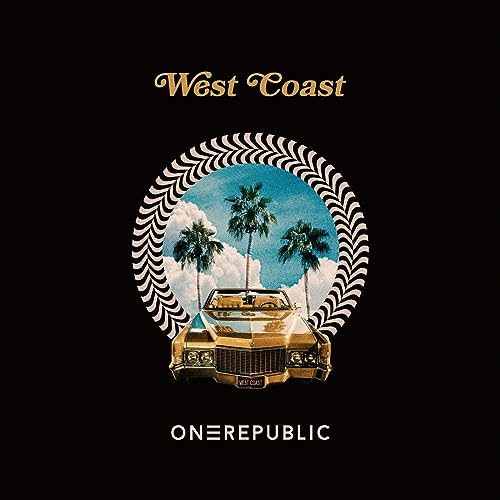 Around about 6 months ago at the end of August, I reviewed the long-awaited album from pop band OneRepublic, called Human. Comprising of 8 songs we’ve heard before (through various stand-alone singles released throughout the period of 2018-2021) and 8 brand new songs, Human as a whole was a compelling, emotional, honest, vulnerable and inspiring album and one of my favourites of 2021. I won’t dive deep into OneRepublic here, because you can read about them on Wikipedia or on my review of Human or on Jon’s blog about them from a couple of years ago. But what I will say is that Ryan Tedder and co. are back for their brand-new single “West Coast”. A song that is the lead single from their next studio album due out in June 2022, tentatively titled Never Ending Summer; OneRepublic isn’t slowing down. A track that is just as poppy as it is catchy, and a melody that speaks about celebrating the positive and optimistic things in life; Ryan and his friends have delivered to us a melody that will be on our playlists for the next few months and maybe years.

Having already released hits like “Apologise”, “Good Life”, “Secrets”, “Counting Stars”, “Love Runs Out”, “Kids”, “I Lived”, “Come Home”, and “Stop And Stare”, as well as recent hits “Rescue Me”, “Wanted”, “Run”, “Better Days” and “Lose Somebody”; one could think that OneRepublic deserve a bit of a break. Not so. With the release of “West Coast”, we have that summery, breezy, pop atmosphere- a likeable song that speaks about being wild and free, and also speaks about having a good time. It’s a melody that isn’t that deep and introspective, but in relation to the ongoing pandemic, it’s nice to have a song that makes us forget our troubles, if not for a little bit. “West Coast” is a melody with a lot of heart, soul, inspiration, and purpose. It’s a song to turn up in the summer, and to also dwell upon when you’re feeling low. It’s a song for all seasons, and that’s the beauty of any OneRepublic song. They’re hard to hate, and the same goes for “West Coast”. It’s a pop banger that shows us the band’s identity front and centre, with the message and hope is still there. With the melody being a pick-me-up tune about living life to the fullest and soaking up the sunshine in the west coast of America, as well as being thankful for this life (a similar theme to the guys’ latest single “Sunshine”!); we are met with a song that is carefree but a song that inspires us to be grateful for the air we’re breathing and the heartbeat in our chests.

In this very moment with so much uncertainty with Omicron; I’d have to say that the future is unknown in all facets- economically, emotionally, relationally… but with albums like Human to listen to, hope is still alive in the hearts of all of us, as we hang onto our humanity and our strength. While I myself are of the opinion that right now we need more and more new music to get us through, I for one agree somewhat with what Ryan Tedder mentioned in 2020, in that releasing new music while a pandemic is going on seems a bit insensitive. Yet every artist is different- and at least there is still uplifting music around if you only know where to look. We all may not have understood why OneRepublic kept delaying Human; but as long as we can be reminded to cherish the ones you love and to chase after your dreams and whatever else is in your heart, then I am certain that we will see the light at the end of the tunnel in the coming months and years! With the next OneRepublic album being released this year (a quick turnaround from Human!); there’s still life in these guys yet… and can we say that “West Coast” marks a new chapter for these guys, and maybe signify a new lease of life for the band? Well done guys, for one of your most poppy yet hopeful songs this year! And I can’t wait to hear whatever comes next!