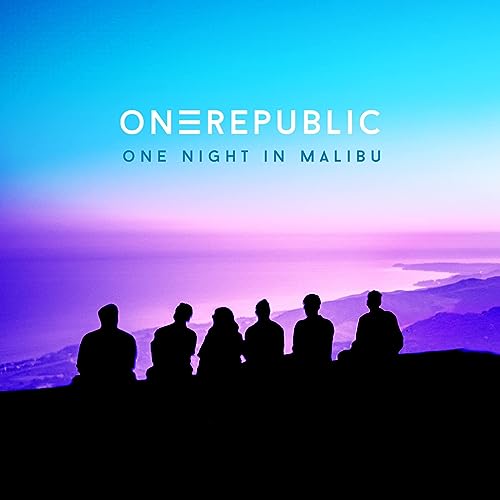 The other month I reviewed the long-awaited album from pop band OneRepublic, called Human. Comprising of 8 songs we’ve heard before (through various stand-alone singles released throughout the period of 2018-2021) and 8 brand new songs, Human as a whole was a compelling, emotional, honest, vulnerable and inspiring album and one of my favourites of 2021. I won’t dive deep into OneRepublic here, because you can read about them on Wikipedia or on my review of Human or on Jon’s blog about them from a couple of years ago. But what I will say is that Ryan Tedder and co. are back for their brand new live album One Night In Malibu. An album promising of 17 tracks, of which most of these are live versions of songs from Human; we are met with a project that we all so desperately need, considering how right now concerts are limited due to Omicron.

My level of respect for Ryan and his band mates increased instantly by an exponential factor once I listened to and reviewed Human. My respect also further increased as I watched snippets of the band’s exclusive ‘One Night in Malibu’ digital performance on YouTube. At the time (which was around late last year), the performance was randomly uploaded to YouTube. As you can now see through the link… the performance is now taken down due to a copyright claim; and now reuploaded here under OneRepublic’s official YouTube channel. Yet now matter if the video performances are chopped up into separate videos; the end result is the same. It’s some of the most inspiring, moving, poignant, vulnerable and honest music I’ve heard in a while; and Ryan and his friends need to be extremely proud of themselves. The production on the concert is top notch as well!

As far as the songs go… well if you’ve read this far about a review of a live album, then chances are you’re a OneRepublic fan, aren’t you? Do I really need to dive deep into these songs at an extensive level? We can end this ‘review’ right here, can’t we? However, I guess for those who haven’t read my review of Human, I’ll briefly touch upon these powerful and compelling melodies for a bit! By and large, these live versions of already-heard classics and new fan favourites sound eerily similar to the studio versions. But that ‘nitpick’ is neither here nor there- because One Night In Malibu is still crazily awesome no matter which way you slice it.

Written in quarantine, the short but sweet and impactful 2-and-a-half-minute acoustic type track of “Better Days”, is as honest and emotional and hopeful as you can be in a situation like this, as lead singer Ryan Tedder attempts to bring us comfort and joyous optimism in this time of the world being upside down! “Better Days” was one of the most thought-provoking tracks of the year of 2020 (the year the song was released!), as well as one of the most hard-hitting and impacting OneRepublic songs ever- alongside songs like “Apologise”, “Counting Stars”, “Stop and Stare”, “Good Life”, and “Love Runs Out” to name a few. As Ryan fervently relays across pulsating keys that ‘…oh, I know that there’ll be better days, oh, that sunshine ’bout to come my way, may we never ever shed another tear for today, ’cause oh, I know that there’ll be better days…’; we are reassured that ‘these days’ will end sometime. That may not be now, or next week or even next month. COVID-19 is a tricky thing to navigate, and this song allows us to believe in the possibility that better days will be coming. And we’ve got to believe that; we’ve got to have hope to keep on going throughout the day. Speaking of the aforementioned hit songs from OneRepublic ever- namely “Apologise”, “Counting Stars”, “Stop and Stare”, “Good Life”, and “Love Runs Out”; all of these songs (except for “Stop And Stare”- don’t know why though!) are included as live versions here- with each rendition sounding exquisitely brilliant and powerfully epic in the best ways possible. “Apologise” speaks about two people having a falling out in a friendship or a relationship, with one person saying to the other that it’s too late to apologise; and it’s also a melody that is a warning to us all, that we all should cultivate our relationships and friendships before they turn into the situation in this song! While “Counting Stars” is a happy-go-lucky pop song basically about being famous and feeling alive once you’ve made it, whilst still possessing the morals you’ve had since the beginning- that you’re not counting dollars, but counting stars (aka thanking and praising God) for your successes. “Good Life” is another pop song of gratitude that is extremely poppy and catchy; while the rather reflective and introspective pop tune “Love Runs Out” speaks about being faithful and reliable in whatever situation (to your friends, your family, your kids, your spouse) ‘until the love runs out’- which is code for being faithful, loyal and reliable always- never ending and unceasing.

One of my favourite OneRepublic songs is the underrated “Secrets”, whereby Ryan sings about the concept of being real and vulnerable and about wanting someone to share your entire soul and all your secrets with. On this live version, Ryan and co. makes this rendition all-the-more raw and intimate with the cello in the forefront; while “I Lived” is a powerful and honest melody of gratitude and thankfulness, and about taking risks and really living instead of passively breathing through life- it’s a word of encouragement and hopefully a song we can proclaim, that ‘…I did it all, I owned every second that this world could give, I saw so many places, the things that I did, yeah, with every broken bone, I swear I lived…’. “Run”, a promotional single from Human, is an extremely uplifting song that is probably the band’s most inspiring in a while. Driven by pulsating guitars and synth, Ryan and co. earnestly and powerfully relay to us that though there might be hard times and adversity ahead of us, we ought to count our blessings and be thankful for what we’ve been given from the ‘good Lord’. A song full of gratitude and appreciation, the track invokes within us a sense of pride and a sense of happiness- learning to look at the brighter side of life in a ‘glass-half-full’ kind of way. And as Ryan passionately relays to us that ‘…one day well the sky might fall, yeah, one day I could lose it all, so I run until I hit that wall, If I learned one lesson, count your blessings, look to the rising sun and run, run, run…’; we are inspired and encouraged to chase our dreams as far as we can- because we never know what tomorrow holds. “Wanted”, another single from Human, is another song that is honest, vulnerable, and relevant for today’s society, as the synths and electronics-led melody speaks about each of our innate needs and desires to be loved, wanted, desired and appreciated as humans, with Ryan eloquently crying out that ‘…I just want to be wanted, oh, I could use a little love sometimes, I just need to be needed, oh, like to know I’m crossin’ someone’s mind, I just want to be someone that somebody needs, I just want to be more than a drop in the sea…’. “Someday” speaks about our own mortality, and the fact that we all keep on chasing material possessions, and things we don’t need; but rather it is our friends and family that keep us grounded and that are more valuable and precious than the shiniest car and job. “Someday” encourages us to shift our priorities from the tangible to the intangible but more worthy in the end- and Ryan encourages us to make that shift now. While “Rescue Me” is a quasi-worship melody asking someone (a friend, a family member, even God?), to rescue us when we need help and assistance. As Ryan eloquently and prayerfully sings out ‘…would you rescue me? Would you get my back? Would you take my call when I start to crack? Would you rescue me? Ah, would you rescue me? Would you rescue me when I’m by myself? When I need your love, if I need your help, would you rescue me? Ah, would you rescue me?…’; we are encouraged to be more in touch with our friends, family and our Maker.

I could speak more and more about the rest of the album… but I won’t. I’ve specifically spoken about the songs from One Night In Malibu that I have resonated with the most, but in essence this live ‘greatest hits’ album is very strong no matter which song is your preference. Sure, there are more songs present from Human, but that’s to be expected considering it is the band’s latest album and this is a concert promoting the latest album. And with these songs comprising a lot of heart, soul, inspiration and purpose, I’d say this album is an album for all seasons, and that’s the beauty of any OneRepublic song in general. They’re extremely hard to hate. In this very moment with so much uncertainty; I’d have to say that the future is unknown in all facets- economically, emotionally, relationally… but with albums like Human and One Night In Malibu to listen to, hope is still alive in the hearts of all of us, as we hang onto our humanity and our strength. While I myself are of the opinion that right now we need more and more new music to get us through, I for one agree somewhat with what Ryan Tedder mentioned in 2020, in that releasing new music while a pandemic is going on seems a bit insensitive.

Yet every artist is different- and at least there is still uplifting music around if you only know where to look. We all may not have understood why OneRepublic kept delaying Human; but as long as we can be reminded to cherish the ones you love and to chase after your dreams and whatever else is in your heart, then I am certain that we will see the light at the end of the tunnel in the coming months and years! With OneRepublic presumably releasing another brand-new studio album due out in May 2022; OneRepublic isn’t slowing down. There’s still life in these guys yet… and can we say that One Night In Malibu both closes an old chapter and opens a new chapter for these guys, maybe one that hopefully will be longer than the previous chapter? Well done guys, for one of your most rounded albums yet! And I can’t wait to hear whatever comes next!