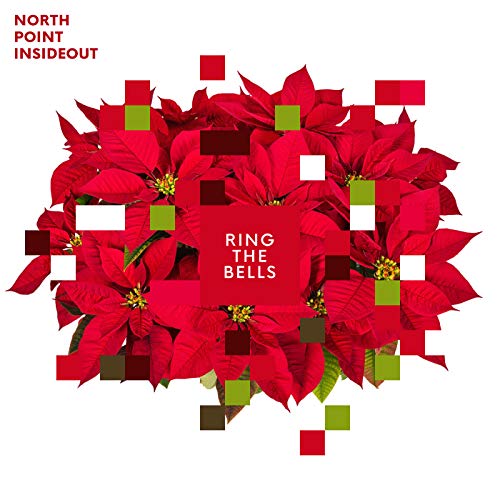 Since signing to Centricity Music (home of artists like For All Seasons, Jason Gray, Andrew Peterson, Carrolton, Caitie Hurst, Lauren Daigle and Unspoken, to name a few); North Point InsideOut have had quite a steady and solid career, unveiling a few EPs and a slew of radio singles, inclusive of the chart-topping ‘Death Was Arrested’ (which was sadly robbed of its spot on WOW Hits 2018). Nevertheless, North Point InsideOut (inclusive of artists like Seth Condrey, Chris Cauley, Clay Finnesand, Heath Balltzglier and Brett Stanfill- yes, brother of famous Passion Music artist Kristian Stanfill!) soldiers on, and this time they unveil to us a 4 song EP just in time for the Christmas season, titled Ring the Bells and comprising of 4 all-originally written songs for this time of year. And while North Point InsideOut can seem like one of the many, many worship movements, bands and artists out there, there seems to be something unique and special about this group. Delivering music not necessarily on a mass-production scale (like Hillsong) nor does the music seem long or dragged out (like Jesus Culture), this team of worshippers have united to create music that is easily accessible to the church, having the ability to allow common folk like you and me to sing alongside this movement, but also be reminded that such songs like these are equally ours to declare as it is theirs to sing over us. The songs the band have unveiled over their little over 2 year career under Centricity Music, are heartfelt and emotive, and that is particularly true of this brand new EP as well. Though there are indeed no carols here reinvented (because frankly, listeners nevertheless respond better to carols during this holiday season than to originally written Christmas songs for this season), these 4 tracks are powerful and grounded biblically in scripture, making these songs some of the most emotive and worshipful I’ve heard since songs like ‘Noel’ (Chris Tomlin/Lauren Daigle), ‘Light of the World’ (Lauren Daigle), ‘A Christmas To Believe In’ (Matthew West) and ‘Somewhere in Your Silent Night’ (Casting Crowns).

‘Ring the Bells’, the title track, starts off the EP with traditional Christmas fashion as bells and whistles begins a track that I reckon is the strongest- musically and lyrically, on the EP. With lead singer Clay Finnesand, placing on his Eddie Kirkland meets Steve Fee hat, we are met with a sense of urgency to ring the bells- a metaphorical moment where we realise that everyone, and I mean everyone, needs to know about the birth of Jesus Christ. And so the phrase ‘ring the bells’ implies for us to have a sense of urgency to spread such a gospel as this- that Christ Jesus came as a baby to save humanity from themselves and death itself. Such a message is paramount, and this song hopefully causes us to have urgency surrounding the seasons of both Christmas and Easter. ‘Emmanuel (Hope of Heaven)’ follows, and this time featuring one of the most senior members of the group- Seth Condrey. With Seth also singing on ‘Death Was Arrested’, we hear him cry out on this song too, to the Emmanuel. While this song is very biblically sound and much grounded in the teachings of God Himself, I can’t help but think that this song was actually written once before (not the exact words but a similar theme)- Chris Tomlin’s ‘Emmanuel’ comes to mind from all those years ago. And while I much appreciate Seth for this technically sound effort, the song itself can seem like a blur and a pale moment when placed next to Chris Tomlin’s powerful and encouraging Christmas radio hit from yesteryear. Nevertheless, Seth’s passion can’t be denied in a song whose theme has been tried before. The song itself may resonate with a lot of people, but sadly, I myself don’t really feel as strongly about this song, because of the repetitious lyrics and the thematically similar moments between this one and Chris Tomlin’s hit! Still, the band presses on, unveiling their last 2 songs in ‘Glory Born’ and ‘Jesus Our Saviour’, the former being a song full of ooohhhs and repetition as lead singer Heath Balltzglier presents a song lyrically simplistic yet thematically impacting as we understand that ‘…His every breath is breathing hope, innocence of saving grace, oh, a baby born to take our place…’, while ‘Jesus Our Saviour’ ends the EP with a reflective moment about how each of the wise men, the shepherds and the angels responded because of the news, and how we as people living in the modern technological world ought to respond as well.

There you have it- Ring the Bells EP, by North Point InsideOut. While the band itself may not be as popular now, these four Christmas original songs are bound to bring this group under a microscope for all the right reasons, both now and into the future. With songs like the title track declaring fervently to ring the bells (both literally and metaphorically) because Christ has come to us, to the song ‘Glory Born’, arguably the most vibrant and declaratory song on the EP and one that an artist like Building 429 could have fun covering; this is a set of songs that are entrenched in truths that are deeply rooted in who God is and what He knew He had to undertake for us to be brought back to Himself without condemnation and judgement. And while the only mishap (if any) is that the EP was a tad too short- 7 or 8 songs would’ve been better; North Point InsideOut nevertheless deliver hope and belief, passion and songs to declare and proclaim, during such a season where busyness and a hurried atmosphere is promoted above reflection and tranquillity.

3 songs to listen to: Ring the Bells, Glory Born, Jesus Our Saviour