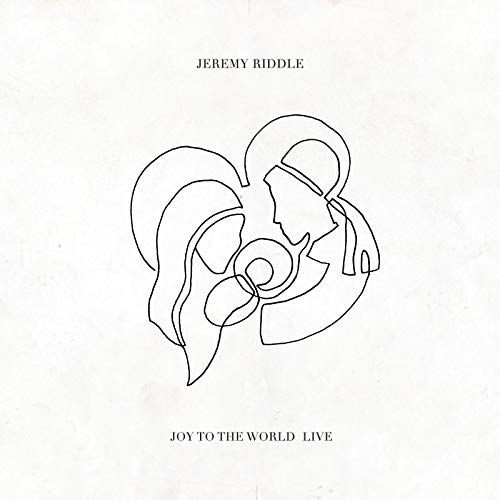 Jeremy Riddle is one of those artists you know the songs of, but don’t really know him per se. I mean, he co-wrote ‘This is Amazing Grace’ with Phil Wickham, yet, now, every time it is sung, we all know it as the song from Phil, even though the song itself was on an album prior to Phil’s recording of it on The Ascension– Bethel Music’s For the Sake of the World. Let’s just say that Jeremy Riddle will continuously be known for his songs, even if in the future, they attribute them to another artist before him (especially the co-writes). Nevertheless, Jeremy has been a part of Bethel Music for quite some time- delivering and writing songs that have shaped the world and worship landscape of both now and in the future. Songs like ‘Sweetly Broken’, ‘You are Good’, ‘Furious’, ‘The Lord is My Shepherd’, amongst many more, are some of the songs written and recorded by Jeremy that have made an impact amongst people at the moment. Enter in another project from Jeremy titled Joy to the World (Live) (EP), a 5 song album full of Christmas carol covers sung and declared in a worship setting as we realise that these carols are in fact worship songs that will hopefully usher us all into a state of glory and thankfulness as time continues to roll along.

The heart, the burn, behind this Christmas project, the thing that I want to see restored to the church in so many ways is wonder. I want all restored to Christmas. Christmas is like one of those crazy seasons, I sincerely…I love it all. I love everything that we fill it with, I love Christmas trees, you can ask my kids, I deck out my house to the nines with everything, there’s even Santa’s there’s all of it. But there’s something about remembering what’s at the heart and the centre of what we’re doing, what we’re celebrating in this season, remembering Jesus, remembering this crazy moment where everything changed. And for me I guess it’s about discovering worship again. There is no worship without wonder and awe- wonder and awe is the heart of worship and I care so much about the heart of something. So no matter what I’ve given myself to, no matter what I’ve gone after in my life, it’s always come down to what’s the heart behind this, I have to find the heartbeat of this. And in some ways you have a story that’s thousands of years old and not only that, it’s been told not just by the church but by secular culture, it’s been redefined, it’s almost got so many layers upon it, that it almost loses its impact. But I think about the guy who wrote ‘o holy night’- I know he didn’t sit down and go ‘you know it’s going to be a great song. Just for families to light a fire, get some eggnog’. I feel like he wrote that in such a divine and inspired moment, like on his knees, like wrecked with the revelation of the incarnation of God taking on flesh by coming into this earth in a radical lowly way. Everything that God did was intentional, the way that He came was intentional, like He planned it that way. This was the thing in His heart- ‘this is how I’m going to reveal my royalty. This is how I’m going to reveal my nature, this is how I’m going to reveal what I am like, and I’m going to come into your order and I’m going to embrace the fullness of your experience’. I think if you want to recapture the spirit of something, you want to recapture the original power of a song, you have to restore it to it’s original context, and none of these songs [on the EP] were really meant to be background music at Walmart, they were meant to lead us into an encounter with the Saviour, with the nature of God Himself, they were meant to be sung in worship, they are worship songs

It is in the light of this profound quote above by Jeremy in a behind the scenes video on youtube, that I will say this- this album, though only Christmas carols, is as much enjoyable to sing along as it is as we listen to a worship service- this collection of songs moves us from a place of busyness into a place of restfulness as we worship the King of Kings. Yes, all these songs on this EP are indeed played at shopping centres galore around this time. But every so often, what we need is to hear such a song as it was originally intended- for said song to bring us from a place of restlessness into one of rest through worship. And this new EP has done so- maybe even more so as we understand that carols are just worship songs for the Christmas season. Sometimes I hear carol renditions by artists who may or may not be Christians, and I often wonder whether the Lord uses that music, by someone who may not believe in the words themselves, as much as He could use yet another Christmas album by a Christian artist- and the answer is ‘yes’. God can and will use anything for our attention to be received by the Lord. And that includes impacting our lives through pop Christmas songs sung by mainstream artists, or even by this new EP by Jeremy Riddle. And with such a stellar and impactful quote by Jeremy about the Christmas season as a whole, we can see that this artist is not finished yet. Maybe, just maybe, considering this is just an EP, there’s another full length Christmas project coming up later on? Nevertheless, this is a must have if you enjoy worship music, Christmas music or both. Kudos to Jeremy for creating this in a style that isn’t really explored much today. Here’s hoping that Jeremy’s new album, be it Christmas or otherwise, can have the same effect on people as this brand new EP!

3 songs to listen to: Joy to the World, O Come All Ye Faithful, O Holy Night