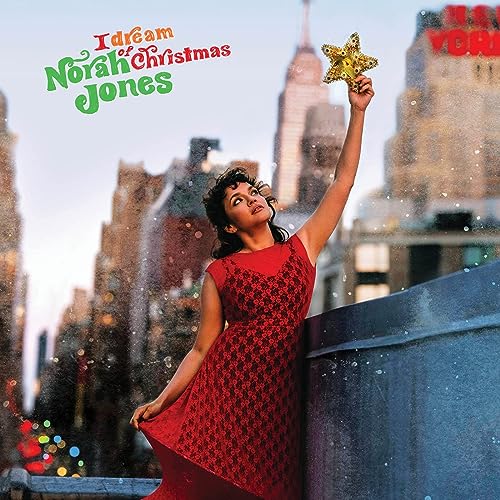 Singer/songwriter and pianist Norah Jones was one of the artists who sadly missed out on Jon’s and my blog series about influential artists. The jazz singer was always in and around the list of 100 names, and thus I have sort of semi-listened to her discography. Songs like “Don’t Know Why”, “Sunrise” and “Come Away With Me” in particular stand out in and amongst a pretty underrated and often overlooked discography; and though we tried to fit Norah in our blog series, we just couldn’t. Norah is an artist whom I have heard some songs, but would’ve liked to hear more, but hadn’t had the chance. Now, with today being Christmas Eve and this season being the perfect opportunity for me to listen to branch out and listen to some Christmas albums by artists whom I wouldn’t normally listen to in order to expand my musical palate; I guess it seems like the perfect time to branch out into Norah Jones, especially with the release of her Christmas album I Dream Of Christmas, which released at the beginning of this month. If you read our Christmas reviews lately though, I guess you can see that there’s a lot of holiday albums that have released over the past year. Yet Norah’s Christmas album is one of the standouts and a must listen today or tomorrow, or even into the new year!

My album Pick Me Up Off the Floor felt so pandemic-y, even though it was written before. And this year, I just felt like … I needed something to look forward to, so I thought I would see if I felt like making a Christmas album. And the deeper I got into thinking about it, the more excited I got about it. And then it became the perfect thing to look forward to for me, so hopefully that’s how it feels.

I started thinking about it [Christmas] in January [2021] when the tree came down and I got really sad. And I thought, “Well, what else am I gonna do this year?” I’m not gonna go on tour, and I had a few songs kicking around, but without being able to get together with people easily, it seemed like I didn’t really know what to do. Then I found Leon Michels, and he seemed like someone cool that I would want to work with. And we started, we tried to make a song and it was pretty great, and I asked him what he thought about trying to make a Christmas album. So it just sort of snowballed from there. It was probably February when I started talking to him about it, and then March when we started really heavily digging deep. And it was still cold out, so it felt appropriate—it still helped. But I never want to let go of the holidays—in January and February, I always get really sad that there’s no holiday. So we had some pretty awesome playlists going back and forth, with some really obscure songs. And I knew that we could make this with all covers, and all classics, or all obscure classics—whatever. But then I started writing songs, in early March, maybe? And I got inspired, and probably all of the ideas for all these songs came within a few days. And it sort of helped inform what the album was—it was more about, you know, dreaming of Christmas, because I literally was! In February! So that’s kind of what the album ended up as.

To tell you the truth, I’m not really into jazz music, but Norah’s Christmas album has really inspired me to at least explore the genre a bit more. Album opener “Christmas Calling (Jolly Jones)” is an original that grabs all of my emotions and gets us all up in our feelings- this revealing, honest and vulnerable ballad speaks about longing to feel joy and happiness around Christmastime instead of feeling worthlessness, emptiness and sadness. With Norah earnestly relaying that she wants to dance and laugh and have a happy holiday instead of being all alone; we are presented with a melody that doesn’t paint a happy picture of Christmas, but a real picture nonetheless of what a lot of people may be facing this year. With the opener reminding us that we should never take the holidays for granted and we should always cherish our time with our friends and family, Norah delivers and delivers immensely, as she sings out one of this album’s highlights.

The rest of I Dream Of Christmas is inspiring, thought-provoking, honest, and so, so needed this holiday season. “Christmas Don’t Be Late” is a slowed-down jazzy interpretation of the popular holiday track “The Chipmunk Song” from Alvin & The Chipmunks; while the original “Christmas Glow” is a cheerful and joyous melody about longing to feel that Christmas spirit and glow. “White Christmas”, one of the most famous holiday songs ever, is serenely and powerfully covered here to great professionalism with Norah using the piano in the forefront to great effect (and to me is now one of my favourite covers of the song ever!); while the gospel-infused “Christmastime” is an original track that to me is one of the most inspiring original Christmas melodies, with Norah delving deep into the wonder and awe and specialness and sacredness of Christmas time. While Norah also delivers on point musically and vocally with Elvis Presley’s smash hit “Blue Christmas”- as Norah highlights how she’ll ‘…have a blue Christmas without you, I’ll be so blue just thinking about you, decorations of red on a green Christmas tree, won’t be the same deer if you’re not here with me…’, reminding us that Christmas without loved ones around us can feel blue, and thus friends and family around the holidays is a must.

Subtly referencing the pandemic of COVID-19, the original “It’s Only Christmas Once A Year” is a piano ballad speaking about the importance of family and friends and being together, despite the adversities and unforeseen circumstances we all might face (and is so, so deep for its length of only 2 minutes!); while the semi-worshipful gospel track “You’re Not Alone” is as inspirational as can be. With Norah penning the song with producer Leon Michels, the song speaks about us not being alone and that we can lean on Jesus when we’re feeling down. But though the track does include some theological shaky aspects (Jesus wasn’t born so that we each could make our own way, but rather so that we can worship Him and point people to Him and His sacrifice on the cross!); at least Jesus’ name is being sung and at least discussion about Jesus can be undertaken around the dinner table. “Winter Wonderland”, another popular holiday classic, is featured here as well, with Norah once again knocking this rendition out of the park (although pop enthusiasts would complain that this version is super slow and is altered in its sonic composition beyond recognition!); and “A Holiday With You” is another melody that is moving, inspiring and hopeful, as Norah implores her partner to travel with her on a holiday in order to escape the hustle and bustle and the crazy times of shopping.

“Run Rudolph Run” is usually an upbeat holiday melody, but Norah transforms this track into a jazzy, bass guitar led 50’s inspired track- which is quite different but still powerful, mysterious and haunting to listen to; while Norah also delivers once again with the captivating and transfixing paino ballad “Christmas Time Is Here”. I Dream Of Christmas then ends with the iconic and legendary Ella Fitzgerald jazz tune “What Are You Doing New Years Eve”, proving to us that Norah probably should have been on my list all along (but really, how can she dethrone Rihanna, Kylie Minogue or Robbie Williams?). I Dream Of Christmas then includes three extra tracks on the deluxe edition of the holiday album, with the originally penned moving title track (a personal album highlight), the gospel infused “Last Month Of The Year” (originally recorded by The Staple Singers) and the iconic holiday classic “I’ll Be Home For Christmas”, all superb additions to an already strong track list that delves deep into the meaningful songs as well as the fun holiday tunes.

That’s [presents and Santa] probably the most important excitement, and I can see it in my kids’ eyes—it’s just so sweet and fun. I don’t feel that for myself, but it’s fun to revisit through your kids, or any kids that are nearby. And my kids are still little, but I think also there’s that thing where sometimes a kid becomes older, and they still believe in Santa. But you can tell that maybe they don’t—maybe deep down, they know, but they still want to believe. And I think it’s going to be important for them to hold onto that for as long as they want, you know? But then there’s a fine line to that—you don’t wanna be blind to your kids and putting up some charade. But I think it’s nice to prolong that feeling. I miss that feeling!

I’ve learned not to predict anything [in light of the pandemic]! But I think a lot of these songs were written out of that feeling of missing Christmas, or wanting it to come, or wanting to get into the spirit, but not quite knowing how. So for me? It’s been Christmas all year already, so I’m excited for it, personally. But I also live with little kids, so it’s a built-in Christmas—it’s gonna be Christmas no matter what’s going on outside.

It is true that I’m not really a fan of jazz music, and that statement is true still. But it also is true that I found Norah Jones’ Christmas album I Dream Of Christmas to be one of the most compelling, moving and inspiring Christmas albums of the year. It’s a dichotomous feeling, really, and I’m not really sure how to define such a superb album, from a genre I don’t normally listen to. But rules were made to be broken I guess… and so I say, listen to this album and listen to Norah Jones’ discography. That’s not a suggestion everyone, but a directive. And that’s it. That’s all. You’ll definitely thank me later. And thus, as we sit back and worship Jesus simply because of who He is, let us bask in the awesomeness of this near-flawless Christmas album. Truly, there’s nothing better in my opinion!

4 songs to listen to: Christmastime, You’re Not Alone, What Are You Doing New Year’s Eve?, I Dream Of Christmas