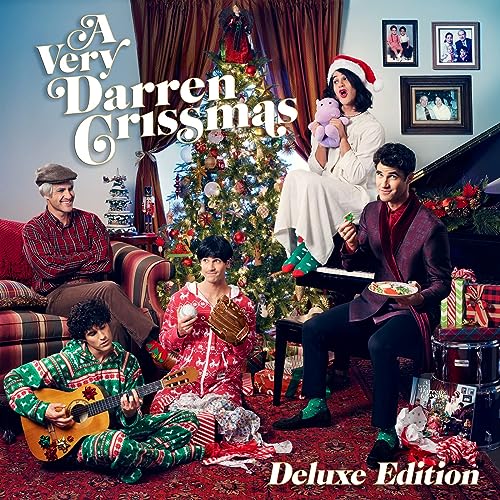 Let me just say from the outset that I’m not really a fan of Glee. Darren Criss, who rose to fame because of Glee, and has wowed the world on Broadway; recently released his brand-new Christmas album A Very Darren Crissmas… and in the spirit of Christmas and the upcoming holiday season, plus the fact that it is Christmas Eve… I’ve decided to take the plunge and the leap of faith and see what his Christmas music is all about- even if I’m not well versed at all in his material. The other year I blogged about Lea Michele and her burgeoning influence as a singer, and spoke at great length of how I probably would not have written about her had Glee not blown up the way it did. Well… perhaps you could say the same thing about Darren and his music. I know nothing of his musical genre- because frankly Glee isn’t my thing, and I was indifferent to Darren’s solo music in years gone by. But A Very Darren Crissmas is one of the most unique Christmas albums I’ve heard in a long while. I wrote in an earlier Christmas review that one album can alter your outlook on a certain artist for the better- and this certainly is the case for the very creative and musically daring holiday album from Darren!

I didn’t want it to be, or seem in the slightest, like a surface-level, sort of commercial cash grab. That was like, the anti-what I wanted to do. [So releasing a Christmas album] It had to be very, very, very me. Which requires a few things. It has to have left-of-center choices musically, things that people don’t know at all. It’s gonna be seemingly cheeky but hopefully (have) a lot pathos. Just a lot of stuff that I subscribe to.

And trying to whittle that down to make it the most sort of honed version of what I just said was the goal and the obsession for the past year. And that’s why it’s called A Very Darren Crissmas. Other than the obviously convenient pun of my last name, it is a very me thing — with who’s on it, how I recorded stuff, how I produced stuff, how — the whole thing.

Christmas in and of itself- the celebration of Jesus and His birth and Him coming down from heaven to earth in a manger as a baby to save mankind from sin and from themselves- is rather quite big and grandiose; and Darren’s album from the outset reflects that gigantic nature and the enormity of what Christmas is truly about. Album opener “Happy Holidays / The Holiday Season” is a booming, joyous and celebratory occasion, as Darren earnestly and confidently relays to us ‘…it’s the holiday season, so whoop-de-do and hickory dock, and don’t forget to hang up your sock, ’cause just exactly at 12 o’clock, he’ll be coming down the chimney, down…’, whereby we hear one of the most enthusiastic versions of this holiday classic in recent memory (aside from Michael W. Smith’s version, of course!); while the cheer and joy continue with “I Want A Hippopotamus For Christmas (Hippo The Hero)”. EDM and remix-y in musical nature, Darren brings the positivity and optimism in spades with this nonsensical bundle of fun and joy and happiness; while Darren recruits Queen frontman Adam Lambert on “(Everybody’s Waitin’ For) The Man With The Bag”- a track about Santa and the fact that people can’t wait for presents on Christmas Day.

With Darren bringing the joy and fun in these upbeat tracks, he also inspires us and comforts us with a ballad in “St. Patrick’s Day”, originally by John Mayer, proving he’s not a one-trick pony. A song that was previously recorded on John’s 2001 album Room For Squares, we are presented with a melody that isn’t about Christmas pre se, but does speak about the holiday and about how no one wants to be alone during the holidays, and that everyone longs to be with family and friends. Unfortunately, “River” by Joni Mitchell is completely butchered, from a peaceful piano ballad (the original version, plus versions from Pentatonix, Delta Goodrem and Jackie Evancho) to an upbeat jazz-infused pop tune, which absolutely reeks of ‘revamping for revamping’s sake’. Thankfully, Darren steps back on track with “Welcome Home”, originally from the musical Fanny. A song about feeling at home and being satisfied and content, this song isn’t a Christmas song also like “River” and “St. Patrick’s Day”, but it does somewhat give off a Christmas-y atmosphere.

“All Those Christmas Clichés” is a song I hadn’t heard of before, however the track isn’t an original, but a cover from Nancy LaMott. Darren records a stirring and poignant cover here and delivers a memorable song about wanting to have the Christmas clichés in our lives despite them being clichés- simply because they do in fact give us a warm and fuzzy feeling inside; while Nat King Cole’s “The Christmas Song” is solid, although not that spectacular when compared to the near-flawless and sublime version from Newsboys. “Somewhere In My Memory” with Evan Rachel Wood though, is quite easily Darren’s crowning achievement, as he and Evan beautifully and powerfully deliver the theme song from the film Home Alone, with aplomb, professionalism and grace.

“New Year”, originally by Regina Spektor, is an exquisite, hard-hitting and moving look at how one person longs to appreciate the upcoming new year, with the track also vividly delving into their hopes and dreams- Darren records this album closer to perfection; however “Have Yourself A Merry Little Christmas” is one of the most over-recorded songs in Christmas history- this version does nothing to me and is uninspired and quite frankly boring, even though Darren’s vocals are on point. A Very Darren Crissmas then ends with “Drunk On Christmas”- the album’s only original song, and a country/bluegrass track with Lainey Wilson on guest vocals. A carefree and exuberant track about being drunk on Christmas, this melody doesn’t take itself too seriously and is a lot of fun to listen to.

I feel like at some point in a musician’s life, we all wonder what sort of Christmas album we would release. It’s a genre that happens once a year and you can’t avoid it. I’m a big fan of holiday music and I’ve always been fascinated with how the rules change just for the season.

As a self-proclaimed genrephile, I can’t help but be fascinated with musical ecosystems. I’ve always wanted to make a Christmas album, but I didn’t want it to be a cash grab but a significant part of who I am. Arguably this one could be my most personal project. There’s been a considerable amount of time granted to us this past year, I would’ve been a fool not to work on the album, it’s something that’s been long gestated and considered.

There’s always gonna be another mountain always gonna be a new hurdle that everybody wants to get over. If I have five plates spinning, one’s gonna fall so a hurdle is trying to make sure that I can keep the plate spinning, but not at the expense and jeopardy of longevity. I thrive on chaos and, and I work best doing a lot of stuff, but I am envious of those that can just really focus on one thing and have done very well doing that.

Every artist’s greatest hurdle is themselves. I’d much rather fail with something that I’m proud of than succeed with something that I’m tepid about. To be a part of something that gives me prosperity, but no pride is a strange hell. I’m very lucky to say that that hasn’t happened a whole lot. There’s plenty of things that I have done that I don’t think a lot of people would know about, those things are huge points of pride for me and were huge turning points in my life.

With the deluxe edition of A Very Darren Crissmas containing 2 extra tracks (another version of “Have Yourself A Merry Little Christmas”, this time with Lizzy McAlpine on guest vocals, as well as poppy radio friendly original track “Christmas Dance”), Darren Criss brings the joy and the cheer into Christmas, but sadly doesn’t bring Christ into Christmas. This album, bloated with 14 tracks, is all holiday cheer and the glitz and the glamour. However it does bring Christmas to the forefront and does make us think about why we celebrate the holidays, even if it is in the weird and wonderful ballads. Darren’s passion in also evident here. Basically, this holiday release is just fun… but if you’re looking for something deep and meaningful and all about Jesus, then I’d say look elsewhere. If you’re not a Grinch though, and you do want to dance this Christmas, and delve into the briefest of reflectiveness and introspectiveness, then this album is for you, ten times over!

3 songs to listen to: St. Patrick’s Day, Somewhere In My Memory, New Year