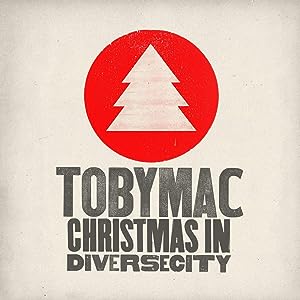 Initial thoughts: Feels like an album that is split in 2. Songs 1 – 6 are fronted by Toby and featuring artists like Owl City, Jamie Grace, Leigh Nash and Nirva Ready (but still with Toby at the helm), but 7 – 13 don’t feature Toby’s vocals at all- it’s like Toby got a bunch of his friends together in a room, and allowed them to run wild with the second half of the album. The result is a bit of a mixed bag- the album follows much better with the first half, than the second.

Reason to listen: the amount of collaborations. From Owl City and Leigh Nash (of Sixpence None the Richer), to Mr Talkbox, GabeReal (a frequent collaborator and backing singer of TobyMac- and a member of the DiverseCity band) and everyone else who have had their hand in the second half of the album, we have a glimpse into the joy that comes from the season of Decembertime and Christmas. All of Toby’s guests present a different way to view certain carols that we may have heard differently in years gone by.

Reason to buy: If you love guest vocals galore, or if you love Toby and his music, then this is a must-have. if you love to complete a TobyMac collection, then this is a must-have. Then otherwise, stream it on Spotify, and listen to the tracks ‘Christmas This Year’, ‘This Christmas’, and the awesome Toby/Owl City collab ‘The First Noel’. Everything else…well, it’s up to you if you want to sample the songs yourself- at least once.

Reason to skip: Actually, there’s a lot of them. Frankly, if anyone is under the impression that this will be a TobyMac album through and through, they may be disappointed- Toby’s only in the first 6 songs, and 4 out of the 6 are collaborations. The album feel is somewhat busy and overproduced- and with more than half of the 7 – 13 tracks, being from artists I don’t know, it makes it even harder to even check out the songs in the latter half of this Christmas release. Sometimes I feel like too many collaborations can often detract from the message itself- and most certainly, this album by Toby feels unfortunately like a trying-too-hard effort.

No of guest artists: Well, let’s see- at the very least 7 (because from track 7 – 13, Toby’s not present at all)…so counting it all up- 11 tracks featuring artists that aren’t Toby himself!

Does it have heart?: Not sure. I know Toby’s intentions are sincere, and I know that this album is certain to impact people during any Christmas season, but with a little more than half of the album being without Toby at all, it’s hard to overall get a clear and certain picture of whether the album is presented with heart by Toby, or not. Toby’s definitely a passionate and enthusiastic guy, and it shows on songs like ‘This Christmas’ and ‘The First Noel’. But it just seems like compared to the many, many album releases over the years, there seems to be something lacking in this Christmas album as a whole, that is most certainly there in songs like ‘Speak Life’, ‘Lose My Soul’, ‘City on Our Knees’ and ‘Tonight’.

Does it have a Christmas-y atmosphere?: It has a busy atmosphere. There’s lots and lots of instruments, a lot of rapping, adding verses to Christmas songs to ‘liven it up a bit’. The intentions are good, but the result can seem more like a noise-fest than something to reflect and ponder towards.

Uniqueness?: It’s unique, but maybe not necessarily in a good way. After the end of the album, I felt a little emotionally all over the place- these songs, though good intentionally, can seem too over-done, the more and more collabs can mean that the song itself is missing the very thing that people have been wanting to hear from the very start- Toby himself. This isn’t really a TobyMac album, I mean, it technically is, but from a marketing standpoint, it should be ‘TobyMac and friends’, and then the confusion would die right down.

Christmas message: Most certainly. Being 1/3rd of DC Talk, Toby’s message of hope, encouragement, and the gospel, has been seen in all of his music, and this certainly doesn’t change in this Christmas album. Songs like ‘The First Noel’, ‘Angels We Have Heard on High’, ‘O Come All Ye Faithful’ and ‘What Child is This’ all promote the gospel message of Christmas, and the December time period.

Closing thoughts: With such an album that had very high hopes (because of the name ‘TobyMac’ and the expectation that came with the name), the end result wasn’t as great as it could’ve been. With Toby present for only half of the album, it shouldn’t really be called an album from Toby if he wasn’t in it half the time. Regardless, the songs are good- ‘Carol of the Kings’ is an interesting mashup between ‘Carol of the Bells’ and ‘We Three Kings’, and is perhaps the busiest song on the album. Check it out if you are a TobyMac enthusiast, otherwise, there’s albums from Casting Crowns or Matthew West that are waiting for your listening pleasure.

3 songs to listen to: Christmas this Year, This Christmas, The First Noel

Yes/no; why/why not?: No. As much as I love TobyMac, and appreciate his role in the CCM industry, this album is only a Spotify-listen, and then cherry pick the songs too. Too many collabs and his absence from half the album, was the album’s downfall. Too many instruments and a mish-mash of genres into one, caused myself to have an experience that wasn’t the most memorable. But who am I to know? Check it out once, and if this is still one of your favourite Christmas albums come December, then good on you. For me- I’ll just stick with Matthew West or even Peter Hollens, please.