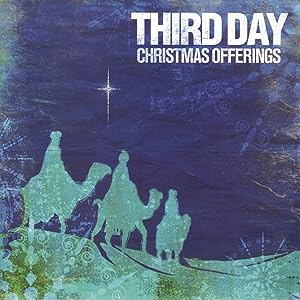 Initial thoughts: An album by the southern rock quartet who has delivered to us hits like ‘My Hope is You’, ‘Your Love Oh Lord’, ‘Cry Out to Jesus’, ‘I Believe’, ‘Come Together’ and ‘Show Me Your Glory’? Who is led by Mac Powell, born on the same day that we celebrate Christmas (25th December) and who looks very eerily similar (with a beard) to the westernised portrayal of Jesus? Yes, please, this is an album not to be missed- with a whole bunch of carols (a whopping 9 in a track-listing of 13) and four newly written original songs especially for the album.

Reason to listen: It’s a great southern gruff-sounding distinct voice that is unlike any other voice in the industry? No seriously, Mac Powell exudes great passion and presence in the band’s songs, and the band makes it effortless in giving to us songs that are carols, but are also given a rock-anthemic spin on it to bring the carols front and centre to a new generation that would otherwise not hear them.

Reason to buy: Ehhh…it’s Third Day, one of CCM’s legendary bands of modern music history? (Alongside Audio Adrenaline, Jars of Clay, Newsboys, MercyMe and Casting Crowns, of course!) Third Day’s impact and influence on CCM is unparalleled, and Christmas Offerings stands tall as one of the standout Christmas albums by any CCM artist within the decade of the 2000s. If you’re still unsure, just check it out on Spotify, and maybe, just maybe, songs like ‘Merry Christmas’ and ‘Christmas Like a Child’ can change your mind.

Reason to skip: Maybe if you’re too overwhelmed by the amount of carols on the album (9/13) or you are unsure about the studio v live format of all the ‘Offering’ Third Day Volumes, or if you don’t want to listen to a band whose lead singer looks like a westernised version of Jesus, singing about Christmas which is indeed about Jesus…so basically, there’s really no reason to bypass this album. From the opening guitar riffs of ‘O Come All Ye Faithful’ to the heartfelt lyric words of ‘Merry Christmas’, this album should be a joy and a gem of an album, to anyone who hears it.

No of guest artists: None. But the powerful gravelly distinct voice of Mac Powell is enough.

Does it have heart?: Heart abounds as much as God’s grace abounds here in this project. The guitars of Mark Lee and the vocals of Mac Powell are all on point, and we often forget that these songs are carols, and get lost in the initial thought that maybe, these are songs by them, in and of their own right- that’s how much they have uniquely shaped each song in accordance to their musical strengths. These are carols but the band have made them their own. Third Day have been a band that has shown us what it has been to cover songs prior to Christmas Offerings– songs like ‘Agnus Dei’ and ‘Creed’ are some of the powerful and poignant examples. And so in this album, their ability to expertly cover these carols, makes this album one of the best Christmas albums that the decade of the 2000s can give to us.

Does it have a Christmas-y atmosphere?: It has a rock atmosphere through and through, and maybe that’s ok, if the focus of the album is to bring in listeners of love rock music. So unfortunately, if you love big-band/jazz/piano-prominent music, this album from Third Day probably won’t be for you. Nevertheless, the lack-thereof of a ‘Christmas’ atmosphere, is well made up for, in the heartfelt lyrics of these melodies- ‘Merry Christmas’ and ‘Christmas Like a Child’ are two special and emotive ones for the band.

Uniqueness?: It’s Third Day, the man with a very distinct and gruff voice, it’s rock music, worship music, heartfelt original songs, and Christmas carols, what can be more unique than that?

Christmas message: Jesus is preached in this album, and for that, this gets 5 stars…no seriously, this album is probably the only Christmas album I’ve heard thus far that has virtually no holiday songs- it’s all carols or originals. And that in and of itself is saying a lot- Third Day mean business and want to not dance around the real issue of Christmas which is Christ’s birth. Nothing wrong with holiday songs- in fact, a lot of the holiday songs are reminding us all of the familial and camaraderie aspects of Christmas. But it’s always good to see a reminder of an album, that showcases the foundation of our own faith through music.

Closing thoughts: If you love live songs, studio songs, original songs, Christmas carols, a rock album, Southern-style singing with a distinct and gruff voice…if you love all of that, then you’ll love Christmas Offerings. If not…well, I dunno what to say. Howabout you just listen to the album, and hopefully original songs, like ‘Born in Bethlehem’, can change your mind. Christmas Offerings is for any rock enthusiast, Christmas music enthusiast, or both!

3 songs to listen to: Born in Bethlehem, Merry Christmas, Christmas Like a Child

Yes/no; why/why not?: Yes, Yes, and another Yes for good measure. Why? Because the album is sung by Mac Powell, aka ‘a Westernised version of Jesus’. Enough said! No, seriously, this album is great, and a joy to hear. Even 14 years later, the passion and emotion still hasn’t died out, and their original songs are just as emotional now as they were then.