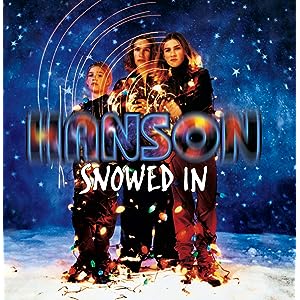 Initial thoughts: Hanson, a band famous and prominent in the 1990s, and famous for their chart-topping radio hit ‘Mmmbop’, released their first Christmas album at the end of 1997, that incorporated popular holiday songs, some Christmas carols, as well as originally written tracks. Has a record/vinyl sound that is very distinct to the turntable, present on the album. Considering that at the time of production, the members of Hanson were either under 10 or just above, this album as a whole is a great standout, and one of the brightest sparks of any other Christmas album by a mainstream band within the confines of the 1990s decade.

Reason to listen: I guess, if you’re a Hanson die-hard fanatic, then you would listen to the album. But other than that, I reckon it’s even hard trying to convince people that Hanson’s still in the business of making music right now, considering that frankly, all the band unfortunately is known for is in fact ‘Mmmbop’ and nothing else- which is pretty sad, considering, as per my blog, that to me they’re one of the most influential bands of the 1990s (and up til now!).

Reason to skip: If you have no clue who Hanson is…well, if you really think this album is going to be outside your comfort zone, then don’t bother. If you’re willing to take a gamble and chance on this 1997 record, and come in with zero expectations, then this album will become impressive.

No of guest artists: None. But all three brothers trade between vocals, so that makes up for the lack of guests.

Does it have heart?: It’s hard to decipher. All the three siblings sing very well, and a lot of the songs here on the album feel motivational and impactful (the original ones)…but sometimes I feel like the siblings are unintentionally singing over each other. The distinct Christmas instruments- bells, chimes, organs, tambourines, are somewhat drowned out, either by the guitar, or by the vocals themselves. Nevertheless, the album as a whole is one that certainly brings the Christmas cheer and atmosphere, but does it have heart…very, very unsure on this.

Does it have a Christmas-y atmosphere?: Just like with Michael Buble’s Christmas, Hanson’s Christmas album is complete with bells, whistles, chimes, organs, tambourines, glockenspiels and triangles, but sometimes the Christmas atmosphere isn’t enough for someone to enjoy such an album. I admired Hanson and their efforts in creating this album, but sometimes I felt that this album was created because of contractual obligations rather than themselves really wanting to- I mean, they were kids around the time of release of the project, I’d love to think that they knew the gravity of what they were singing about, but I’m not too sure. Nevertheless, there is a Christmas atmosphere, but sadly here, this album felt that it needed something more than that!

Uniqueness?: Yes indeed- the 1990s Christmas sound coupled with the big-band/Christmasy atmosphere synonymous with Michael Buble, coming together. And Hanson’s album is a reminder of this. The trio wrote new songs especially for the album- is that unique enough?

Christmas message: A little bit- the lone medley is one of Christmas carols- ‘O Holy Night’, ‘O Come All Ye Faithful’ and ‘Silent Night’. While all these three songs have individually different tempos, the songs somehow mash together nicely. With every other song being of a non-religious nature, the album as a whole is a holiday/celebration/family/feel-good album with a token carol song thrown in. This album is certainly created for those who celebrate Christmas for the holiday/family aspect…but if you want an album that places importance on what Christmas actually means; then check out Steven Curtis Chapman’s 2005 album…after this album of course.

Closing thoughts: These brothers are definitely talented, and when the album was unveiled at the end of 1997, they were still riding the wave of ‘Mmmbop’. This Christmas album has been well-received as time went on, and is a great way to take a trip down memory lane, into an album from the 1990s, to see how music was created back then, and realise that it’s not much different to music nowadays.

3 songs to listen to: At Christmas, Christmastime, Silent Night Medley

Yes/no; why/why not?: Personally I wouldn’t, I’ll just listen to a few tracks here and there on Spotify. Dunno about you all though. In fact, this album is perfect background music during a Christmas lunch/dinner, or whenever you’re hanging up the Christmas tree. Other than that…I guess read into this ‘review’ what you will. Hanson are a feel-good/joyous band. But albums like All I Really Want (Steven Curtis Chapman), Home For Christmas (BarlowGirl) or Behold the Lamb of God (Andrew Peterson) are some of my go-to Christmas albums before this one!