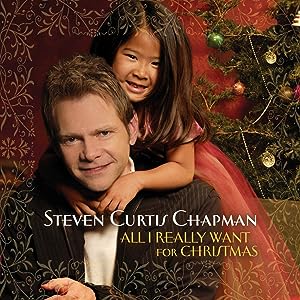 All I Really Want For Christmas

Initial thoughts: Categorised in the same vein as Michael W. Smith and Amy Grant, in terms of how they three are the longest-standing CCM artists to still release music currently (all these three started making music in the 1980s); Steven Curtis Chapman’s 2005 Christmas album (his third at that time), All I Really Want For Christmas, is a great mix of carols and original songs. While some carol classics have been sung and recorded to death- ‘Go Tell It on the Mountain’, ‘Silver Bells’, ‘Winter Wonderland’ etc., it is the original songs that really stick out for me, that have become some of my favourite originally-written Christmas songs of all time.

Reason to listen: ‘All I Really Want’, ‘The Miracle of Christmas’ and ‘Christmas is All In the Heart’, alone, should encourage everyone who is a fan of music, period, to at least check out this album, pronto, if only once. Nothing much to say more- Steven’s actual body of music work speaks for itself, but in case you are not really moved by all this- just watch the ‘All I Really Want’ music video on youtube, and tell me if you don’t cry afterward. This album is one of the classics of the 2000s, and Steven’s portrayal of love unconditional in the form of a song about children adoption, is a reminder of the love that God has for His creation. An amazing reminder of not only the Christmas story but rather the Easter one as well.

Reason to buy: It’s Steven Curtis Chapman. One of CCM’s most pioneering artists who shaped and changed CCM to what it is today. Who inspired some of today’s greats like Matthew West. Steven’s influence is unparalleled and undenied, and this album, if you don’t own it, ought to be purchased immediately- so that you can finish your Steven Curtis Chapman collection, and be reminded of just how emotive, poignant, heartfelt and encouraging this artist really is.

Reason to skip: Anyone who isn’t moved whatsoever by listening to the song ‘All I Really Want’. No, seriously, if you’re not the slightest bit moved from hearing, arguably the most powerful and emotive originally-written Christmas song ever; then there’s no reason to convince you all anymore- just listen to Michael Buble’s Christmas, and let that be the end of that!

No. of carols: 8 (inclusive of a re-worked ‘Angels from the Realms of Glory’)

No. of originals: 4 (inclusive of a re-working of Christmas is All In the Heart)

No of guest artists: The album is bookended with 2 spoken word tracks. The first is Steven’s daughter Shaohannah rereading Luke 2:7-14, while the last ‘track’ is both Shaoey and Steven saying ‘Merry Christmas’.

Does it have heart?: Immensely so. Every time I hear ‘All I Really Want’, I can’t help but become emotional- it’s just a God-anointed song, full of emotion and poignancy. As for the rest of the album- it follows suit quite nicely. All the original melodies are great from Steven, and his renditions of Christmas carol classics are also joyous- with the acoustic guitar firmly in the forefront; we see Steven’s heart for children and ministry, as well as showing us in his own way, the birth of Christ.

Does it have a Christmas-y atmosphere?: Standing at 15 tracks, the overall feel of the album is one where you can put the album on in the background, but stay focused and attentive on the songs ‘All I Really Want’, ‘Christmas is All In the Heart’ and ‘The Miracle of Christmas’. It is those three songs that anchor the album thematically, musically and stylistically. And even in these songs, the shakers, bells, whistles, and light keyboard sounds, all evoke a certain ‘Christmas-y’ sound as we are placed into this song list that reminds us all of how Christmas in the Northern Hemisphere sounds like.

Uniqueness?: I mean, not as unique as other big-band jazz albums, or albums with harmonies. But nevertheless, the album still has heart, and that is the only thing that we can ask for. What it indeed unique though, is that ‘All I Really Want’, the standout Christmas song by Steven, actually ended up on the WOW Hits 2007 DVD that was unveiled in October 2006, an annual album showcasing standout songs on the radio in any given year. Pretty unique and cool, right?

Christmas message: Christmas message aplenty in this album. Especially on songs like ‘The Miracle Of Christmas’ and ‘All I Really Want’- though that song was technically about orphaned kids writing, longing for a forever home; we’re indeed reminded of the lengths that God went for us to become adopted into His family- through the birth, ministry, death and resurrection of Jesus here on Earth!

Closing thoughts: Do yourself a favour. Please buy this album. Or at least stream it multiple times on Spotify. If only for ‘All I Really Want’. In fact, anyone who loves CCM or admires Steven Curtis Chapman, will listen to this immediately. For anyone else who doesn’t know who Steven is, well…google him. Then you’ll know…and now that you do, check out this album. One of the best Christmas albums, period, of the 2000s decade!

3 songs to listen to: Christmas is All In the Heart, The Miracle of Christmas, All I Really Want

Yes/no; why/why not?: Yes…why? For reasons I detailed above. This is a must-have for anyone who loves Steven’s music. And anyone who wants to be challenged by not your average Christmas album, but one that can hopefully encourage us all into action in the upcoming years ahead!