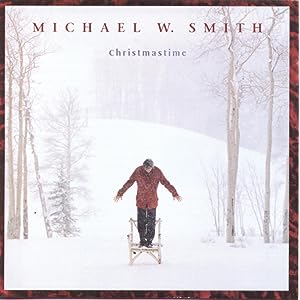 Initial thoughts: Michael W. Smith has made a career of creating accessible pop-rock with a firm importance and placement on piano driven music. His Christmas albums are especially exquisite- for me my favourite is his 2014 album full of collaborations with country artists like Lady A, Little Big Town, Martina McBride, Carrie Underwood and Jennifer Nettles, to name a few. But I reckon it was his 1998 album entitled Christmastime that really put Michael’s musical ability on the map- this was years before his 2000 groundbreaking album Freedom. Christmastime is an iconic album of Christmas music by any CCM artist during the 1990s decade- if you were alive in the 1990s, and loved and enjoyed CCM, then I’m sure you’d probably have heard about Christmastime.

Reason to listen: It’s Michael W. Smith. It’s Christmas music. It’s 1990s music. It’s instrumental Music. it gives us obscure Christmas songs like ‘O Christmas Tree’, ‘Christmastime’, ‘I Saw Three Ships’ and ‘Sing We Now Of Christmas’, to name a few. Or shall I just say, all of the above? It’s an absolute treat to listen, if this album doesn’t put you into the Christmas spirit leading up to December, I dunno which album will!

Reason to buy: Do people buy Christmas CD’s nowadays? I thought everything is able to stream on Spotify? No seriously, this is an album to purchase, if you’re the purchasing type. But if you just stream your music, then this album is 100 times yes to stream. This is an album not to be sleeping to, as we see Michael carve one of the 1990s best set of Christmas songs, reminding us all of his wonderous instrumentation, and his ability to pick songs that are well known but also unknown, all at the same time.

Reason to skip: Because you don’t love instrumental music, Christmas music or even Michael W. Smith? Because there’s not enough Christmas carols? No seriously, everyone should give this album at least one spin through, before judgements are made.

No. of originals: 4, inclusive of Chris Rice’s song, ‘Welcome to Our World’

No of guest artists: 2- Phil Keaggy on ‘O Christmas Tree’ and Sandi Patty on ‘This Christmas Waltz’

Does it have heart?: Well, it’s part instrumental, so I guess it does? The album as a whole does have a 1990s feel, as well as a Christmas-y atmosphere, the worshipful songs are sung with great passion and enthusiasm.

Does it have a Christmas-y atmosphere?: Yes it does. From the first glance at the album cover, we see Michael in the snow and a sled, reminding us all that the season of Christmas is upon us all, sooner than we think. With bells and whistles, shakes, keyboards and string instruments, there is Christmas music in abundance on this album.

Uniqueness?: With Christmas albums from Steven Curtis Chapman and Avalon releasing during the 1990s that have a similar musical style compared to this album from Michael W. Smith; the album isn’t as unique as we all think. Regardless of the lack of uniqueness on the album, the passion and musical arrangements make up for it all,

Christmas message: A little bit. There’s ‘We Three Kings’ and then that’s about it. Mind you, Michael doesn’t necessarily have to present each song on the album with a biblical Christmas message ofr it to be enjoyed and respected, right? Yes, Christ’s birth is the cornerstone of our faith, but Christmas songs (holiday songs) are just as much a part of secular society as they are important and integral for my own life too.

Closing thoughts: Michael’s 1998 album is a must if you love Michael’s music discography as a whole, or if you love 1990s Christmas music. Though it doesn’t really typically stand out amongst all the 1990s Christmas albums, the unique selection of songs on the album can hopefully draw people in to listen to it, at least once.

3 songs to listen to: Christmastime, Welcome to Our World, We Three Kings

Yes/no; why/why not?: Yes if you’re a Michael W. Smith fan. If not, then just Spotify the album and just cherry-pick the songs that seem to interest you.