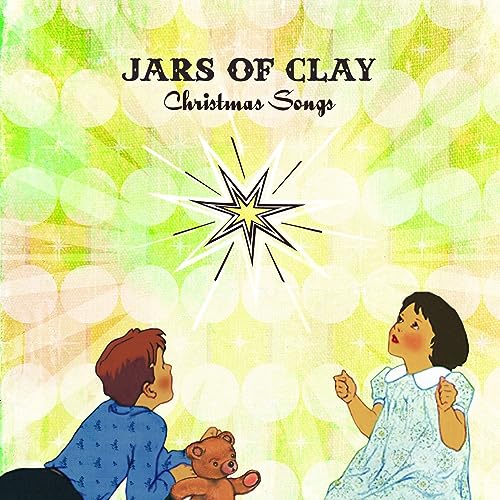 Initial thoughts: One of the most thought-provoking and captivating CCM/rock Christmas albums ever. Definitely underrated; and an album that showcases lead singer Dan Haseltine’s stirring and powerful vocals, making me appreciate the group’s unassuming nature and their willingness to challenge the status quo

Reason to listen: Simply because this album isn’t pop. It’s rock, it’s alternative, and it’s vastly different to anything that I’ve ever heard.

Reason to buy: See above. Jars of Clay’s Christmas Songs has shades of U2, David Bowie, Coldplay, Larry Norman and Petra. Have you ever heard a Christmas album that bucks the trend of radio and instead delivers a plethora of rock based songs? Nope, me neither!

Reason to skip: Only if you love pop music- then you’ll find that Jars of Clay do rock, and hence they may not be for you!

No. of originals: 7 (inclusive of an acoustic version of “Peace Is Here” and a Paul McCartney cover)

No of guest artists: None. Although Jars of Clay do not traditionally feature guest vocalists for any of their albums- aside from the guest vocal heavy The Shelter in 2010, whereby the heartbeat and essence of the album was to intentionally record songs with others in community amongst friends and fellow believers.

Does it have heart?: It’s hard to say. These guys are passionate, but the way Dan’s voice sounds naturally when he sings- it’s hard to tell whether he’s really passionate about the songs or only a little bit passionate. The songs are hopeful and encouraging and they do have heart though. How much heart… I’ll leave up to you all to judge.

Does it have a Christmas-y atmosphere?: Lots of light keys and bells/whistles like Christmas songs from Michael W. Smith. But also loads of guitars and powerful riffs like a rock album. How about a Christmas-y rocky atmosphere?

Uniqueness?: Unique in the sense that there’s never really been a highly publicised Christmas ‘rock’ album. However ‘different’ may scare people away… and in that sense this uniqueness may work against them.

Christmas message: There is indeed a Christmas message there- songs like “I Heard The Bells On Christmas Day”, “O Little Town Of Bethlehem”, “God Rest Ye Merry Gentlemen”, “Drummer Boy” and “Gabriel’s Message” anchor the project biblically, lyrically and thematically. Yet there are positive, holiday anthems abounding as well- so this album is for everyone who loves Christmas for all types of reasons.

Closing thoughts: Christmas Songs won’t be an instantaneous love affair, however this album is more of an acquired taste. Yet I firmly believe that it’s one of the most underrated and one of the most heartwarming and encouraging Christmas albums in recent memory. But make no mistake- if you want to buy this album… then you might be out of luck. This album by no means is popular… so if you happen to stumble upon it, I’d say buy it because it’s a rare gem you probably won’t find again!

3 songs to listen to: Wonderful Christmastime, Drummer Boy, I Heard The Bells On Christmas Day

Yes/no; why/why not?: Yes. It’s a rock Christmas album- something different. If you can’t buy the album, then stream it multiple times, then share with your friends until they love it too!