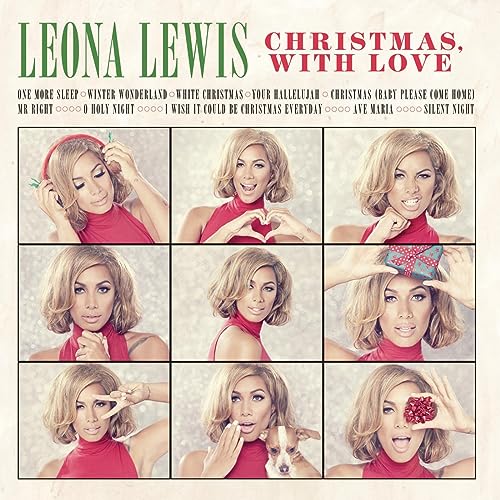 Initial thoughts: The widely popular British pop/gospel/r&b singer with the smash hit single “Footprints In The Sand” released her first Christmas album in 2013. Of course I decided to take notice this year when I was searching for ‘new’ Christmas music to listen to! What is the result of me spinning Leona’s album though? It’s a pop album through and through, and a holiday album through and through (with a few worshipful tunes thrown in for variety!). As it stands, Christmas With Love is a solid, but not ground-breaking album, and I’d say listen on Spotify and only buy if you’re a die-hard Leona fan or a fan of gospel/r&b music!

Reason to listen: Christmas With Love will bring a smile to your face no doubt, as the first half of the project is a myriad of jovial and happy melodies. There’s a few sombre and reflective melodies in the back end of the album- and for this musical diversity alone, Leona should be praised, and this album explored at least once.

Reason to buy: Sadly, I haven’t been convinced yet to buy this album. I’ve listened to this project a few times and each time the songs are inspiring, the flow is good… but the replay value is a bit low- it’s an ok project but there’s not a song that stands out to me unfortunately, save for the lead single and opening track “One More Sleep”!

No. of originals: 4 (including a Wizzard cover!)

No of guest artists: None. Leona’s voice though is so powerful and emotive that she doesn’t need guest vocals! Her voice is near perfection here!

Does it have heart?: Gospel singers and r&b singers always sing with so much passion and enthusiasm. So it stands to reason that Leona will follow suit. And she does- yet whether her passion and heart is genuine remains anyone’s guess. I’d like to believe that she means what she’s singing, but because this album is only ‘so-so’ for me- quite possibly I reckon that I’d connect with these songs if Leona’s passion was more akin to her passion on like “Footprints In The Sand” and other songs on her debut album.

Does it have a Christmas-y atmosphere?: Plentiful. Bells ringing and a children’s choir… you could also think that some of these songs were present in Christmas movies as a backdrop to a scene or in the credits of a Christmas film.

Uniqueness?: As unique as Christmas albums from gospel/r&b singers go. I personally enjoyed Christmas albumsd from Whitney Houston and Mariah Carey much, much more though.

Christmas message: Only “O Holy Night” and “Silent Night” proclaim the truth about Jesus Christ. Otherwise this is yet another Christmas album for the general public. That’s not to say that it’s a bad album. But rather strong believers in Jesus may find not hat much in common with Christmas In Love

Closing thoughts: Spin on Spotify- buy if you want to. But if you don’t like the album- then I won’t be forcing you to listen to this, put it this way!

3 songs to listen to: One More Sleep, Your Hallelujah, I Wish It Could Be Christmas Everyday

Yes/no; why/why not?: If you want to add Leona Lewis’ album to your collection, you can. But it’s not essential. If you already have Christmas albums from Whitney Houston and Mariah Carey, then this definitely isn’t needed!