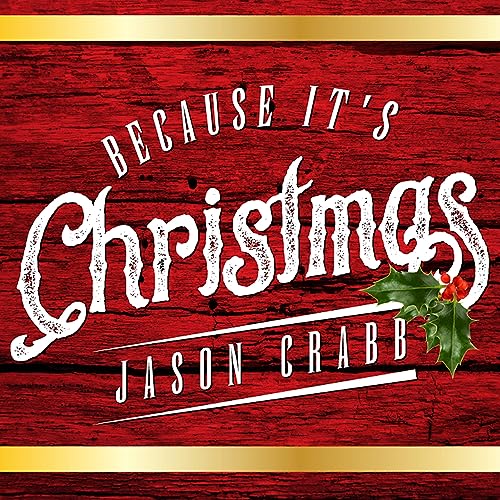 Label: Through the Fire Ministries

Initial thoughts: An artist that has been able to bridge the gap between country music and CCM over the years, Jason’s been at it for a while. Since releasing his self-titled album way back in 2009, to his chart-topping success album Love is Stronger to his CCM-esque Whatever the Road; Jason’s rise to acclaim and respect has come at a time where we see crossovers between CCM and _____ happen more frequently and regularly…and that is a good thing. Jason’s 2010 Christmas album Because It’s Christmas is a welcomed surprise for me- with a Celine Dion cover (‘Don’t Save it All For Christmas Day’), a song made famous by Rascal Flatts (but was actually by 4Him vocalist Mark Harris) (‘Strange Way to Save the World’), as well as other standout original tracks (‘Joseph’, ‘Let’s Make a Baby King’); Jason’s 11 track album is one of celebration and joy, and the original/cover songs are maybe even more enjoyable than the holiday/carols (as it really should be).

Reason to listen: Because you’re a fan of country music, CCM, or both. Or you’re a fan of Jason Crabb’s music. Or you want to check out 6 (out of the 11) original tracks/covers on this album, because it actually interests you to see people either write their own Christmas songs, or sing other people’s Christmas songs, compared to the countless times people cover ‘carols’ and ‘holiday songs’ to death. Jason’s album is actually a great reminder for me, that the more originally-written Christmas songs an album has, the more excited I am for that particular album. Yes, carols and holiday songs are good, but I think people understand that they’ve been sung to death; and want and crave something new during Christmastime.

Reason to buy: Because you’re a Jason Crabb enthusiast, or even because you want something unique and different in your Christmas catalogue. Or just see above to ‘reason to listen’.

Reason to skip: Eehhh…don’t skip it? No seriously, don’t skip this album. Jason has some great country-like takes on classics like ‘Go Tell it On the Mountain’, ‘Mary Did You Know’ and ‘I’ll Be Home for Christmas’, while also giving us a male version of ‘Don’t Save It All For Christmas Day’. Even ‘Silent Night’ wasn’t all that bad. What more could you ask for?

No. of obscure songs: None

Does it have heart?: Tremendously. I think a lot of southern gospel/country/CCM artists have heart. Jason has always created songs that are heartfelt and emotional, and through this listening experience, you can tell that this isn’t a show for him. There’s a sense of gravity when it comes to singing these words, and with songs like ‘Strange Way to Save the World’ and ‘Don’t Save it All For Christmas Day’, you can tell that Jason is in the business of singing songs that he really means.

Does it have a Christmas-y atmosphere?: it’s got a country/southern gospel atmosphere, does that count?

Uniqueness?: Within the CCM circle, yes this album is unique. Because I do believe that not many people who create southern gospel music are as awarded for it, as Jason is; nor do I believe that they are as recognised as Jason is- as of now, Jason is the poster boy (to put it blunt) for southern gospel music- and he’s definitely leading the way with this Christmas album.

Christmas message: A lot and a whole lot more. Songs like ‘Strange Way to Save the World’, plus the carols, remind us of the importance of the Birth of Christ, whilst original songs ‘Joseph’, ‘Reach Out’ and ‘Let’s Make the Baby Sing’ deliver are more down-to-earth and relatable portrayal of the Biblical story which is Christ’s birth.

3 songs to listen to: Strange Way to Save the World, Joseph, Don’t Save it All For Christmas Day