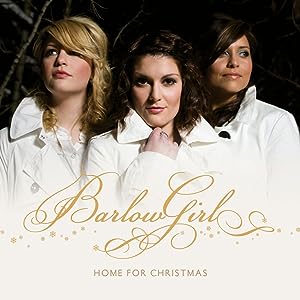 Initial thoughts: Released 12 years ago, CCM rockers Barlowgirl bucked the trend in delivering quite possibly one of the most emotive and heartfelt piano/jazz inspired album full of Christmas carols (with just one original track) in all of CCM history, I reckon. Becca, Alyssa and Lauren Barlow will forever be remembered for songs like ‘Never Alone’, ‘Beautiful Ending’ and ‘I Need You To Love Me’; and Home For Christmas will be remembered for its powerful harmonies and beautiful musical arrangements. A perfect album to put on to get people in the mood for Christmas. A must-have for any person in their Christmas album collection.

Reason to listen: It’s BarlowGirl. It’s nostalgic. It’s 12 years ago. They make carols enjoyable and interesting again. After years upon years of people around the world, covering Christmas songs to death, here comes Home For Christmas that has a sense of joy and vibrancy to it. I’ve been a fan of it when it was unveiled in 2008, and I’m still a fan of it now!

Reason to buy: It’s 12 years old and still awesome. No, seriously, with a powerful emotive and heartfelt song ‘Hallelujah (Light Has Come)’- that song alone should warrant a listen and hopefully a purchase (yes, I said purchase) from anyone who wants to hear joyful jazz from a band that usually does rock music. Though BarlowGirl aren’t active right now, their music will continue to inspire and impact, Home For Christmas included.

No of guest artists: no guests, but I reckon both Alyssa and Lauren sing on the same song in some instances? With voices like these, then guest vocalists are not necessary.

Does it have heart?: Immensely so. Just listen to ‘Hallelujah (Light Has Come)’ without crying, and come tell me something different. In fact, from that song alone, we get to see the vulnerability of the sisters and the emotion and poignancy conveyed to us in the whole Christmas album.

Does it have a Christmas-y atmosphere?: Does it ever! Whistles and bells, piano and string instruments, harmonies, everything that makes this album feel like it’s from the 1990s (except for the originally written song) when we know it isn’t. Which is a very good job in trying to disguise the era of when it was recorded. With the album relying more on the piano and strings, rather than electric guitars (in a lot of other Christmas album releases), BarlowGirl’s album is a joy to listen to even now, years upon years after release!

Uniqueness?: It is unique when you compare it to the ‘modern’ day Christmas albums (2000s onward), but still feels the same when placed against the 1990s Christmas albums. I dunno about that statement that I just said, do with it what you will. Regardless of uniqueness, passion and heart are undeniable, and should be a driving factor in whether this album is listened to or not.

Christmas message: Definitely. Christ is shown to us in ‘Hallelujah (Light Has Come)’, and a few other carols like ‘O Little Town of Bethlehem’, ‘What Child is This’, ‘Go, Tell it on the Mountain’ and ‘O Come, O Come Emmanuel’, to name a few. Reminds us all of the active faith of the band when they were creating the music, and also reminding us of the real reason why Christmas is celebrated- and it’s more than just giving each other presents.

Closing thoughts: If you love great harmonies between sisters, and want to see them create a great Christmas album in a jazz-style rather than a rock atmosphere (that they are known for the most), then Home For Christmas is a must. In fact, BarlowGirl’s album is just a classic, and should be checked out on Spotify at once. You’ll thank me for it!

3 songs to listen to: O Little Town of Bethlehem, Hallelujah (Light Has Come), I’ll Be Home For Christmas

Yes/no; why/why not?: Yes, a big resounding yes. To be reminded in 2020 of the great album in 2008 that the now-disbanded band BarlowGirl has created, what better way to experience Christmas 2020 than that? BarlowGirl will certainly be missed, and this album is a reminder that bodies of work should transcend the artist everytime- and just because a band has decided to split, doesn’t mean their work can’t have impact and meaning years into the future- which is what Home For Christmas has done for me, year after year after year.