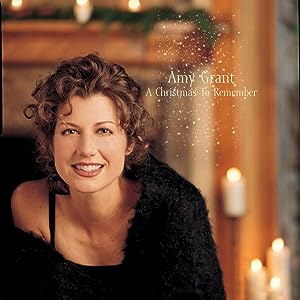 A Christmas to Remember

Initial thoughts: One of Amy’s many, many Christmas albums, but for me, it’s the one that I remember first when thinking of any Christmas/holiday album she has done throughout her tenure of more than 30 years in the music industry. This album released in 1999, and standing at 11 tracks, features a mixture of Christmas carols, obscure songs attributed with Christmas, alongside originally penned songs by Amy herself. And featuring songs like the Michael W. Smith written ‘Agnus Dei’ to finish off the Christmas album in worshipful fashion, what’s not to like about this album?

Reason to listen: A bout of nostalgia and a lot of it. When I was growing up, my musical listening experience was limited, so for me as an adult, revisiting albums, especially Christmas albums, of my own past, is refreshing to say the least. With a more piano/strings presence throughout the whole album, Amy’s reflective Christmas album will be perfect to listen to in the background when decorating the house during Decembertime, or when you’re wrapping presents at last-minute.

Reason to buy: It’s Amy Grant, is there any other reason? When you’re faced with an icon like Amy, you take notice for every album she releases, even Christmas releases. With standout songs here on the album being that of ‘A Christmas to Remember’, ‘Christmas Can’t Be Very Far Away’ and even the instrumental ‘Highland Cathedral’; this is a must-have if you enjoy anything Amy Grant, love Christmas albums with a jazz piano-friendly undertone, or if you love Christmas albums full stop. But I guess for anyone else…check it out on Spotify first. I mean, it’s Amy Grant…it does deserve one listen-through, right?

Reason to skip: Anyone who loves a move vibrant and joyful presence here on the album would be actually very disappointed with this album. With virtually every single song on the album feeling mellow and reflective (aside from ‘Agnus Dei’ and the title track), this album can feel like a bore if you’re expecting the album to deliver upbeat songs that celebrate the season. If that is what you’re after, then gift this album to a friend, and check out for yourself, a more upbeat jazz-inspired Christmas album in Michael Buble’s Christmas.

No of guest artists: none. And maybe that’s better that way- as I’ve heard from various other Christmas releases, sometimes guest artists often detract from the album, and make it seem busier than a Christmas album should

Does it have heart?: Very much so. Amy’s a very passionate singer, and it comes through in this album release. Enthusiasm and passion galore, Amy’s previous hits of ‘Breath of Heaven’ and ‘Grown Up Christmas List’ (on previous Christmas albums), pave the way for original songs here ‘A Christmas To Remember’ and ‘Christmas Can’t Be Very Far Away’.

Does it have a Christmas-y atmosphere?: With string instruments, piano presence, bells and whistles (quite literally), this 1990s album does everything it can to emulate a Christmas atmosphere distinct to the Northern atmosphere. There is also a distinctive 1990s sound which can also be attributed here as well. But all in all, an album with a trademark Christmas sound that can bring people in that appreciate the traditionalism of maintaining a certain ‘atmosphere’ when crafting a Christmas album collection.

Uniqueness?: No, not really. As seen in the above statement, there is a typical 1990s Christmas sound, and this album has it as well. With other standout Christmas albums being that of Avalon’s Joy and Rebecca St. James’s Christmas to name a few, Amy’s album, if we didn’t know it was Amy, would’ve unfortunately fallen by the wayside a little- it’s not that unique musically- there’s a lot of albums unveiled around that time that emulate a 1990s sound, and so the only big saving grace for this album is Amy Grant and her presence and prominence as an artist that can hopefully encourage people to hear this album.

Christmas message: Aside from ‘Silent Night’ (which is on virtually every Christmas album- regardless of it being in the mainstream or the CCM circles), and ‘Agnus Dei’, the album is predominately a mainstream feat. Which is ok- maybe Amy’s album release is more geared towards people who may not celebrate Christmas for the reasons that Christians do- but if you’re looking for the gospel to be preached in every single Christmas song, then this album isn’t really for you- maybe check out Rebecca St. James’s Christmas album instead.

Closing thoughts: If anyone who is into 1990s style music, and Christmas music at that, then this is an album to purchase, pronto. If you are a fan of Amy’s music, then this is a must-have too. Basically, this album, no matter how ‘reflective’ or ‘slow’ this album is pace-wise, is a classic and a great way to be reminded that albums from yesteryear can still bring people joy and cheer, even now in 2020 when we as a nation and the world really need it.

3 songs to listen to: A Christmas to Remember, Agnus Dei, Welcome to Our World

Yes/no; why/why not?: Yes, because it’s Amy Grant. Because it’s the 1990s. Because that era of music is good. Because we need to be reminded of what real music is, rather than the layered EDM of today. Because jazz/piano-prominent music is very much underrated. Need I go on?