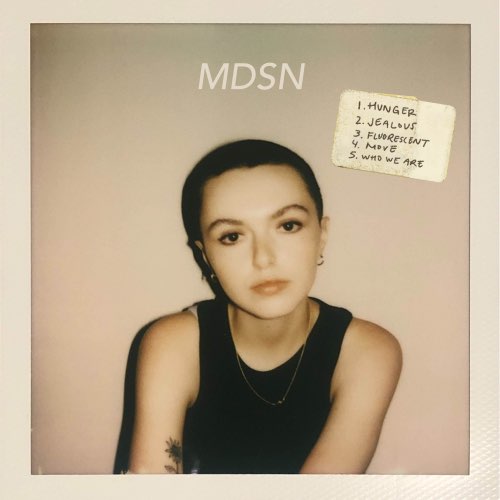 Madison Grace Binion, or Gracie as she is known by her parents (and I guess by everyone else who knows her personally)- a young girl at 16 years of age- is mature way beyond her years, and a young singer/songwriter and worship leader that I’m sure we will all be blessed to hear on the radio and in albums for a long, long time. Having released her debut single “Kerosene” in 2017; the daughter of Nicole and David Binion (lead worshippers of Covenant Worship) has had quite a remarkable ride in getting to where she is today as an Integrity Music artist. From being one of the few songwriters in the running for her pop song to be chosen as the theme song for the Disney TV series Girl Meets World (which ultimately didn’t happen) to now being an artist and changing the world through worship music under the moniker MDSN (the consonants of her first name, and pronounced ‘Madison’!); we are now blessed to her Gracie’s debut EP Mdsn – EP, which released this past week. It’s been a while since the unveiling of Madison’s debut single “Kerosene”, so let’s dive deep a bit, to see what makes MDSN an artist to be on the lookout for!

Immediately we are blessed with hearing a couple of familiar tracks. “Who We Are” is a pop/worship song through and through, and musically a slower paced piano led ballad, with this out-of-the-box single yet again doesn’t fit the mould of Integrity Music, and feels like a Hollyn song (which isn’t a bad thing!). Yet a deeper look makes me conclude that Integrity Music is the perfect label at this point for Gracie! “Who We Are” is sure to touch the lives of many, as Gracie doesn’t try to be like other worship/pop artists in this song. She’s her own person, and that’s what makes all these songs so unique and so like her; even though they’re very different stylistically. Sure, MDSN sounds similar to both Riley Clemmons and Selena Gomez vocally and Britt Nicole, TobyMac, Group 1 Crew and Y&F musically…but Gracie has placed her own imprint onto the pop genre; an imprint that I am quickly being very impressed by. As Gracie passionately gives it her all and ardently relays to us that we know exactly who we are because of Jesus alive in us; this track is just as powerful and compelling as Gracie’s previous singles. “Hunger” is more subdued, as Gracie passionately gives it her all and ardently relays to us that ‘…there’s a hunger and a thirst, I am desperate, immerse me, and I’m not waiting, not anymore, ’cause I need You, Lord…’; and hopefully this song is a soon-to-be staple on Sunday mornings in churches in the near future. As MDSN deserves the praise, hopefully this song will propel her to new heights far beyond everything she could ever imagine. That’s how hopeful and real Gracie’s joy and love for Jesus is, that I want to outwardly proclaim his goodness and sovereignty as well. Well done Gracie for a compelling new track that is a standout on this EP!

Out of the total ‘brand new’ tracks, we are met with a batch of impressive tunes which thoroughly engage and impact. “Jealous” is nearly 5 minutes, and is a heartfelt, reflective and contemplative ballad, whereby Gracie eloquently relays to us the unconditional love God has for us, and the fact that ‘…there is no horizon, no distance You won’t cover, all of You pursues me ’til all I am is Yours…’; while the electronic and laid back pop tune “Fluorescent” vibrantly and beautifully describes God’s love as being fluorescent and illuminating the darkest of spaces. “Move” is the final song which is new, and one of the poppiest songs I’ve heard all year, as this testimony-style track has Gracie declaring that she never wants to go back to the way life used to be, and instead she wants to go wherever God moves and wherever He is leading.

Sure to be a mainstay in Christian music for a long time yet, MDSN has stamped her commanding presence on Integrity Music, and in time, I reckon Mdsn – EP will be on everyone’s lips. It does remain to be seen what genre Gracie will venture into with the rest of her music to be released at a later date (what would a full length album sound like and look like?), but I for one am confident that no matter the style, God will be glorified. So what are you waiting for? If you haven’t listened to the EP, you are in for a real treat. And if you have, then why not listen to it again? And again, and again…

3 songs to listen to: Hunger, Move, Who We Are