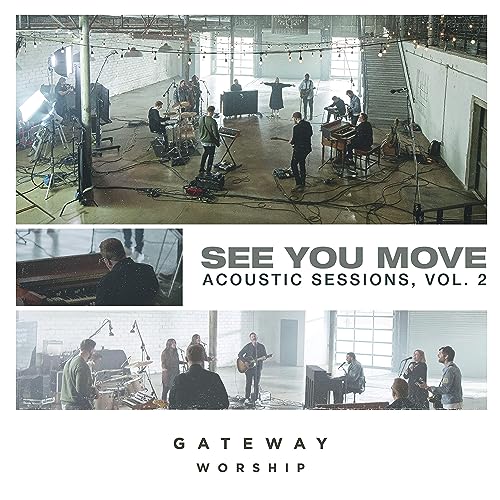 Isn’t it about time that worship music just slow down for just a second? Hillsong Worship, Vertical Worship, Jesus Culture, Bethel Music, Passion, Elevation Worship, Planetshakers, Hillsong UNITED, Hillsong Young & Free… the world is right now somewhat saturated with worship music- and it seems like all of these bands and movements are still going strong, and none of them are slowing down at all. Enter in GATEWAY WORSHIP, recently signed to Integrity Music, and formerly signed to Fair Trade Services- another worship movement led by Mark Harris, former lead singer of 90’s vocal group 4Him. With the group’s latest live effort Greater Than having released a couple of years ago, we are blessed to hear 14 new worship songs, accessible for the church as well as impacting and engaging to listen to, as we ardently give God all the praise and the glory. Fast Forward to now, and we’re blessed to hear another release from the band. See You Move: Acoustic Sessions, Vol. 2 released last week, and with Acoustic Sessions Vol. 1 having released in 2018 (which I myself have not heard at all, of which I will soon need to rectify!), I was intrigued as to how this EP would sound like considering how much I loved Greater Than. I wanted to know what sets these songs apart from other EP’s and other acoustic projects? Or is this EP just plain average? Sure, I can sing to these songs quite well, but will I remember them in a few months’ time or even a year’s time?

Now if you’re a fan of any of the aforementioned worship bands and artists, then See You Move: Acoustic Sessions, Vol. 2 is for you. Mark Harris is as passionate as ever on his lone track that he has contributed to (granted, this is the first GATEWAY album I have listened to- though I did listen to a few of Mark Harris’s solo songs!), and he leads the team to communion with God, with him on this project, as well as on Greater Than presenting us with reflective ballads as well as celebratory high-octane energetic pop anthems. And although See You Move: Acoustic Sessions, Vol. 2 has a greater emphasis on the poppier and more upbeat material; at nowhere during the melodies did I feel bored and disinterested. However here’s a disclaimer that I feel that you all need to remember. And it is this- that this ‘acoustic’ EP isn’t acoustic at all! There’s still drums, synth, electric guitar, acoustic guitar, electronics… if you can get past the ‘deceiving’ marketing issue, then I guess we’re all good to go! EP opener “Always Holding On” is as joyous, celebratory and energetic as any other upbeat worship song, as lead singer Cole earnestly relays to us that Jesus’ love is always holding onto us, even in the worst of our situations. It’s a simple concept, but the passion here is undeniable, and the vocal similarities to The Afters front man Josh Havens is eerily uncanny.

The title track and vulnerable piano ballad is next. With Lauren vocally sounding 99% like CCM powerhouse Natalie Grant; this only works in the favour of the song, as we are met with confidence and assuredness that God moving in our lives will happen, even if it isn’t in the time frame that we would like it to be. Leeland Mooring from the band Leeland guests in the next track “I Have A Savior”, which is a personal favourite of mine, and a potential modern hymn. “I Have A Savior” actually sounds like it could be a recorded as a Leeland song sometime in the future; while “Good To Me”, probably the only weak point on the project, has Levi delivering a passionate track that reiterates that Jesus is good, yet it’s a track that I don’t connect with that much for some reason- mainly because the concept of God being good has been sung to death, from “Good Good Father” (Chris Tomlin), “God, You’re So Good” (Passion), “Good Grace” (UNITED), “Goodness Of God” (Bethel Music) and “Lord Let Your Glory Fall (You Are Good)” (Matt Redman).

“All Your Plans”, a reflective and poignant piano led ballad, earnestly declares that every one of Jesus’ plans are perfect for us, and all the time, even if we think that we know better in a certain moment; while Mark Harris leads “At The Mention”- a track that could be covered by Hillsong Worship or Passion, and be equally as powerful, with Mark highlighting the importance of Jesus’ name, that ‘…life is spoken, curses broken, at the mention of the name of Jesus, death awakens, hell is shaken, at the mention of the name of Jesus…’. See You Move: Acoustic Sessions Vol. 2 ends with the comforting piano ballad “In The Shadow”, where lead singer Jamie powerfully delivers one of the most impacting tracks on the EP, and sings out that even in times we feel lost and afraid, Jesus is right there with us, and we can rest easy because He is present in the shadows and in the darkest places… especially then.

Though probably right now not as popular as other worship movements, it is my hope and prediction that in the coming weeks and months, GATEWAY WORSHIP’s See You Move: Acoustic Sessions Vol. 2 will be big in the CCM, and in churches as songs are introduced into Sunday morning setlists. As an EP on the whole, this project is very cohesive (even though it’s not an acoustic EP by strict definition!) and Mark Harris is to be proud and congratulated. With the group already recording a studio album (Monuments from 2017) and a live album (Greater Than) as well as this EP, maybe the next thing to do is a covers album or a Christmas album? Regardless this group isn’t like the other worship movements I’ve heard before- and that’s definitely a good thing. So what are you waiting for? It’s time to worship God and see Him move, isn’t that right?

3 songs to listen to: See You Move, I Have A Savior, At The Mention