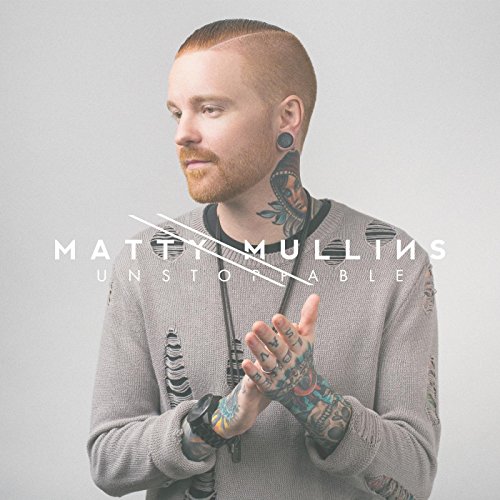 Signed to BEC Recordings just this year, Matty Mullins, to some listeners is a bit of a mystery, an enigma. Particularly because the band he is currently fronting, the metalcore band Memphis May Fire, is so vastly different in genre to what Matty has recently presented, both in his rock/alternative debut self-titled solo album in 2014, and his much more radio friendly single this year “Unstoppable”- and it’s probably difficult for some to reconcile those two genres and facets of music to the same singer. For many of the die-hard fans of the band, Matty’s signing to BEC Recordings could be considered a step down creatively in a lyrical sense. Yet for me, someone who has no prior knowledge of Matty the solo artist, or Matty as the frontman of Memphis May Fire; the song “Unsttoppable”, which released earlier this year, caught me by surprise, with its catchiness, and has me intrigued and interested for the rest of the album releasing later in 2017.

With BEC Recordings home to artists like Kutless, All Things New, Among The Thirsty, Citizens and Saints, 7eventh Time Down, David Dunn and Dustin Krensue to name a few; Matty’s introduction certainly firms up a line-up that is probably one of the most underrated Christian labels in recent times. And just as we have reviewed singles from Abigail Duhon (“I’m Not Ashamed”), Jeremy Camp (“I’m Not Ashamed”), Britt Nicole (“Through Your Eyes”) and David Dunn (“I Wanna Go Back”); we have decided to present our thoughts on this short 2 minute pop tune, given the impact the song will surely have at radio and the timely and relevant message Matty eloquently conveys.

Recorded as a duet with Centricity Music artist Jordan Feliz, “Unstoppable” is short but to the point, and driven by explosive and powerful synth, as Matty earnest recounts that God’s love is all around us, that creation itself shows us that ‘…you can’t push it out, can’t shut it down, when we look around, denying it is impossible, through the night, in the darkest times, I believe his light still shines, this love is unstoppable…’. Reminding us of God’s earnest and ever chasing love which never ends and never relents, “Unstoppable”, despite its poppy nature, and almost too-over produced musical style, is undeniably catchy and worth the listen, given the relevance lyrically to today, where society generally believes that love isn’t without condition, whereas Matty earnestly and profoundly proclaims that God’s love knows no end, no boundaries, that it never stops and keeps on going, even when we feel we’re too far gone! What a freeing notion that we all need to grab a hold of and run with! Well done Matty for a revelatory notion that is sure to provide healing for many listeners!

For someone who hasn’t heard any album from Matty Mullins nor his band before, I reckon “Unstoppable”, despite the obvious CCM-ness oozing out from the track, is nevertheless thoroughly enjoyable to listen to. How will many die hard fans of Matty and Memphis May Fire take the song? Well, I’m not sure and only time will tell. Matty’s BEC Recordings’ debut will drop later this year, but for now, the jury’s still out. Though as Matty has poured out his heart and soul into a song that will surely be on rotation on radio for a sustained period of time, his emotion and unequivocal passion for Jesus is sure to be infectious and contagious as we sing along that ‘…love[‘s] unstoppable, anything is possible, I want the world to know…’. A radio single, that’ll be a standout amongst the label groups throughout 2017 so far; BEC Recordings have definitely signed an artist that’ll only enhance their artist roster even more. Well done Matty for such an inspiring song, and on that fact alone, I can’t wait to hear Matty’s new project which will surely be one of my most anticipated albums of 2017!