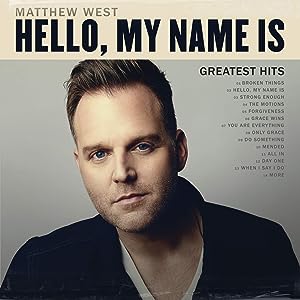 Matthew West has been on a mission of late. Ever since his 2010 chart-topping album Story of Your Life (and inclusive of that album), Matthew has been writing new songs at his cabin in the woods, for often months at a time. And during those moments of solitude, Matthew has been reading stories from fans around the world, and writing songs based on and inspired by these stories. In effect, Matthew’s songs from 2010 onward have not been about himself and his own struggles, rather, the messages have come from all of us. The fans, the everyday people. And when we hear a track that we know is inspired by a fan, it makes the song ever more raw, real, honest and relatable. Not that any other song written by any other artist is of void of passion and enthusiasm. It’s just that there’s something unique and different when it comes to hearing an album solely inspired by someone else, other than the artist and their journey themselves. It makes the process of recording much more inclusive and impacting. That is what Matthew has been embarking on these last little while, resulting in The Story of Your Life (2010), Into the Light (2012), Live Forever (2015) and All In (2017) and unearthing radio singles like “Strong Enough”, “My Own Little World”, “Hello, My Name is”, “Do Something”, “Forgiveness”, “Grace Wins”, “All In”, “Broken Things”, “Mended” and “Day One”. Now here in 2019, we see Matthew move labels, from Capitol CMG (where he was on for his entire career) to Provident Label Group. Maybe it’s a contractual obligation, maybe its just as innocent as delivering a greatest hits album, but whatever the motivation, we see a compilation album release just this last Friday (2nd August), under the Capitol CMG label, of 14 of Matthew’s greatest hits, spanning his career in music from 2005 til now!

Matthew has been fervent and honest to the call to write not about himself but about others for the better part of his career. Much of his songs have shown a sense of relatableness in regard to it being universally applicable, which isn’t necessarily a bad thing at all. It’s just that with such a wide a storied career as Matthew has had, you can’t really condense all the hits down into 14 tracks, there’s always going to be some song missing. And it is that reason alone why I place this album at 3.5/5- nothing else. The songs are great. The whole atmosphere of a Matthew West song is why I reckon he can and probably will become the next new Steven Curtis Chapman- give it a few more years. But what I’ve realised is that when creating a compilations albums, its never a real true reflection of the impact and reach an artist really has- it just focuses on hits and radio singles, never really much about the song that is often forgotten on an album by the general public at large, but still impacts that one person in their walk in life. Hello My Name Is: Greatest Hits states that these 14 songs are Matthew’s most most impacting and challenging to listeners. And this is undoubtedly true- these fourteen songs are some of Matthew’s most inspired. But to stop there and not search any further would be a travesty. For every song that has been included in this 14 track album (More, Strong Enough, Do Something, Forgiveness, Hello My Name Is), songs are indeed missing (Next Thing You Know, History, Something to Say, Save a Place for Me, The Centre, Family Tree, The Beautiful Things We Miss, and the biggest omission of all, My Own Little World). Maybe, considering there were 8 big omissions from this best-of compilation, there should’ve been 2 discs of 10 tracks each to release by the label, delivering the greatest hits, instead of a single disc 14 track version? Regardless, this album is the certain perfect one-stop place for chart topping songs by Matthew, but this is still a very much starting point for anyone who wants to explore Matthew’s music. There is much more music that is good than just these 14 songs, and here’s hoping listeners can understand this and discover that songs not included on this compilation are just as worthy and impactful as these 14 songs!

Matthew’s discography is a wide one, and with many songs that have climbed up the radio charts over the years, his presence in CCM shouldn’t be ignored or even bypassed in favour of other ‘more famous’ CCM artists, like TobyMac, Chris Tomlin, Francesca Battistelli, Newsboys, and the like. Yes, Matthew doesn’t have that much traction or even a following as opposed that all these other aforementioned artists, and that’s ok. His discography speaks for itself. And this compilation should remind us all that just because an album states that it is a one-stop shop for all things ‘greatest hits’, there can still be other songs still great, but miss the final cut on a compilation, for whatever reason. And as Matthew himself moves to Provident Label Group, and now releasing two new songs via that particular label- ‘Unplanned’ and ‘The God Who Stays’, we are reminded that more often than not, a musicians work is never finished, just a different course headed upon. As one chapter at Capitol CMG comes to a close and another at Provident Label Group opens, here’s hoping Matthew continues to deliver to us soul-stirring songs with an everyday-life application. And if ‘The God Who Stays’ is any indication, then we are listeners of Matthew’s music ought to be excited for what is to come, for this artist that, if he’s going the way he is going, should reach the level of impact that Steven Curtis Chapman has, when all is said and done!

3 songs to listen to: Do Something, Hello My Name Is, Forgiveness