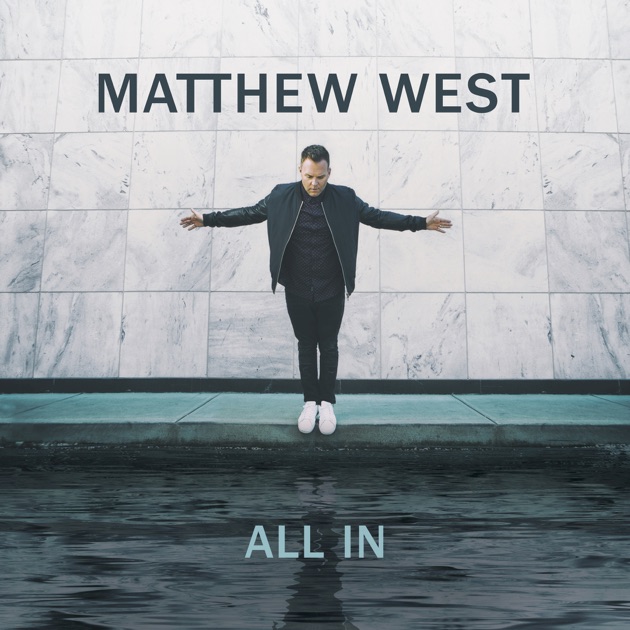 “…The songwriting process for [All In], and every record I make, usually begins with my guitar and my journal. From there, these songs begin to take shape and I get to watch them grow up throughout my time in the studio until they’re all ready to be sent out into the world. But there’s something special to me about revisiting these songs and playing them the way they were first written – leaving some of the bells and whistles behind. That’s why I wanted to re-release this record I’m so proud of, with new versions of some of the songs in a more stripped-down form…” Matthew West is a household name- completely recognisable, and probably the most known for his uncanny knack of taking other people’s stories, and turning them into brilliant exemplary songs; exquisite, personal and honest melodies sure to inspire and take us all by surprise. Songs like “Day One”, “Mended”, “Grace Wins”, “Moved By Mercy”, “Hello My Name Is”, “Two Houses”, “Family Tree”, “My Own Little World”, “Strong Enough”, “Forgiveness”, “Love Stands Waiting”, “Power Of A Prayer”, “Do Something”, “Into The Light” and “Live Forever” have all tugged at our hearts and our emotions. And all of these songs are based on a story, sent in from a listener as a letter form- a story Matthew found compelling, redemptive and necessary to transcribe into song, so that the world can hear the power of God transforming another’s life. So, with three albums based on the concept of a songwriter possessing the responsibility of being a storyteller, (The Story Of Your Life in 2010, Into The Light in 2012 and Live Forever in 2015), the question was ‘what next for Matthew?’- and this time the answer was All In, which released last year, and re-released this past week with 5 acoustic bonus tracks.

Now All In is very different musically, and even lyrically to its three predecessors, and I guess you could say that this album is 10 or so years in the making- in opinion this feels like a direct sequel to 2008’s You Are Everything, both in genre and in theme. While my brother Jon has reviewed the 14-track version of All In last year (which you can read here!), I’ve decided to not go into detail at all about every single song. It kind of makes this review a bit redundant if I did that. But rather, let me tell you why I reckon this album is probably one of Matthew’s crowning achievements, both objectively and personally.

See, way back in 2007, when Matthew was writing for Something To Say, he experienced somewhat of a cist or polyp in his vocal chords that had to be removed via surgery, resulting in a successful operation…but Matthew had to not say a single word for seven weeks. That was part of the healing process, in that while Matthew was silent, he listened to other people’s stories and realised that there were plenty of people out there with no voice…and it was time for him to be that voice. What eventuated was I guess a new outlook for Matthew, and a vulnerable heartfelt melody about the overall ordeal on You Are Everything, called “The Motions”, where Matthew eloquently describes how he no longer wants to coast through life, but instead do everything intentionally and with a whole heart, that ‘…I don’t want to go one more day, without Your all consuming passion inside of me…’. I would say it was then that he made the decision to write songs with more meaning and more of a purpose- and had Matthew not gone through that surgery, or not even had the polyp in the first place, we possibly may not have heard albums like the last three- in the sense that Matthew probably would’ve been writing more songs about himself and his family instead of receiving stories from people from the other side of the globe. But you know the saying of ‘the more things change, the more they don’t’. I’d say that’s what happened with the theme of All In, as in my opinion, the theme of All In has been heard before- in fact 10 years ago on You Are Everything– the notion of us being actively on fire for Jesus, and having Him permeate through our entire life.

All In, or more specifically the title track, hones in on the notion that we should be all in for God; and is a declaration where we cry out to God and emphatically relay that we want to be more in than ever before. More in our family life, our work life, our spiritual life, in every aspect. It’s an admirable quest that we should all aspire to attain, but the notion of being all in, in this album, stems from the fact that Matthew spent many a time away from his family, while writing songs of other people. And while Matthew later found out that he was becoming busier touring and maybe subconsciously placing a greater importance on writing songs more so than spending time with his family, I’d say that his focus shifted a bit when his daughter asked him if someone else can spread the good news about Jesus instead of him, so that he could stay home and spend time with his family. Those wise words from someone at such a young age floored Matthew, and this is probably why hardly anything here is based on other people’s stories and most are based on Matthew’s.

“All In” feels like a direct sequel to “The Motions”, while “Broken Things” speaks about how God is continually using him, a broken person, to spread the gospel in the only way that he knows how- through the power of song. “The Sound Of A Life Changing” (how Matthew got into music), “Something Greater” (how he became a musician in Nashville, and how God made him for something greater!), “Jesus And You” (a love song for his wife) and “The Beautiful Things We Miss” (about spending time with family more so than working all the time!) are all about specific events or certain people in Matthew’s life that are important to him, and each inspire all of us to actively live like Jesus wants us to, all the while remembering who we are, where we’ve come from, where we’re going and what God is leading us to. One of the few songs on All In based on a story from a listener is “Dream Again”, and this song shows us why Matthew still has the crazy knack for taking someone else’s story and making it accessible to all of us, as in this song he tells us that it’s ok to dream, and that we can open our eyes and dream big, because ‘…your lungs are still breathing, your heart is still beating, the end’s where the future begins…’, While “Becoming Me” is another highlight here, as Matthew sings about his mum (with the stirring music video debuting around Mother’s Day this year!) and how he is becoming who he is because of everything she did when he was younger. Kind of like a shout-out to all the mum’s around the world, no doubt this song will be special to maybe all mothers around the world, as we sing a song of gratitude and thanks to those who have raised us.

You know how certain events in our lives can lead us down one direction, but maybe we could still end up in that same direction even if other events transpired? That is probably not the case here, as I reckon that All In is as powerful as it is, simply because Matthew took the lyrical and thematical direct similarities with You Are Everything and added 9 more years of wisdom and experience, as well as lessons he learned along the way from other listeners based on the stories his received for his last three albums. Combining everything together resulted in a near-flawless album, with a new version of All In releasing this week, with 5 of his most popular songs re-recorded in an acoustic light. Do I reckon that if Matthew recorded an album about his own life and his family straight after You Are Everything and not now, that All In would have eventuated? Perhaps, but maybe not. Nonetheless, All In is Matthew at his most vulnerable, and if you don’t believe me, listen to all of the tracks straight through. Then you’ll be blessed, and know that we all can and should live fully and with a whole heart because of what Jesus has done for us. Instead of trying to live more for ourselves, how about we look closer to home, and see how our relationships with those around us are like, and which ones need work. With All In being one of my favourite, and one of the most challenging albums I’ve heard all year last year; it’s great that Matthew has unveiled his album yet again, as we remember not to be a spectator in this life. As we remember that to live life with no regrets we need to be present. And as we remember that to live a life we and Jesus can be proud of, we should be able to declare with confidence that ‘…I’m going all in, headfirst into the deep end, I hear You calling, and this time the fear won’t win…’. There’s one thing to do now. Listen to All In.

So…this is your new favourite album now? Cool, glad I could play a part in you discovering Matthew West and his genius songwriting! Now tell others. This album will probably be one of my favourite albums of this decade. It’s that good! Seriously, it is!

5 songs to listen to: All In, Mercy Is A Song, The Beautiful Things We Miss, Dream Again, Never Ever Give Up