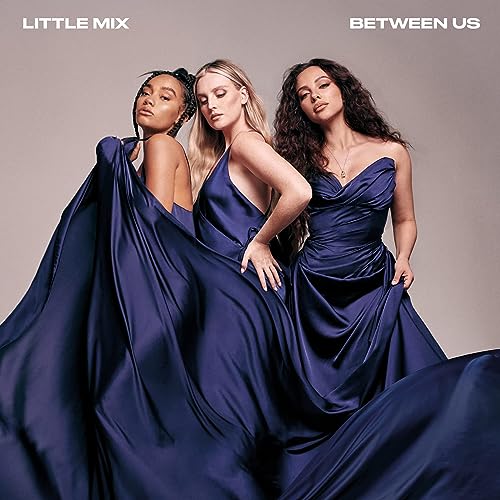 Little Mix are definitely the sucessors of the Spice Girls in terms of popularity and influence. I don’t know if they themselves knew that they were going to be as big popularity-wise, when the band was first started way back in 2011, but here we are now, around 10 years later, and a lot has happened to these 4 ladies that make up Little Mix– Jade Thirlwall, Perrie Edwards, Leigh-Anne Pinnock and Jesy Nelson. Since the band’s launch in 2011, there’s been 6 chart-topping albums- DNA (2012), Salute (2013), Get Weird (2015), Glory Days (2016), LM5 (2018) and Confetti (2020), while original band member Jesy Nelson took a step back from the band (initially) which is now a formal parting of ways between Jesy and the rest of Little Mix. Since then, there’s been a bit of a row between Jesy and the rest of the members of the band (but that’s neither the time nor place to discuss this in this ‘review’), as well as an announcement of a hiatus of the band from 2022 onwards, so that the three individual members could take a break and pursue other interests as well. Nevertheless, and regardless of the ‘drama’ behind the scenes, the band itself has been instrumental in creating a culture of female empowerment, delivering inspirational and anthemic songs over the years that have impacted a lot of people around the world over the last 10 years. We as a site even saw the impact of Little Mix and decided to write a blog about them in 2020– in that blog we discuss the girls’ career and how they are making a difference in the lives of people, and in the realms of music itself, both now and into the future.

Now here we are in December 2021, and Little Mix, after their success of Confetti (and the last album to feature all four members of the band), have released Between Us, a best-of compilation featuring their standout hits from previous albums, a few collaborations, and some original material too. Released in both standard editions and deluxe editions (depending on if the album is purchased digitally or physically), Jade Thirlwall, Leigh-Anne Pinnock and Perrie Edwards have crafted a must-have compilation for any Little Mix fan, and a reminder of why this group has succeeded and excelled all these years. Even if you are not really a Little Mix fan, chances are you’ll know some of these songs, which is reason enough to at least check out this album, at least once.

Who knows, maybe by the end of compilation album, you’ll know why Little Mix stand tall and shoulder to shoulder with Spice Girls- arguably the most impactful and prolific girl group ever to exist. Hiatuses are funny- you never really know if the band are really going to come back, or if the hiatus is going to last longer than the band themselves. Regardless, it’s still a mystery if and when Little Mix would reform after their hiatus. Till then, Between Us is the perfect gift to replay in the car, or to just listen to around the house, as we start to see Little Mix remind us of why girl groups are succeeding right now, and that their impact in the world today is starting to be understood by a lot of people around the world, now more than ever!

Best-of albums are tricky to review. Because you’re not really reviewing the songs. They probably would’ve been reviewed in reviews of previous albums by said artist. You’re actually reviewing the selection of the songs, the order of the songs, and whether the album as a whole would be good to purchase if you didn’t know anything about the band in question. So, to ‘review’ best-of albums isn’t really doing anything new. Nevertheless, considering that I don’t really know much about Little Mix aside from a few select songs here and there (my brother Josh wrote the blog in 2020), what do I think about Between Us? Honestly…it’s a fairly decent best-of album, and though it can become confusing because there’s literally 9 different track listings of the various different versions of the best-of album; Between Us as a whole caters a lot to people- there’s choice if you want to purchase a double disc version of the best-of album, which has different tracks to the digital iTunes deluxe version, which is also different to the standard edition, which also differs from the Super Deluxe Edition as well. No matter which way you slice it, Between Us, any version, offers us the best of what Little Mix has offered throughout their 6 albums, within the confines of the parameters of these different versions of Between Us. Some versions are two discs, some are one, while there are remixes of certain tracks on one version of the album, while there are acoustic versions on the other.

The version of Between Us that I have is the deluxe edition CD, which, for all intents and purposes is decent enough. Sure, the 2CD album unfortunately doesn’t have standout singles like ‘These Four Walls’, ‘Nothing Else Matters’, ‘The Cure’, ‘More than Words’, ‘Not A Pop Song’, ‘Happiness’, ‘Love Me Or Leave Me’ or ‘Weird People’; but what the 2CD album does have, are other standout songs that continue to solidify Little Mix’s presence in an ever-fluctuating and evolving musical industry, especially within the realms of girl groups. Songs like ‘Wings’, ‘Change Your Life’, ‘Break Up Song’, ‘Love Me Like You’, ‘Secret Love Song’, ‘Black Magic’, ‘Salute’, ‘Little Me’, ‘Touch’, ‘Holiday’ and ‘Heartbreak Anthem’ anchor Between Us, both stylistically and thematically; while new songs ‘No’, ‘Between Us’, ‘Love (Sweet Love)’, ‘Cut You Off’ and ‘Trash’ are also present, and showcase the group as a three-piece with such fervent passion, enthusiasm and heart. While the loss of a member in the band could’ve let to Little Mix bringing in a new member and thus shifting the dynamic of the group, what I commend is that the band didn’t replace Jesy, and someone managed to soldier on as a three-piece. And songs like ‘Between Us’ are the result of this. In fact the song ‘Between Us’ itself is a highlight of mine out of all the originals the band has created for the album- the song speaks about camaraderie and friendship, and how if people move away or live their own lives, a friendship can be very strong, that distance won’t break the bond between true friends, that ‘…here’s my vow, starting from here and now, nothing comes between us, nothing comes between us, I swear that we won’t lose this thing we found, cause love will never leave us, nothing comes between us, between us…’

Friendship is a wonderful and beautiful thing, and ‘Between Us’ the song (and the album as an extension as well) celebrates the moments we have experienced with our friends, throughout our lives. Little Mix’s album is a must for anyone who is a ‘Mixer’, while it’s also great if you want to check out the best of the best of their whole career thus far. Though if you want to travel along the Little Mix journey, I suggest DNA and then go from there. Well done, Jade, Perrie, and Leigh-Anne for this near-flawless best-of collection (what would’ve been great would be the combine all the versions and create a super-album!). Hope that the hiatus isn’t that long, and that Little Mix can come back stronger and better than ever, for another decade of awesomeness. Meanwhile…maybe lets all check out solo albums from Jade, Leigh-Anne and Perrie that would possibly be releasing this year/next year? Well done Perrie, Leigh-Anne and Jade for this band Little Mix, and a way for us all to appreciate and respect female bands and realise the need for these styles and bands, within music, period!

10 songs to listen to: Between Us, Break Up Song, Love Me Like You, Secret Love Song, Black Magic, Change Your Life, Salute, Little Me, Wings, Bounce Back