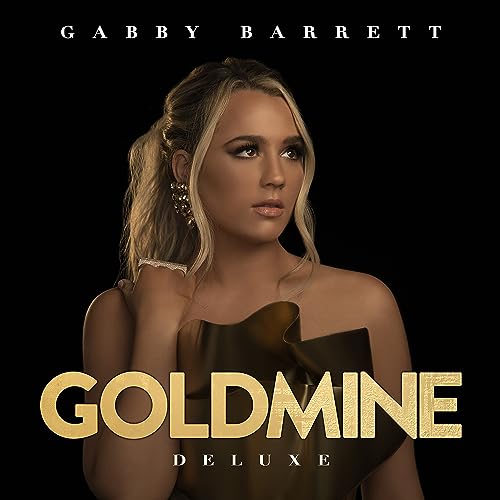 Over the past few years, one of the most popular and inspiring and engaging and encouraging artists to have debuted, would have to be Gabby Barrett. Gabby placed third in American Idol in 2018, and she released her debut album Goldmine last year in June. I reviewed this album, and it was one of the first country albums I listened to from front to back, and hence one of the first country albums I reviewed. I wrote a pretty lengthy introduction and overall review about Gabby’s debut album, and how much it resonated with me. And thus, if you want to check out the review, you can read it here. But the long and short of it, was that (and I quote verbatim!): Gabby Barrett’s Goldmine is a breath of fresh air and incredibly revitalising in my opinion; and Gabby’s faith in Jesus is just the ‘icing on the cake’ on this album. With plenty of standout tracks such as “Footprints On The Moon”, “Thank God”, “I Hope”, “Got Me” and “Strong” to name a few; there’s something about this project that will certainly make me revisit these songs again and again. Call it Gabby’s passion, and fun, infectious bubbly personality. Or you could call it her intense love for Jesus, and the fact that she’s not afraid about speaking for her faith and speaking up in support of fellow Christians. But whatever the case, if you were like me before and not a fan of country music whatsoever, then I firmly believe that Gabby Barrett’s Goldmine will make you a fan. I certainly has for me… For me, I don’t think I’ve ever heard a stronger and more passionate debut project in recent memory- and I’ve heard and reviewed a lot of albums. Last month, Gabby released the deluxe edition of Goldmine; and thus I’d say it definitely makes sense for me to revisit this album, and let you all know whether Gabby has excelled further with these latest four songs or not.

I was influenced a lot by of course what my parents played around me growing up in the car and what I was always hearing, but I really gravitated towards Michael Jackson and his music. I don’t know. There was so much creativity there and so much difference in, so many things he did separated him from a lot of people. I feel like at that time when he was coming out with music, it was just like, “This is Michael Jackson.” And it was always a big deal. And so I don’t know, I just loved him in a lot of ways. I loved the style of music. I originally started out in church singing, so R&B was a very connect to me, R&B and that poppy sound that he had. And so, I don’t know, there was just something special about him that grabbed me. But I learned about his music from my dad.

I’m so very excited about this song [Pick Me Up]. I love it so much. I wrote this with Ross Copperman and Jon Nite. I’ll say that it’s a very laid back, easy country song, because I didn’t really have one of those in my repertoire, if you want to say. And so when we were writing this song, it’s just very laid back and very country vibes. So I love it so much and I’m excited for everybody to hear it. That’s why I wanted to release it a little bit sooner than when the whole deluxe comes out.

I definitely want to be a producer on the album [my second album], 100%. I think that’s something that I definitely want to do and be a part of just because I really like the producing aspect to it and going back and saying, “It needs more of this instrumentation or maybe this, or a fiddle in it or something here,” all of that. And so, because I did do that so much on the ‘Goldmine’ album with just making notes and edits and things, I realized definitely for the second album, I want to be a co-producer on it, and to just continue writing.

I did ‘I Will Always Love You’. I love Dolly Parton, she’s someone I absolutely love and has inspired me in a lot of ways. She always wrote songs that are true to her life and her life story. I kind of did it as a tribute to her. I kind of did it in the style of Whitney Houston, the way that she sang it. I love Country and R&B, so you kind of get the mix of both.

A lot of people said they were using it [The Good Ones] for their weddings, so on my Goldmine (Deluxe) album… I have a wedding version of ‘The Good Ones’ coming out specifically for people who want to use it for those types of events. It’s very special.

And the short answer is… yes! Gabby has outdone herself yet again! These 4 songs enhance Goldmine all the more, and remind me of why Gabby is such a brilliant singer and songwriter. On the standard version of Goldmine, I myself was drawn immensely to the songs that encouraged me and inspired me- songs that were about faith and about life and the ups and the downs. one of my favourites was “Footprints On The Moon”, an inspirational get-up-and-go pop anthem, with Gabby recounting her blessings and inspiring us all relaying that one can chase their dreams and passions just like she did- and with determination and a clear vision, we can conquer and accomplish anything- as after all there were footprints on the moon way back in the day! Another standout to me is “You’re the Only Reason”, as she sings about her thankfulness for Jesus being the only reason why she is where she is right now in every facet of her life, especially her music career. “Thank God”, another standout, is a 3 minute pop tune about gratitude in Jesus towards the good things in her life, especially for her husband, as Gabby reiterates that she wants to ‘…thank God for the hang-ups and the breakups, and the wake-up, make-up tears on my pillowcase, the all wrongs and the almost and the all-time lows all took me to the way my head fits on your shoulder, my heart can’t help but stop, mmm, look at us, how could I not look at you and thank God…’; however it is the worshipful “Got Me” (with worship duo Shane & Shane) that really brings a smile to my face. It is an out-and-out worship song to Jesus- this track makes me immensely proud of Gabby for being so outspoken and unwavering in her faith.

But enough of the standard edition- let’s dive into these 4 new songs, shall we? “Pick Me Up”, a laid back 3-minute love song, speaks about Gabby’s love for her husband, and the fact that he brightens her day up 100%. Gabby also relays to us that whenever her husband picks her up in his truck, and they drive around the country side, she feels safe with him; while the reflective and introspective “Never Get It Back” speaks about the fact that time keeps going on and on and on, and we all need to slow down and appreciate the present more, because ‘…times like these, they go too fast, you blink like that, and you never get it back, never get it back, hold today like it’s your last, once you let go and you never get it back, never get it back…’. “The Good Ones (Wedding Version)”, is a slowed down and piano prominent version of an already inspiring and comforting track, whereby Gabby sings about how her husband is ‘one of the good ones’ and that we all can find that special someone that God has in store for us for the rest of our lives. However to me, the most inspiring and most exemplary part of this deluxe edition of Goldmine is Gabby’s stirring and out of this world cover of “I Will Always Love You”, from Dolly Parton (and later famously covered by Whitney Houston). It’s a rendition that is out of this world, and one that needs to be listened to in depth to be believed and appreciated. So, nothing more to say here except… Gabby, you are a genius. Almost as good as Whitney’s version, and that’s a pretty hard feat to accomplish!

What more can I say about Gabby Barrett? Her intense passion for Jesus and for life in general, is extremely contagious, as is her joy and overall happiness. There’s something special about these four new melodies, and Gabby’s maturity as a singer and a songwriter continues to grow and grow. So go ahead and buy this album. Buy a physical copy of this album (and keep the standard version); that’s how impacting and inspiring I reckon Gabby is and will be in the coming weeks and months and years. Well done Gabby, I can’t wait for studio album #2!

4 songs to listen to: Footprints On The Moon, You’re The Only Reason, Never Get It Back, I Will Always Love You