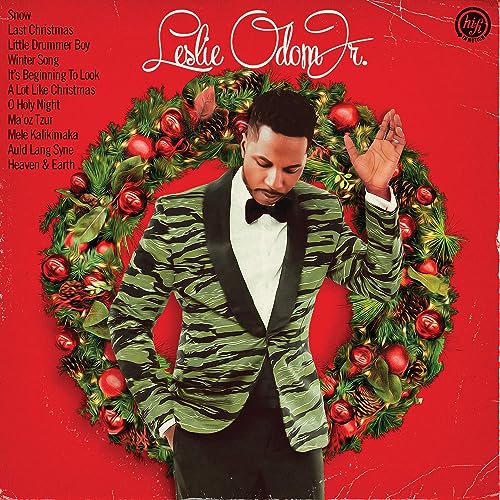 2020 has been a pretty cruel year to most of us. We’re all stuck at home because of COVID-19- and it feels as if 2020 will never end. Never fear everyone, because Christmas music is here. At last, some normalcy , some festive music about the holidays, some inspiring and encouraging music about Jesus’ birth, giving us hope and reassurance that things will get better. One such album that has impacted and struck a chord with me recently, as we lead up to the 25th December, is Leslie Odom Jr.’s new Christmas album called… wait for it… Yep, it’s actually called The Christmas Album. How original, am I right? Note the sarcasm? All jokes aside- I hadn’t heard of Leslie’s music before. Sure I know him here and there from acting (like Smash), and I knew that he could sing- but as far as that I never sought out his music or his movies and shows. Am I ignorant in saying that? not sure, as I believed that there were ‘better’ and much mo0re resonating musicians and singers and actors to be invested in over the years. but you know how COVID-19 is a great leveller, in that it places all of us on the same level, and gives us an opportunity to explore things we would never thought possible, and this includes the type of music we listen to? Yep, that’s the case with Leslie’s music. I decided to take the plunge and listen to The Christmas Album recently, simply because it was a Christmas album, and not because of Leslie’s prowess as a singer and as a performer. But I came away from listening to the album with a lot more appreciation of Leslie’s craft. Can I say that I’m a fan? I wouldn’t go that far, but by no means was the Christmas Album a bad experience.

Overall, Leslie’s Christmas album encompasses the musical genres of dance, jazz, gospel and pop- this is very weird but somehow it works. “Last Christmas” is one of the most boppiest songs on the album, as synth and an EDM musical atmosphere is permeant throughout, and Leslie emphatically reminds us all to guard our heart against heartache, especially during the holidays; while the musically creative and impacting “Little Drummer Boy” is an album highlight, and is recorded with the Mzansi Youth Choir… although nothing can compare with for KING & COUNTRY’s epic rendition.

“It’s Beginning To Look A Lot Like Christmas”, unfortunately one of the lowest points on the album, is as slow as it is lullaby-ish- with even Michael Buble’s version more engaging than this (and Marc Martel’s rendition still reigning supreme!); while “O Holy Night” is solid, and very compelling, although quite short at under 2 minutes. “Ma’oz Tzur”, a ‘carol’ that is completely foreign to me, is in fact a Jewish hymn sung to honour the Jewish faith of Leslie’s wife Nicolette Robinson, while Leslie rounds up The Walls Group and Michea Walls for a joyous and celebratory rendition of “Mele Kalikimaka”, a traditional Hawaiian Christmas carol. As to why Leslie didn’t enlist Hawaiian singers to sing with him… I guess no one knows. But regardless, this song is thoroughly enjoyable as one of the obscure carols- and still is simply a joy to listen to.

“Winter Song”, a cover of a Ronan Keating original (and written by Sara Barielles), is quickened in tempo, and features Cynthia Erivo as a guest vocalist (even though this song isn’t a Christmas song per se!), and for me is an album highlight; while the short but punchy acoustic guitar led “Auld Lang Syne”, a traditionally New Year’s Eve melody, is fitting this year given the hardship we’ve all faced. “Snow” and “Heaven & Earth”, 2 originals,  round out the songs on The Christmas Album; as the former is an upbeat “This Christmas”-type of song; while the latter is a heartfelt prayer to God, thanking Him for moving Heaven and Earth this year- as in making life all the more enjoyable to live in and to be a part of.

With this album being quite obscure (hardly any worshipful songs nor festive holiday songs, and only a couple of originals!), Leslie Odom Jr.’s The Christmas Album is a solid, inspiring and hopeful Christmas experience. It doesn’t reinvent the wheel of Christmas albums, and there are indeed way better Christmas albums out there. But Leslie has recorded with his entire heart, soul, mind and spirit. That should count for something doesn’t it? For those who aren’t that committed to the genre of jazz, gospel, pop and laid back acoustic Christmas melodies- maybe this project won’t be fore you. But I reckon take a listen to this project (or at least the first and last songs) and just see. It’s not my favourite, but it’s not the worst either! Well done Leslie Odom Jr.; I can’t wait to hear what God has for you in the future!

3 songs to listen to: Snow, Winter Song, Heaven And Earth