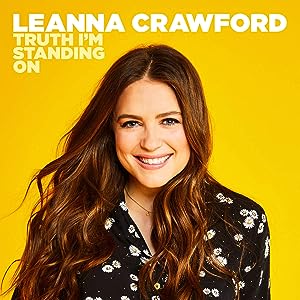 ‘…like a lot of people, I’ve dealt with anxiety and fear. But I’m learning that when it feels like the floor is being ripped out from underneath us, God is the solid rock on which we can hold onto. This new song is the reminder that God promises strength to the weak, faith to the fearful, and comfort to the broken. My prayer is that we would all stand on this truth today and always…’ Upon the heels of her chart-topping and powerful song, albeit a quirky title in ‘Funeral’, recent singer-songwriter and signee to Story House Collective (an imprint of Provident Label Group) Leanna Crawford is now back with yet another powerful single ‘Truth I’m Standing On’. And from both her singles that she’s released thus far under Story House Collective, her future within the Christian music industry is looking ever-so-bright, as this song thematically and biblically is taking on from where ‘Funeral’ left off. As ‘Funeral’ and its theme is about us throwing a funeral for the ‘old us’ and understanding that we are a new creation in Christ; this new track is a reminder of how we have to keep coming back to the truth that we are standing on and resting upon what we believe to be true, even when all things around us tell us the opposite.

Leanna has had a crazy few years of late- since releasing her underrated EP Crazy Beautiful You way back a few years ago, we saw her sign to Matthew West’s imprint label Story House Collective last year, and with that, a release in ‘Funeral’ in February 2020. Now here we are in April and with another release later, Leanna has given to us a passion seen in CCM by females that I personally haven’t seen that much of ever since Lauren Daigle way back in 2014. Yes, with the little I’ve heard of Leanna- from her debut EP as well as her two songs, her passion at the moment is rivalled by Lauren, which speaks volumes of how far along I reckon in her journey, Leanna is- creating a song like ‘The Truth I’m Standing On’ is evidence of this. The song itself? Calling back to the promises and truth that God speaks in His Word, and reminding ourselves of this biblical fact that ‘…this is the truth I’m standing on, even when all my strength is gone, You are faithful forever, and I know You’ll never let me fall, right now I’m choosing to believe, someday soon I’ll look back and see, all the pain had a purpose, Your plan was perfect all along, this is the truth I’m standing on…’

A song to sing during the moments when we can’t see the Lord at work, for whatever reason; Leanna gives us the tools and compass to sing our hearts out as we choose to believe that God’s plan, however uncertain it may look like in this difficult time, is far greater and better than what we can ever believe or think from our own consciousness and imagination. Jesus and His ways are far better than ours, and though we may look at our current situation and believe that not to be true, because of what we see; Leanna invites us to have the conversation with the Lord, that it’s ok to be scared and have doubts, but ultimately understand that God’s truth is far believing and permeating than what we can see in a certain moment. ‘Truth I’m Standing On’ is a song for anyone who seems to be struggling with the current situation of the world right now, and cannot see the truth that God speaks of in His Word being seen currently, and thus, Leanna has created this song for you…well, in fact for everyone, because I guess everyone has felt during this time a sense of worry and doubt, of why we can’t see the promises of God and what He says become reality. Nevertheless, Leanna gives us a reminder of this truth we’re standing on, one that will never change even if we and our circumstances do. Well done Leanna for such a powerful song, and one of my favourites of 2020 thus far.