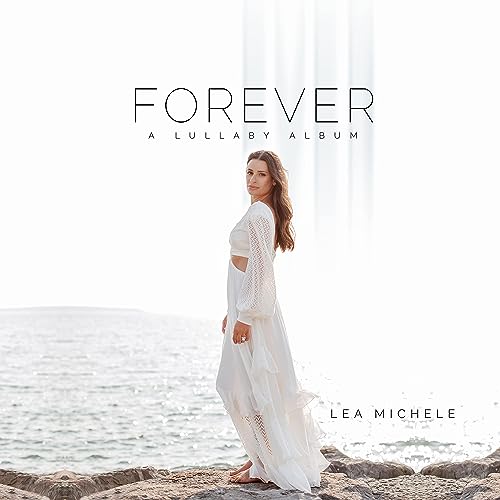 One of the most vulnerable, emotional and personal artists I’ve heard throughout the past few years, is Lea Michele. An artist (and predominately an actor) who shone to stardom through hit TV shows like Glee and Scream Queens; Lea wasn’t an artist who immediately grabbed me from the get-go. However Lea’s presence in Glee and the impact that had on the world, as well as her two emotional, inspiring, hopeful and thought-provoking albums Louder and Places; was all the convincing I needed for me to include her in one of my Momentous Mondays blog posts which I uploaded in 2019. Yes, indeed, I have previously extensively written about Lea’s music and how she has influenced my life… but here I will now expound upon her most recent album Forever. While Lea has also dropped a Christmas album (of which you all can read the review here!), Forever is her first non-Christmas project in 4 years. Although it’s not an actual album of all-original material (and is instead a lullaby album full of covers, written for her son), Forever nonetheless comforts, heals, and reminds us all that we’re not alone.

COVID-19 has really wrecked us beyond anything we could ever imagine… but it’s album like this one from Lea that make us believe in people again, make us trust in the human spirit. And though not littered with any hint of anything spiritual or ‘religious’, I do believe God is inhabiting Forever and using this project for His glory and our good. If you want to read about Lea and the journey from Glee until now, well then read my post in full before reading this review- just because it is pointless for me to rehash and repeat myself. And now that we’ve all caught up to date…there are thousands and thousands of moving, heartfelt, and timeless classics that have flooded our ears either on radio or on TV (as songs in end credits of movies or made famous from a particular movie) or on albums over the years. Each song with a story behind it, and each song either resonating with us or not. So I guess it comes with no surprise that on Forever Lea has chosen songs that have impacted her as a person, and that can inspire all of us. The result is a project, though light on instrumentation, is overall nothing short of extraordinary and remarkable- and one of my favourite ‘EP’s’ of the year thus far! And as Lea’s strengths as a vocalist lie in being a well-trained and overall awesome Broadway vocalist, it comes with no surprise that this lullaby album focuses on her exemplary vocals- and that is a beautiful thing that Lea has decided to do, to stick to her own strengths, and thus do it well.

It was truly such a joy going back into the studio to record this album Forever. After taking time off of work during my pregnancy and postpartum to be with my son it felt so cathartic and exhilarating to be back in the studio, to sing again, and to do what I love so much. I recorded this album at a beautiful private studio in the woods on the East Coast this past spring. It was very remote and helped bring the perfect peaceful essence to this album that I was hoping it would exude.

Every song that I picked for this album Forever was either a song that I sang during my pregnancy or to my son once he was born. ‘Oh, What a World’ was the first song that I played in my car moments after leaving the doctor when I found out that I was pregnant. ‘Sweet Child O’ Mine’ and ‘Here Comes the Sun’ were two songs that my husband [Zandy Reich] and I played as we drove to the hospital the day he was born. And ‘Somewhere Over the Rainbow’ is one of my favorite songs that I sing to Ever now. So each one of these songs brings back its own set of memories for me. Whether it was a challenging moment in my pregnancy that music helped me get through or a beautiful moment looking into the eyes of my son for the first time, music has always helped heal me in my life and brought me joy and I hope this album does the same for everyone.

Some people would say that Lea’s new album- a covers album- shouldn’t really be looked into, or analysed or discussed or examined… simply because it’s a covers album, and that an original album would be better, showcasing Lea’s song-writing skills. While I myself would have liked to hear a new Lea Michele original album; there’s still no denying that Forever as it stands, with hand=picked songs that mean something to Lea and will inspire and comfort her son one day, is extremely personal for the singer. In fact, given that Lea had postpartum depression after her pregnancy… I reckon Forever is the perfect album for Lea to come back into the fold. Had it been an original… maybe it’d be dark and super depressing? If lullaby albums and reflective records aren’t your thing… then maybe Forever isn’t for you. But once we go into this album knowing what it is… then that’s when we can really appreciate the project for what it is. “Sweet Child Of Mine” (Guns’N’Roses) is the perfect way to start the album, as Lea expresses her unconditional love for her son Ever, while “Here Comes The Sun” (The Beatles) is one of the most jovial songs on the album, as Lea powerfully and emotionally relays that even in the midst of a storm, the sun is just on the other side, and that ‘…I feel that ice is slowly melting…it seems like years since it’s been clear…’. “Somewhere Over The Rainbow”, one of the most iconic songs ever from The Wizard Of Oz, needs no explanation, and Lea absolutely nails this contemplative and reflective version; while the most recent melody covered here is “Oh, What A World”, a cover of Kacey Musgraves’ track from Golden Hour, whereby Lea is curious and grateful for the intricacies and small details of this world, crying out ‘…Oh, what a world, don’t wanna leave, all kinds of magic all around us; it’s hard to believe, thank God it’s not too good to be true, oh, what a world, and then there is you…’.

“Yellow” from Coldplay also holds a special place in Lea’s heart, as she walked down the aisle to a Coldplay song, and it is Ever’s favourite song on the album; while the ballad “Songbird” originally by Fleetwood Mac, is driven by the acoustic guitar, and is an emotionally charged magical melody, with Lea relaying that even the ‘songbirds’ are singing the fact that she loves her son abundantly. One of my favourite ballads ever is “1000 Years” from Christina Perri, and Lea emphatically records this song to pure perfection (this version is in fact the crowning achievement of this album I reckon!); while Forever ends with the Billy Joel cover of “Lullaby”, a song directly sung to Ever, as she quells his worries about the world and reassures him that he will be alright, that ‘…I promised I would never leave you and you should always know, wherever you may go, no matter where you are, I never will be far away…’. Could this song double up as God singing to us and reassuring us that everything is going to be ok? Maybe… Regardless, “Lullaby” ends a beautifully recorded and out-of-this-world listening experience, which begs to be repeated; and so if you’re not a fan of Lea Michele by now, then I guess you will never be.

I wanted to make a lullaby album even before I was a mom, just because I think that it’s such a beautiful genre of music. I’ve always wanted to become a mother, and knowing that I could then use my voice in that way it just was so exciting for me. I left the doctor’s office completely surprised. We’d been trying for a while and unsuccessfully, and then this very surprise miracle happened… and the first thing I did was I put my headphones in and I listened to Kacey Musgraves’ Golden Hour. ’What a World’ came on… and the minute I heard that song and the lyrics, I was like, ‘This is going to be on a lullaby album that I make.’

Here’s my two cents worth about Lea Michele and her music- and especially this album. Even if you’re not a fan of Glee and haven’t heard of Lea’s music before- well I guess you better hop to it and listen to Lea’s first two albums, her Christmas project, and Forever… pronto! Because I believe there probably isn’t another honest and vulnerable artist I’ve heard in recent memory, at least an artist who has gone through such extreme trials and come through the other end with a fresh and clear perspective, with Lea possessing such an exquisite voice that it’s out-of-this-world in a crazy good way, who has moved me in so many ways with her emotional tracks borne out of sadness and pain, but also fashioned together to create something beautiful. We all know Lea from Glee, and also because her boyfriend died in 2013 due to drugs… but with Forever we now know Lea as a mother and as a singer again. An original album from Lea Michele might be coming soon. But until that day comes, let us immerse ourselves in these near-flawless renditions of timeless classics. These classics never get old… and who knows, you may find Lea to quickly be one of your favourite vocalists. Forever may not be the album we all wanted. But it surely is the album we all needed. Well done Lea, I can’t wait to hear what’s in store for you next!