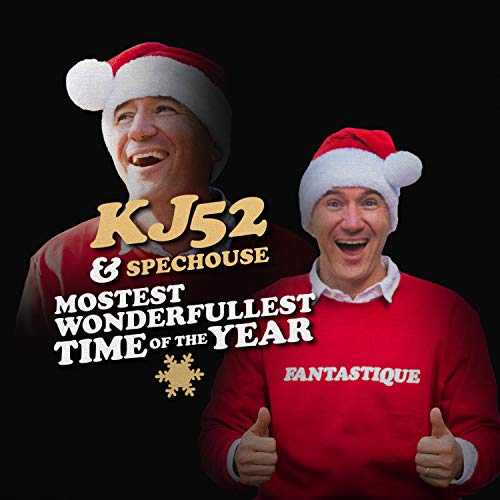 For most of my life, I haven’t had even the slightest inkling to listen to rap, for various reasons. I don’t really know what the reason was, but I do know that there was one indeed- maybe it was a unfounded reason; however, of late, my music tastebuds have changed, and hence arise my appreciation for other genres besides pop and CCM. For me, country gets a good go of it as a genre played on iTunes, yet I reckon ever since I was wowed by artists like Lecrae and NF, rap no longer is stigmatised by myself, now earning a well-deserved spot on my iTunes and Spotify playlists for the foreseeable future. One such rap artist that has shown me that music that isn’t sung but talked really fast, has its merits; is KJ-52– real name Jonah Sorrentino.

If you want to read more about KJ, I wrote a review of Jonah Part 1 last year, and of Jonah Part 2 a few weeks ago as well, so before you check out my thoughts of KJ’s latest album (a Christmas project called Mostest Wonderfullest Time Of The Year), you can take a read of that. Or you can check out his Wikipedia page. But if you are a bit tired (like myself all the time, lol!) and would love the cliff-notes version of what KJ is all about, let me make it brief for you. KJ has recorded plenty of albums, guested in various compilation projects, won plenty of awards, and also received his fair share of online criticism. Yet what KJ has never done is record a Christmas album. That is until this past week. Now we are blessed to hear KJ’s brand new 12-track holiday themed album, and the result is half an hour of quirky fun that has me wishing the album was longer, as it ends just before it truly begins! Full of original melodies and a few well-known classics, were are presented with one of the most unique Christmas projects of the year!

The album is told from the perspective of a fictional character called Dave, played by KJ, and we are introduced to him in a ‘stressful’ monologue intro “Dave Is On Vacay”, as KJ (as Dave) reiterates that he’s feeling anxious from his rowdy kids, and that he can’t wait until he’s on vacation. And as the 50 second interlude ends, we can only hope that Dave gets some respite during the holidays. “Best Time Of The Year”, the first ‘real’ song, follows and has KJ in fine form, rapping like he’s in his 20’s as he celebrates the notion that right now in this moment when he’s celebrating Christmas, is the best time of the year; while “Up On The Housetop” is a frenetic 2 minute stern discussion with Santa (from what I’m hearing!) with Alvin and the Chipmunks as uncredited cameos as well, as KJ delves into the mechanisms behind Santa’s one night a year Christmas present delivery schedule. “Get Out Of My Way” then takes our hero Dave from singing about the best time of the year and having a healthy discussion with Santa, to the shopping mall, as he voices his greviences with everything around him (including disrespectful kids and the general busyness), culminating in the angry chorus ‘…get outta my way…’ repeated four times! And as I watch this music video and laugh at the somewhat over-exaggeration of how people act at the shopping centres; there is an element of truth to that, so let me just say kudos to KJ for opening our eyes to how shoppers really act under pressure; reminding us also that we should avoid the shoppers that will definitely cause a ruckus, if we can.

“Meowy Christmas”, an interlude at just over 90 seconds, is in my opinion 90 seconds too long, as the track serves no purpose if it’s meant to inform us, as it’s just cats singing “Merry Christmas” in their own ‘language’- but it’s quite funny, and maybe this track is needed if the purpose was just for us to have a laugh. While “Silent Night” is a personal highlight, and features an unknown female guest vocalist singing the first verse (presented as a chorus in this track) while KJ effortless and ardently raps about the events leading up to Jesus’ birth and how was a believers should respond to the knowledge of our souls being saved because of Jesus. “Glory, Glory” is next, and features guest vocalist Bookie The Baby, as we are met with possibly the most musically distracting track on the album- it’s worship mixed with Christmas music, and the execution fails to impress, sad to say. However, after the next interlude, which is titled “I’m Offended”, where KJ relays to us that it’s around about now where some of us become offended when the extended family talks about certain issues at the dinner table; the back end of the album gets back on track. “All I Want” is another conversation with Santa, as KJ outlines in great detail what he wants for Christmas (another satire song I think!), while “Go To Bed”, another original, is probably my favourite song on the album, as KJ vents his frustration about his kids wanting to stay up on Christmas Eve at all hours of the night, so his simple instruction to them is ‘go to bed’.

Mostest Wonderfullest Time Of The Year then ends with two more interludes. “Dad Jeans & Christmas Sweaters” has KJ describing to us in depth that he mostly receives jeans and sweaters during the holidays- it’s another ‘venting’ song, that is probably therapeutic for even KJ himself; while “Happy New Years” has KJ debuting brand new music in this song, as well as a re-worked piano version of Auld Yang Syne”. It’s ambitious, but works quite well here- and one bonus of this project overall is that we hear KJ delivering vibrant eclectic versions of lesser known melodies- and his attempt of singing is even reason enough for us to hear the power of God and of Jesus permeating throughout these 12 tunes.

With Mostest Wonderfullest Time Of The Year being somewhat semi-cohesive than both Jonah’s, we are nonetheless inspired and encouraged by KJ-52’s latest offering. Despite a couple of hiccups, inclusive of “Meowy Christmas” and “Glory Glory”; this project is a must listen for 2018, no matter if you love rap or not. In fact, if you love music in general (how could anyone not!), then you will definitely find a song or two that you will love on Jonah Part 2. There’s nothing really more I can say to you that could make you want to listen to the album. So I will say this- take a listen, and if you like it, that’s great. If not, that’s fine too. Personally, I reckon the album is great. The many guest vocalists add a different dynamic (in a good way!) and I cannot wait to see what KJ does next! Well done KJ, can’t wait for your future endeavours! Time for me to watch The Jonah Movie, don’t you think?

3 songs to listen to: Get Out My Way, Silent Night, Go To Bed