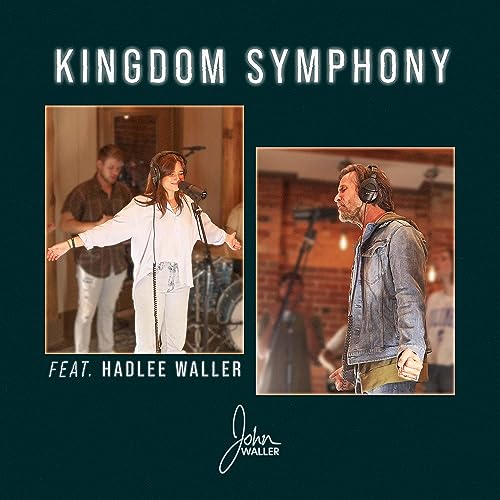 John Waller has had his time in the spotlight. In some ways far more than an average CCM artist. Being touted way back in the day as following in the footsteps of Casting Crowns (who was the artist/band that discovered John and had a hand in the unveiling of John’s label debut, The Blessing), John has been since known for his chart-topping songs like ‘Crazy Faith’ (featured in the powerful movie War Room), ‘While I’m Waiting’ (from the Kirk Cameron movie Fireproof), ‘As For Me And My House’, ‘Still Calls Me Son’, and many, many more. And while John departed Reunion Records mid-way through his career, his message still stayed the same- Christ focused, as we’re reminded to live with abandon, putting into practice the faith we have as a result of what Christ has undertaken on our behalf. John’s passion for the church and delivering songs that can bring listeners hope and a closeness with God has been evident in his music- and together with songs like the ones aforementioned above, comes a heart John has for adoption and taking care of children who don’t have a home for themselves. John has been able to minister to others for years, and his most recent full-length studio album, Explosions of Light, that was released in 2019, was one of my favourite albums of that particular year, with standout songs consisting of tracks like ‘Awakening’, ‘Epic’, ‘Comeback’ and ‘When God Says No’. Now here we are in 2021, and John is at it again, this time, a song that is a follow-up to both ‘But God’ and ‘What My Father Does’ (featuring his daughter Sophee Waller)- ‘Kingdom Symphony’, another duet, this time with daughter Hadlee Waller.

John’s comeback song ‘But God’ was inspired by the Scriptures of 1 Corinthians 1:27 (But God chose the foolish things of the world to shame the wise; God chose the weak things of the world to shame the strong.), and is a song written for a time, space and place of now, where people can cling onto the hope that God still is working, even if and when we can’t see it. ‘What My Father Does’, a duet with Sophee, follows on from ‘But God’, and delves deeper into the theme of expecting the unexpected with our Heavenly Father, to understand that what our Father does, may not always make sense to us at the time, and that’s ok. ‘Kingdom Symphony’ is the third single by John to be released this year; and is a track that reminds us of the analogy between symphonies and the kingdom of God, and that every person has it’s place, has their role, and often work together to accomplish and deliver things that they would otherwise not’ve been able to accomplish alone. The song and corresponding music debuted Friday 24th September; and could potentially be on John’s new upcoming album A Family Thing, alongside ‘What My Father Does’. As John himself divulges, ‘…“Kingdom Symphony” is a very special song to me. There’s something so transcendent about experiencing a symphony live and in person. It’s other worldly. Heavenly. Every instrument plays its part. Sometimes all at once but sometimes they flow in and out. Sometimes certain instruments take the lead and other times those same instruments compliment others. I believe the Kingdom of God is much like a symphony. We all have a role to play, and every part is beautiful. My hope for this song is that it will connect you to God Himself. He is the author and conductor of the Kingdom Symphony…’ With practically radio silence between the release of Explosions of Light and now, John himself initially thought that he wasn’t going to make music ever again. And then he did- he had his ‘but God’ moment (which led to ‘But God’ being created), where God knew that He wasn’t finished with John yet. ‘But God’ challenges us all to continue to place our trust in God, always being reminded that regardless of the situation, He is still working, even if it’s not in the ways that we perceive Him to work. ‘What My Father Does’ carries on from that; and allows us to give thanks and praise to the Lord for the things He does, and the work He’s continuing in us as we become much more at peace with the world around us, and much more receptive of what God is doing in our lives, and those around us. ‘Kingdom Symphony’ finally gives us this hopeful moment where we can see all the intricacies of how a symphony is put together; and be assured and confident that the same things that apply to the workings of a musical masterpiece, can also apply to life and the body of Christ as well.

John Waller’s 3rd album release within a couple of years is still surprising us all, me included. Even though John started off as signed to a label, he is now currently one of my favourite indie artists, alongside others like Kerrie Roberts and Rachael Nemiroff. With heartfelt lyrics and a vertical praise atmosphere to bring about congregational worship, John’s heart for worship, family, adoption, hope, and Christ is all evident within not only this song, but throughout his whole career thus far. Well done John for such an inspired and stirring melody, one that’ll hopefully encourage us all to see around us and look closer to the symphonies that God wants us to be on the lookout for, and how we as followers of Christ, can learn from how a symphony can come together, and thereby apply it to the roles that He has given to us, even in things that we don’t even know yet. Well done John for this powerful duet, maybe more music opportunities from Hadlee Waller in the future?