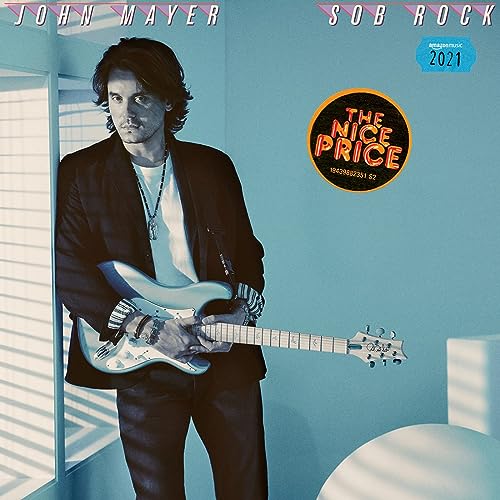 John Mayer has been an artist that has always worn his heart on his sleeve. Since writing about him in a blog last year, I’ve been privy to see the maturity of John over the years, and how his songs have evolved and have had meaning to a lot of people as the years have progressed. Songs like ‘Daughters’, ‘Waiting on the World to Change’, ‘Gravity’, ‘Your Body is a Wonderland’, ‘Slow Dancing in a Burning Room’, ‘The Heart of Life’ and ‘Half of My Heart’ have all been instrumental in changing the sonic and musical landscape over the last 10 – 15 years, with John’s slick ability to play an electric guitar, all the while using his ability to croon his way to each of our hearts. John Mayer’s music, I reckon, would be like how Elvis would’ve sounded like if he started his music career now (instead of the 50s), as John’s unique way of colliding pop, rock, folk and acoustic, all the while having each of these musical genres of his, have an underlying 80s feel, is something unique and remarkable. So, I guess when John unveiled his new album Sob Rock to the world not too long ago, let’s just say I was intrigued to say the least. John’s always been the type of person to be a deep thinker, and his songs over the years have reflected this. Mind you, he’s also had a lot of songs throughout his career that have expounded on failed relationships- with each song written being an ode to the person, these songs have tried to unveil things that he wished he could’ve done differently.

Unfortunately, as much as I can appreciate Sob Rock for all it’s musical genius (maintaining an 80s undertone throughout the whole entire album, is no mean feat), most of the songs here on this new album, are tracks that we’ve heard in one shape or form from him before. There’s only so many albums that you can produce that focus on lament, regret, and longing to do things differently, and that is once again the main premise behind this album as a whole…which is a shame, because earlier on, John delivered some great tunes that weren’t about relationships at all- ‘Belief’ from Continuum examined the dark side about believing something wholeheartedly and all the way, while ‘No Such Thing’ focused on the growing up of becoming an adult and the ‘trials’ that can ‘plague’ someone in a high-school situation. As much as I commend Sob Rock for going all-out on the 80s music references, 4 years break from John to deliver an album about breakups, regrets, lamenting and being alone, is unfortunately underwhelming from an artist that continues to show a lot of talent and promise, but doesn’t really execute on an album that is equally musically exciting and lyrically unimaginative at the same time.

Let me just say from the outset, that this ‘review’ of Sob Rock isn’t your typical review. There’s outlets and publications like pitchfork, NY Times, Rolling Stone, NME, The Ringer, Guitar.com, Junkee and Variety that have all said their 2 cents worth on the highly anticipated album, and so for me to add something else to the mix (which primary isn’t really a good review of the album at all!) seems to be a bit redundant. I guess I let all these publications say what they need to, and you can all make up your mind from there. But what I will say is this, about the album as a whole. Sob Rock, when looking at it all face value, is an album that is musically ingenious- delivering track after track, full of 1980s pop/synth influence isn’t necessarily a walk in the park, and John has done that on the album to his full credit. At face value, one can listen to the album and bypass what’s being said- they can put it on in the background when you’re doing something around the house, and you can enjoy the album for what its worth if you don’t listen too hard to the lyrical content. It can just be a ‘housework’ album, and that’s fine if you view John’s new album as this. But John’s music has always teetered more to the lyrical end, and it is in this vein that I’ve approached Sob Rock, with initial anticipation and expectation, but now with unfortunate disinterest and indifference. This is an album for me that I’ve come to see it as this- if it’s on, it’s on, and I won’t change any of the songs on here. But I won’t necessarily seek out the tracks though. Sure, some individual songs stand out- ‘I Guess I Just Feel Like’ is a moody, broody, gloom-and-doom look about life and the disarray that has happened in the world (and people can relate to this in a COVID-19 world), while ‘New Light’ is about a persona convincing their crush that they are different from what they have been perceived to be. ‘Last Train Home’ is a last-ditch effort by John as he sings to someone else, wanting a decision to be made on their part of whether its full-commitment or walking away, so John knows if he’s boarding the metaphorical ‘train’ of life alone, or with another; while the heartbreakingly emotional ‘Shouldn’t Matter But It Does’ analyses a relationship post-breakup and has John lamenting and brooding over where they went wrong. He tussles between blaming the other person and blaming himself, providing the heartfelt words of how John’s ex ‘…shoulda been honest, shoulda just cried, shoulda told me there was nothing left inside…’, while by the third verse, John himself acknowledges his own part in the relationship breakdown, taking ownership and understanding that ‘…I shouldn’t be angry, I shouldn’t hold on, I shouldn’t leave messages in every little song…’, a reminder to each of us to take ownership for mistakes, and to acknowledge wherever possible our own actions in certain situations and outcomes occurring. While this song is primarily focuses upon a romantic relationship, this song can still be reflective of any other relationship that has unfortunately gone sour- friendships included.

And so that’s Sob Rock– or at least songs that I felt a bit connected to. Everything else just seemed like John was going over old ground and trying too hard- ‘Why You No Love Me’ is a song that pleads with the other person, with John asking them why they don’t love him anymore; while ‘Wild Blue’ is about a relationship breakdown, and how loss and hopelessness are things that come straight after- a depressing way of looking at life, and placing too much value upon a person, so that when they’re gone, you don’t know how to value your life. John sings to his ex-lover in ‘Shot in the Dark’, and is more his broody self as he divulges that ‘…I’ve loved seven other women and they all were you…’ (while the music on the song is emotive and heart-stirring), while ‘When The Right One Comes’ brings listeners some kind of hope for John’s love life (and maybe their own the process), while album enders ‘Carry Me Away’ and ‘All I Want is to Be With You’ continue to focus on past relationships and being stuck- ‘Carry Me Away’ is about longing to move on from the past relationship, under the guise that he’s bored with his life and want’s something new, but still finds himself unable to commit to something new, for whatever reason, while ‘All I Want is to Be With You’ is practically the most neediest song on Sob Rock– in all of the four verses in the track, he laments about how he can’t forget his ex, and that he could find another person if he wanted, but still wants to be with the person he’s not with now.

Sob Rock isn’t an album for people who just want a happy-go-lucky album to listen to on repeat in the background as you’re working at home. No, it’s your deep-thinking album. But therein lies the unfortunate point- that a lot of these songs, in terms of subject matter, are just the same. It’s depressing. I’m feeling a little off after hearing this album about 2 times through. Yes, there’s a time to mourn and lament relationships lost, but knowing John’s own romantic history, Sob Rock seems a little less genuine when looking at the track record of John himself. Nevertheless, this is an album that wasn’t really for me- I did enjoy a few songs here and there, and musically the album sounded good, but just material-wise, I dunno if I’ll check it out again anytime soon. Maybe the next album John should make shouldn’t be about relationships, just to change it up a bit? Or maybe write something a bit happier? Whatever the case, this is an album for the emotional person, and maybe, people who have been faced with a lot during COVID-19 can relate. Whatever the case, John is back with more of the same. Hopefully his next effort, whenever that may be, will be more on a happier note. Till then, let’s listen to Continuum once again through, shall we?

3 songs to listen to: Shouldn’t Matter But It Does, I Guess I Just Feel Like, Last Train Home