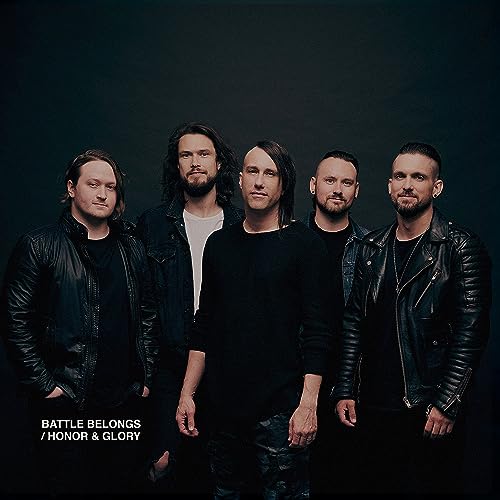 One of the most inspiring, moving, confronting, comforting and worshipful songs over the past year, at least to me, has been the song “Battle Belongs” by Phil Wickham. A rousing, declaratory, in-your-face, powerful anthem that essentially sings out that Jesus is powerful enough to fight our battles for us, as Phil eloquently and emphatically declares that ‘…when all I see is the battle, You see my victory, when all I see is the mountain, You see a mountain moved, and as I walk through the shadow, Your love surrounds me, there’s nothing to fear now for I am safe with You…’, we are met with one of Phil’s best and a song that I’d encourage you all to listen to at least once, just so that you all can experience the awesomeness that is this track. But this song has already been reviewed, and this post isn’t about Phil. Rather, there is a new band who covered this song as their first single. Honor & Glory, comprising of a few members from the rock band Disciple, have released their rock rendition of the worship song as their lead single. And I’m a fan of this song- not such much of Disciple… so I checked it out. How does it rate to me, especially as the first single of an unnamed project? Does this mean that Disciple is disbanding and following in the footsteps of Kutless and Seventh Day Slumber in releasing worship albums?

First things first- nothing can compare to Phil’s original version of the track. It’s moving, powerful and every other positive adjective underneath the sun. But as a cover, Honor & Glory knock this out of the park, so to speak. Lead singer Kevin Young is extremely passionate and compelling; and I’d say this version will bring “Battle Belongs” into a brand-new market that even Phil wouldn’t have envisioned it would move into. Yet will Honor & Glory as an artist be respected in the CCM industry and in the rock music industry, with this melody (a cover song) being their first single? Should Disciple fans be worried about their band possibly breaking up? Those two answers cannot be given straight away- in fact a better indication will be shown to us when their debut album releases. And hence… is this ‘review’ even necessary when we know almost nothing about the band, apart from them being a part of Disciple? Yes, yes, I believe it is. As it reminds us that a song is bigger than its original artist- and “Battle Belongs” is one of those songs. So as we listen to this track and wait for Honor & Glory’s debut album, let us thank God for Phil Wickham. His song will undoubtedly live on in the hearts and souls of many- and hopefully this cover is the first and not the last.

‘Battle Belongs’ just released today in Australia (maybe later on today in the U.S.), and as far as first-singles go (this song is perhaps the first single from an upcoming album from Phil, I think…), this one is by far one of my favourites, since ‘This is Amazing Grace’ way back in 2013. The song itself- declaring to the Lord that the battle is His- that the battle- be it physical or in a spiritual sense, belongs to God, and our weapon in the form of prayer and a steadfast heart running after the Lord and trusting Him in every circumstance, is what needs to be focused on the most as a resource, than a last resort. ‘Battle Belongs’ is a great reminder of how we should be acting, especially in 2020 in the midst of a pandemic. Whatever we’re facing and the struggle that we’re in, we can rest assured that the Lord fights our battles for us- we need only to be still and know He’s God, giving our worries and troubles to Him, maybe even on a daily basis. As Phil himself relays to us, ‘…this is one of those rare songs that I’ve written that has become a part of my everyday life. I’ve carried these words with me and sing them in my heart through the uncertainty of this year. God has used it in my life to bring peace and center my attention on His power and faithfulness. I pray it would bless you as it has blessed me. It releases tonight at midnight. If that’s too late for you then it’ll be there for you in the morning when you wake up as well…’ A song that’s going to be on repeat on my iTunes music playlists for quite some time, this is a perfect way to start each and every Friday- worshipping the Lord in praise, fighting battles on our knees in the acknowledgement that His ways in moving us through trials and difficulties may not look like what we expect, but nevertheless, that’s ok. An artist that is still terribly underrated, even to this day: 17 years removed from his debut album; Phil’s honest songwriting makes his presence in CCM all the more needed, and this song, is no different!