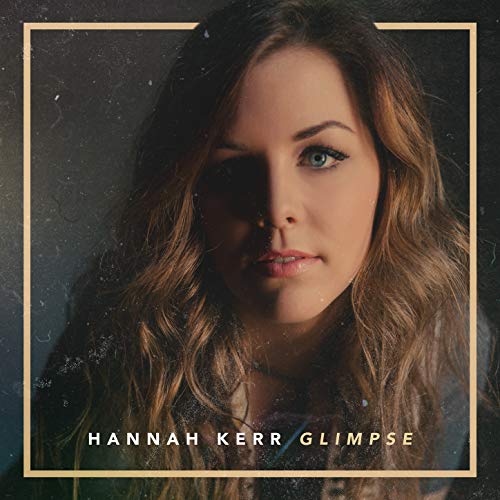 Hannah Kerr is one of today’s most underrated artists in my opinion. Even though her 2016 debut album Overflow (which we reviewed here!) garnered hits such as “I Stand Here”, “Undivided”, “Warrior” and “Radiate” to name a few, Hannah’s name isn’t recognised still. Though at 21 years old, she still has enough time on her hands to forge a following and a big enough fan base in the future for her to be more well-known. Yet though Hannah is underrated, it doesn’t mean her music is by any means second-rate. In fact, I would say that you guys all should watch out for Hannah- because her brand new single “Glimpse”, which released last week, is about to take the world by storm!

Co-written with Riley Friesen and Matt Hammitt, “Glimpse” is as vulnerable as any song this year, and a heartfelt and worshipful melody that you can put on in the background as soaking, reflective and contemplative music, or even turn up really loud as an intentional prophetic tool or something similar. Led by stirring keys and channelling her inner Kari Jobe and Meredith Andrews’ voices; Hannah graciously reiterates the notion that ‘…I’ve only seen a glimpse, all I’ve had are moments, it’s enough, oh, it’s enough, I can’t see it all, but the mystery is holy, and I know, there is so much more than this…’, and reminds us that even if we can’t see Jesus in our lives all the time, the times when we can see glimpses of His overwhelming and eternal qualities, should be enough for us to praise Him for everything He is to us, everything He’s done, everything He’s doing, and everything He’s yet to do. With this song being the lead single of a yet to be named sophomore full length album; “Glimpse” is sure to gain Hannah followers and popularity, as we all are more and more excited as to what God has for her in store next!

Hannah Kerr’s introduction into CCM in 2016 with her debut 11 song project is nothing short of poignant and heartfelt. With her musical style similar somewhat to Casting Crowns in quite possibly every way, it is nonetheless her fervent enthusiasm and passion for the Kingdom, that will definitely propel her to new heights in months to come. With “Glimpse” being one of my favourite songs of the year thus far; any fan of worship music and/or CCM will love this song, and will also be eagerly anticipating Hannah’s brand-new album to be released at a later date. Well done Hannah for such an encouraging and compelling new track. Already looking forward to the next release, be it another single or an EP or a full-length album, whenever it arises.