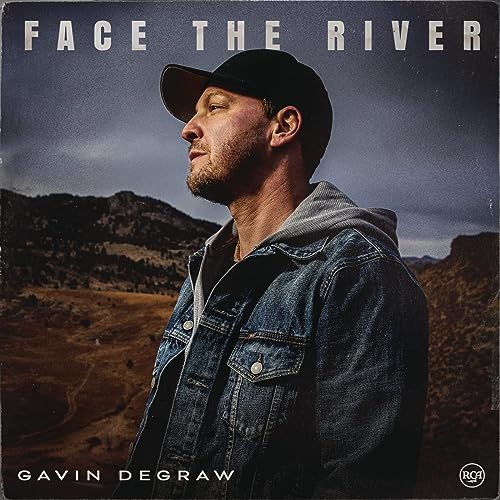 Gavin DeGraw, a singer and songwriter known for his smash hit song “I Don’t Want To Be” (the theme song for the CW teen drama One Tree Hill), is one of the few singers and songwriters right now that can pierce your soul and spirit, and can make even the most hardened of hearts soften. An R&B artist who is known music-genre-wise as someone who records blue eyed soul (a white person trying to sing like a black person); he soared up the charts in the early 2000’s with “I Don’t Want To Be”, while he also had hits like “Soldier”, “Chariot” and his collaboration with Needtobreathe called “Brother”. Gavin has been dormant for 6 years (his previous album Something Worth Saving was released in 2016)… and so when his latest album Face The River released, I was intrigued. All of the song titles sounded inspirational or reflective… and so, I was sold. Never mind that this album was only 10 tracks- because I was going to listen to them and I was going to love them and it probably was going to be my favourite album of the year. But did my lofty expectations match what I heard?

Put it this way… even if you gave me a million dollars just to give this album a great review, I wouldn’t do it. And it is because Face The River was so underwhelming. There is literally no other word to say it. I mean, I could go through the track listing and dissect every song. I normally do this on other reviews. But on this album- writing less about it is actually the best thing, because the less I write about it, the more I’m actually subtly saying- that this album is only worth me saying less than I usually write. The album opener and the lead single is the title track… and it’s actually one of the brighter spots here. Gavin sings earnestly about… facing a river and an ambiguous trial of some sort; yet the vagueness of the lyrics throws me off, and I end up feeling more confused at the end of the song than at the beginning. Also, the more and more I listen to this track, I’m more bewildered about what Gavin is trying to say (what’s the deal with the wild horses?), while the music sounds more and more lullaby-ish.

Unlike the title of the next track, “Summertime” is a dreary ‘pop’ song that plods and meanders along, and lyrically doesn’t really achieve much except for being a song that champions having fun in the summertime; while “Ford” is an equally depressing song- the piano melody features a muddled message, and Gavin actually championing going through the motions at work so that you leave some happiness for when you get home. It’s a weird track, and a melody that doesn’t make sense; while the ballad “Freedom (Johnny’s Song)”, written about his late father, means well, but is yet another track that is lullaby-ish- with this melody also seeming to be a “Livin’ On A Prayer” knockoff, except less engaging. “Greatest Of All Time” is a semi-moving and inspiring mid-tempo gospel type song, as Gavin sings about finding someone in his life to love and to be in a romantic relationship with (and kudos to him for finding someone he connects with on a soul level!), but the song still isn’t the most memorable; while “Destiny” is just plain boring- the execution not carried well at all, and the lyrics vague at best, and downright confusing at worst. Is Gavin singing about something spiritual or about his parents?

“Lighthouse”, a personal and confronting melody about mortality and death, is a piano ballad where Gavin sings to a ‘lighthouse’, asking to be saved and to be safe from the storms of this life (but again, the lyrical ambiguity here hurts the song more than harms it); while “Chasing When” is surprisingly a powerful and engaging song- the R&B/gospel/soul pop anthem speaking about deciding not to chase after what the world thinks is popular, and instead running your own race: a similar in theme to Switchfoot’s “Dare You To Move”. “Hero In This House”, another piano ballad, is probably the most personal song Gavin has recorded, and is a homage and tribute to his late mother; while Face The River ends with the slower-tempo piano ballad “Let Someone In”, a track where Gavin sings to someone, asking them to let him in, either for a romantic relationship or a platonic friendship.

Aside from a few songs, the rest of Face The River isn’t as engaging, compelling, nor cohesive as I would’ve liked and hoped. Gavin DeGraw’s lyrics are all on point, as well as his vulnerability and his passion. Thematically, singing and writing an album about his late parents is something that Gavin ought to be congratulated for. It must have been daunting and no less scary and overwhelming. But something about the overall feel of Face The River doesn’t feel right. I don’t know what it is. But I do know that this release isn’t an album I’d listen to again. But if any of you resonate with this project full of piano ballads, then that’s fine… because we all have different preferences. Face The River on the surface is a great idea. Yet for me, Gavin’s album doesn’t have that ‘wow’ factor- and I’ll spin through earlier projects of Gavin’s instead. How about all of you? Same as me?

3 songs to listen to: Face The River, Chasing When, Hero In Our House