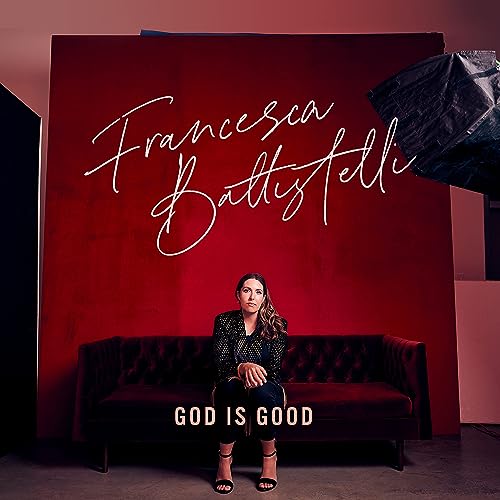 Most people who love CCM (like myself) would know who Francesca Battistelli is. Considering the amount and sheer size of radio hits she’s acquired over the years, from songs like ‘Beautiful, Beautiful’, ‘I’m Letting Go’, ‘Free to Be Me’, and ‘Angel By Your Side’, to ‘If We’re Honest’, ‘Giants Fall’, ‘Write Your Story’ and ‘Strangely Dim’, to name a few; we have been blessed to hear this New Yorker wear her heart on her sleeve in every album release she has delivered to us since her debut project My Paper Heart way back in 2008. One of my favourite female Christian artists, ever, this powerful emotive, heartfelt, singer-songwriter released her last full-length studio album Own It in 2018, and was actually one of my favourite albums of that particular year- with standout songs like first single ‘The Breakup Song’, worshipful ‘Defender’, mainstream-esque ‘This Could Change Everything’, and one of my own personal favourites, 80’s inspired ‘Love Somebody’ (a song that should’ve been a radio single, but wasn’t!). Francesca’s success and continual praise throughout her career thus far on Word Label Group, and also in an industry that is dominated by men, is something to be celebrated, even now as we see a continual rise in the number of women entering into CCM, namely artists like Lauren Daigle, Kari Jobe, Mandisa, Riley Clemmons, Sarah Reeves, Hannah Kerr, Tasha Layton and Leanna Crawford, to name a few (I’m sure there are loads more female artists). Own It continued to establish Francesca’s place in CCM and her impact and influence in and amongst Christian music, and as we stand in mid-2021, Francesca’s at it again- this time releasing a single titled ‘God is Good’, a song to be featured in the fourth installment of the God’s Not Dead movie franchise, God’s Not Dead: We the People.

Let me just say that for me, I enjoyed the God’s Not Dead franchise as a whole. Sure, some of the acting can be a little bit far-fetched, but by and large, the storylines and plot points weren’t all that outlandish and wild- the franchise itself made be at least intrigued to check out the movies at least once, and besides- I always admired the work of David A.R. White, one of the actors in recent memory that actually creates decent Christian material (aside from the Kendrick Brothers). So, when the trailer for God’s Not Dead 4 surfaced online earlier this year, I was interested, to say the least. And so…will I watch the movie when it comes out later on during the year? Maybe, maybe not. Since I’m in Australia, I’m not really all across the whole ‘homeschooling’ idea that Americans, at least conservative Americans, seem to gravitate towards. Homeschooling and the education system seem to be the topic of God’s Not Dead 4, and while I’m probably not the person to comment about an education system that is different from my very own Australian one, I will say this though- that unfortunately, the acting in this upcoming movie (as seen through the trailer) is a tad underwhelming. I didn’t find myself excited after watching the trailer for said movie, and I felt like the franchise was just milking another movie for the sake of it. Nevertheless, Francesca actually plays a role in the movie, as according to TheChristianBeat, a ‘…homeschool mom Rebecca McKinnon, who testifies on behalf of her family, her community and her strong Christian beliefs in order to preserve religious freedom…’

My thoughts on the movie aside, ‘God is Good’ the song is actually ok. Not necessarily her most ‘wow’ song in her whole music discography (leave that to tracks like ‘Beautiful Beautiful’, ‘He Knows My Name’, ‘Giants Fall’, ‘Motion of Mercy’ and ‘Strangely Dim’), but nevertheless, still ok. A song that is accompanied by acoustic guitars, light looping percussion and Francesca’s trademark soulful voice; we see Francesca declare God’s goodness irrespective of the season that we are in. As Francesca testifies herself, ‘…a few years ago, a good friend of ours went through a devastating loss. I really wanted to write a song that would honor what he went through and really speak to that idea of how tragedy affects our lives, because at one point or another, it does affect all of us. If the last year-and-a-half has taught us anything, it’s that we’re not immune to difficult times. It’s been a hard season, and this song has brought me a lot of comfort, because through it all, there is one constant, and that is that God is good. So no matter what you’re facing today, I pray that this song would bless you and bring you hope and peace, because He is good and He is for you and He loves you so much…’ A ‘run-of-the-mill’ radio-friendly track that I’m certain will go far enough on radio, ‘God is Good’ is a welcomed splash back into the foray of originally written music for Francesca (Own It released back in 2018), and while the song for me didn’t grab me as much as other songs in Francesca’s past, ‘God is Good’ is still a song that will do well for her chart-wise, and maybe I can appreciate the musical and lyrical ‘simplicity’ of the song as the months continue to clock on. Well done Francesca for the long-awaited wait back into new music, hopefully a full-length album is not too far away.