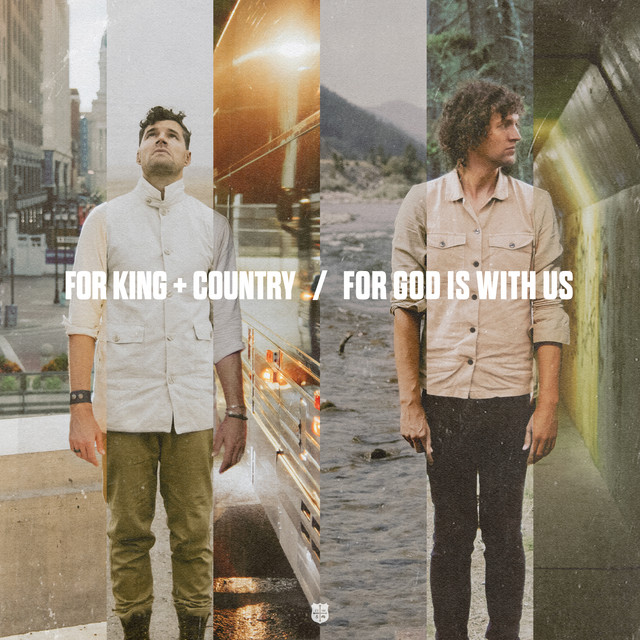 For KING AND COUNTRY have been a band that are a joy to listen to, and no matter the preference of musical genre, I’m sure, that anyone who hears this infectiously hopeful and poignant duo, are sure to be blessed and encouraged. Relatively new compared to a lot of the CCM pioneers that have shaped what Christian music is today, we have covered the band a lot here on 365DaysOfInsipringMedia.com, and so whatever I wrote about the band in previous posts, I won’t rehash now. What I will say is that both Joel and Luke have created a duo that have challenged us listeners to stretch the bow a little bit in terms of the classification of music that is deemed ‘Christian’, and really remind us, that God can speak to us through a variety of different means, not just solely through ‘Christian’ influences. The duo released their long-awaited single ‘Relate’, not too long ago, and now just today, has released their brand-new song, ‘For God is With Us’.

Dare to imagine, dare to believe in
A true love that gave us, a brand-new beginning
No room for a king, no celebration and no ceremony
In that little town, no, nobody would think
This is the story of the coming glory
Can you hear the prayers the people prayed?
Can you see the skies begin to break?
When Heaven and Earth were face-to-face
Oh, how the world forever changed
For God is with us, God is with us

Excerpt of the Lyrics of ‘For God is With Us’

For KING & COUNTRY’s new song is as joyous as it is poignant, as orchestral as it is resounding and compelling. Joel and Luke have crafted together a song that deeply proclaims so earnestly and fiercely that our God is with us, in the moments of yesteryear when He was born God incarnate as Jesus all those years ago, and is also with us now, even during moments when we may not ‘see’ or ‘feel’ Him also. Every song this duo has created has always been thought-provoking and heartfelt, and this song is no different. For I reckon it was good that ‘Together’ the track (the duo released that song in mid-2020) to take off and become a quasi-crossover hit that it did.

Because ever since the duo received the exposure that ‘Together’ gave them, the duo have had a sense of creating songs fit for both the mainstream and CCM audiences- the duo presented ‘Relate’ that could’ve easily been released to mainstream radio, and now on ‘For God is With Us’, the song itself has an ‘epic-cinematic’ quality, and that even though the song is much more Christianese-explicit compared to both ‘Together’ and ‘Relate’, I still reckon that their song that dropped digitally today, can easily be climbing the charts on mainstream radio too. A song that requires us to firmly believe the words of God being with us as we sing it, we are indeed reminded of this very fact, and that even during such a ‘hopeless’ time we’re in, we’re still called to believe that God is always with us, especially in the moments of now in this polarising time as it is. God being with us doesn’t change regardless of how we feel, and this song is a powerful reminder of that. A song that will be on repeat on my Spotify playlists for quite some time, Joel and Luke have given to us, arguably one of 2021’s most emotional pop/CCM track in quite some time. Well done for KING & COUNTRY for this song, can’t wait for whenever album #4 comes, sooner or later!